Succession planning: Now more essential than ever before 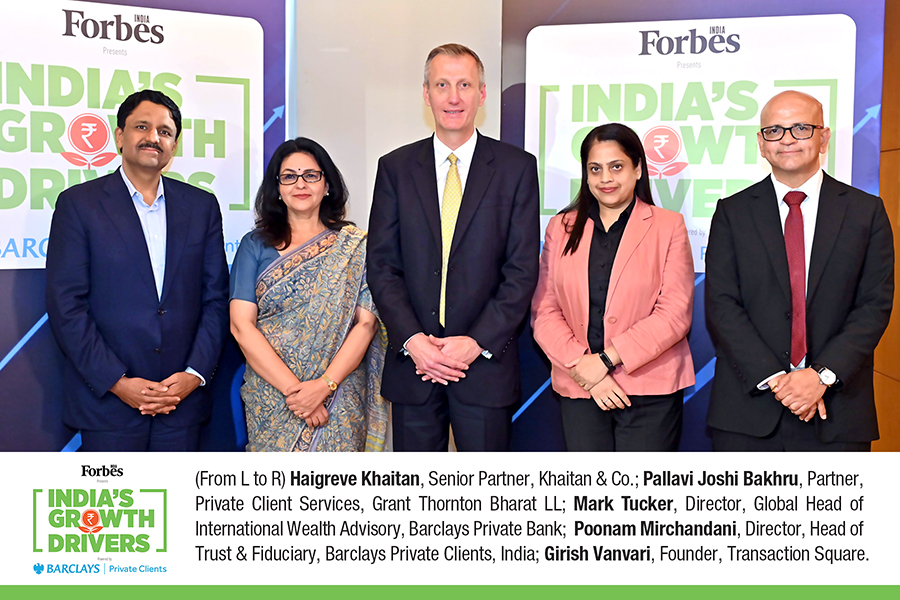 Corporate succession planning is as old as business itself. Every company, big and small, has to grapple with the situation where a celebrated boss has to hand over the reins to the next business titan.  The conundrum is higher still in a family-owned business where a lot depends on the will and inclination of the heir-apparent to take the business ahead.  Then there are siblings and extended family, all wanting a share of the pie.

Indian companies, said Mr Vanvari, are predominantly “founder-driven”. Over time some promoters have realised that succession planning needs to be taken seriously if investors have to be won over. To resolve family disputes, the process needs to govern the next steps rather than the people themselves.

Studies suggests that just a fifth of Indian organisations have considered having a succession roadmap. Ms Bakhru echoed the same sentiments while stating that if a private equity player is to be approached for external funding, they will or definitely should, look at succession as part of their due diligence process.

Indeed such a change of gears from one generation to another has its own set of challenges, said Mr Khaitan. The odds of dispute rise over time as families grow larger. Family members debate and bicker over who has voting and management rights. 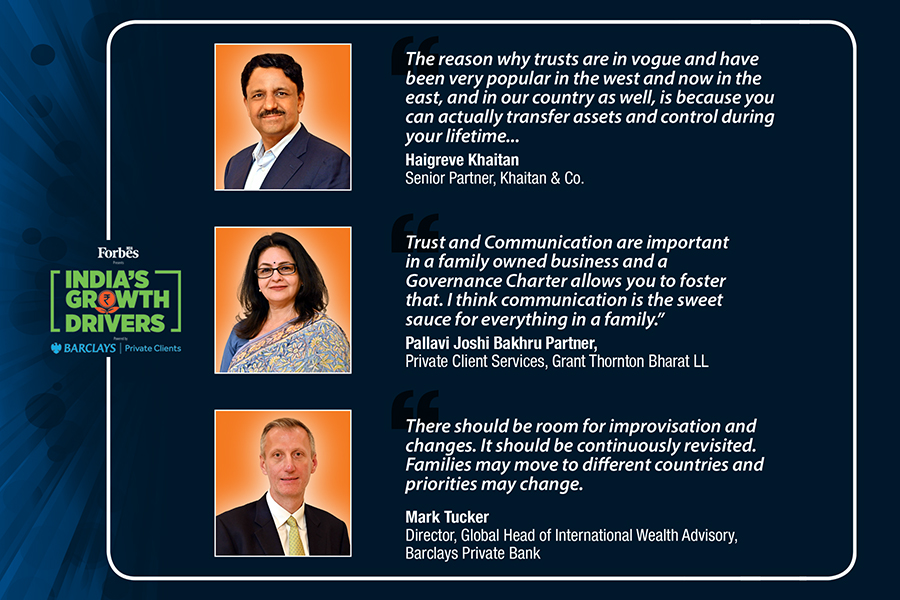 Succession planning: An elephant in the room“No one wants to talk about succession”, according to Ms Mirchandani because it raises the question of “mortality”. It’s a subject that families tend not to raise. “Families are worried the moment they will talk about it, mortality will be round the corner.”

The overall decision is not only rational but “hugely emotional”, said Mr Tucker. This is true of all companies whether in India or abroad. The only difference in the West is that the concept of succession planning has entered the mainstream and business owners are far more open to talk about it and plan for it. “Indians as a community”, added Mr Vanvari, “don’t let go because there is a fear that if you do so, you will no longer be relevant”. It’s hardly surprising that many business leaders continue to hold the top job well into their 80s.

The founding entrepreneurs or the generations thereafter are also seen as accommodating. For instance, if a younger son is not up to the task, instead of setting him aside, they may make him a joint managing director. But the tide is turning, even if at a glacial pace, said Mr Vanvari. Whether on account of fear of missing out or in the quest to become a professionally-driven outfit, companies are now talking about succession planning.

When you are a large-listed company, you don’t have a choice”, said Ms Bakhru. “You’ve reached that scale and need to have a succession plan in place” but when it comes to Privately Held family businesses, there needs to be a concerted effort. We also need to appreciate that while succession planning is “not a statutory requirement”,  “A Board as it has a fiduciary responsibility towards its shareholders can nudge promoters in the right direction for ensuring long term value creation”. Ms Bakhru emphasised the fact that “Whether it’s a planned succession or an emergency succession, there needs to be a backup plan.” 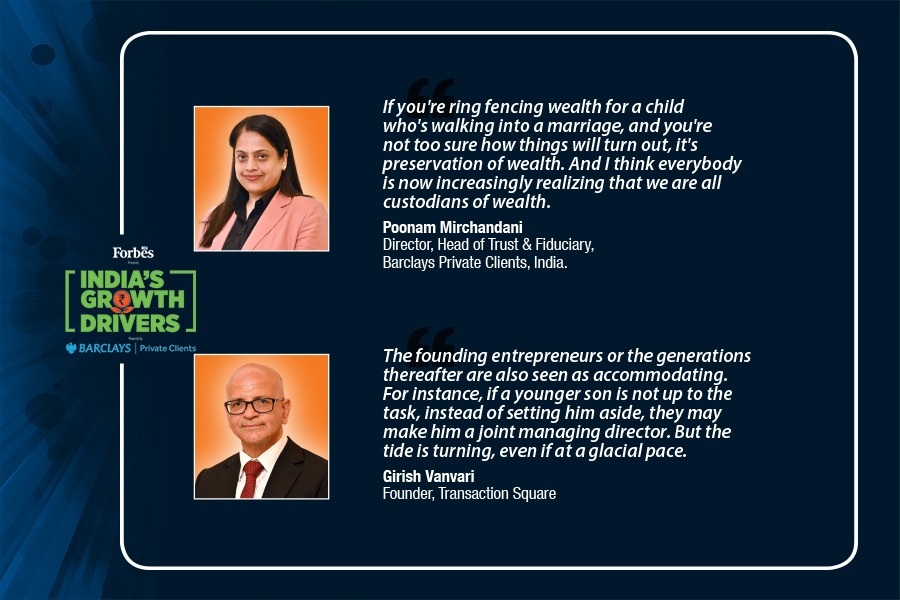 Tools of the trade: private trusts and wills
It is here that companies have started looking at private trusts and wills. “The reason why trusts are in vogue and have been very popular in the west and now in the east, and in our country as well, is because you can actually transfer assets and control during your lifetime, and then choose how much of control you want to retain, how much of control you want to give, divide between economic rights and control,” said Mr Khaitan. But at the same time such structures are of no use if not executed.

Cost, too, is a deterrent according to the panellists. For instance, a lot of the wealth of the promoters may be locked into real estate. “While transitioning real estate into a trust will always have stamp duty nuances these can be addressed by using a more strategic approach”, said Ms Mirchandani.

But one look at successful organisations that have lasted over 200 years should tell us that succession planning was among the main reasons for their endurance. Such succession needs to be bifurcated into “board-level and shareholder-level”, said Mr Khaitan. The former is more about having a say in who the next managing director should be and the latter is all about management control and voting rights.

Whereas disputes will continue to crop up especially while running a multimillion dollar business with multiple family members, said Ms Bakhru, it is important to have a forum to air these differences. “And a Governance Charter allows you to do that. So all the more reason you need to build trust, you need to have communication. I think communication is the sweet sauce for everything in a family”, she added. It’s all the more important to start this process now because the next generation, said Ms Bakhru, is more demanding.

“They have gone abroad, they've studied, they've come back, they're coming into the business, they're demanding more clarity, they want a little more freedom in terms of what they want to do if they're going to be part of the family business. And I think this is the right time for businesses in India to set up this framework, because once disputes arise and family members don’t have an internal framework to resolve differences, they will go legal and then the horse has bolted. It’s difficult to change things then”.

While the overall framework should be put in place, it should not be cast in stone, said Mr Tucker. There should be room for improvisation and changes. It should be continuously revisited. Families may move to different countries and priorities may change.

Instead of approaching succession planning with trepidation, Mr Vanvari encouraged that it should be looked at from the point of view of “good governance”. Such a framework will only lead to higher valuations because investors are more keen to work with businesses that have a semblance of continuity.

Ms Mirchandani agreed that the process is a means to protect wealth. “If you're ring fencing wealth for a child who's walking into a marriage, and you're not too sure how things will turn out, it's preservation of wealth. And I think everybody is now increasingly realizing that we are all custodians of wealth. Set up the next generation in such a way with structures, whether it's through wills or trusts that they're also protected.”

All panellists acknowledged that succession planning is the need of the hour. Successful organisations put the concept on auto-pilot by harnessing available tools such as trusts and wills to determine management control. It will be only a matter of time when succession planning, like in the West, will not just be an option but an essential checklist in the business continuity planning playbook.The pages slugged ‘Brand Connect’ are equivalent to advertisements and are not written and produced by Forbes India journalists.

Tweets by @forbesindia
Inside the not-so-quiet hustle, quit and fire culture
Brace for disappointment: CIA chief says his life is nothing like Jason Bourne and James Bond