From providing material on entrepreneurship to funding entrepreneurs, Lisa Heydlauff's journey in India has been anything but dull 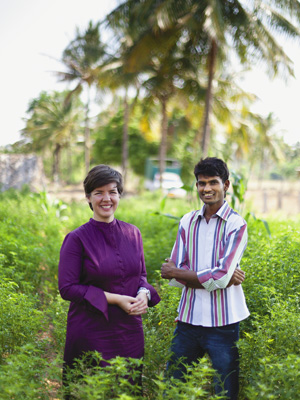 Image: Jyothy Karat for Forbes India
GREENER PASTURES Lisa Heydlauff ,founder and CEO of Be!Fund, with Radhakrishna, a young entrepreneur from Kolar district,Karnataka, who got funds from Be! Fund to set up a business

Mary Poppins and Lisa Heydlauff have something in common: They both strive to bring joy into the lives of children. Thirteen years ago, Heydlauff set out on a trip to India to answer her student’s question in Britain, ‘what is it like to go to school in India?’ Today, that question is the founding name for her work in India, Going to School, an NGO that brings out material on going to school in India in the form of a book, movie, and multimedia projects.

During her discourses in the past 13 years, two things struck Heydlauff. One, children in government schools lacked material to foster any entrepreneurial spirit; two, they desperately lacked role models to look up to. While Going to School tackles the first problem—they have a book on entrepreneurship that is sent to government schools—the second issue still exists.

With this issue on her mind, Heydlauff’s journey took a surprising turn about a year ago. From the NGO she built, she soon found herself turning into an entrepreneur to fund other entrepreneurs and stumbled onto a hybrid model of funding that mixes the roles of a venture capitalist (VC) and a banker.

She knew there was only one way to inspire youngsters from rural areas: Sell them a story—Bollywood style—that they would love to become. But unfortunately she did not have any entrepreneurial stories in hand. To fix the problem, she created the Be! Fund. “There are 200 million youngsters out there, and since they are considered high risk by banks and VCs, they do not receive funding,” she says.

“The idea is to use money that people would normally give away to charities,” says Heydlauff, “and in turn fund entrepreneurs, who would pay us back only once they made profits from the business.” It would run as a non-profit, where the money that entrepreneurs pay back as a loan with an interest of 12 percent, would go back to the fund.

However, not many people were receptive to Heydlauff’s idea and she received many rejections over a three-year period. Finally, in 2011, Phaneesh Murthy, President & CEO, iGate-Patni, recommended that she run a pilot programme, and if it succeeded, more people would get interested. “If even two entrepreneurs are successful through this funding, this fund has achieved its objective,” says Vineet Rai, founder & CEO, Aavishkaar, a micro-venture capital fund.

Today, 11 entrepreneurs have been funded through Be! Fund. In December, last year, she ran a project called Be! Movies, which was run as a corporate social responsibility initiative of Star on Star Utsav, which featured the stories of the entrepreneurs.

One such success story is Radhakrishna, 26, who wanted to help farmers in his village in Kolar district, Karnataka, sell their produce directly in the market without middlemen. His village has 250 households employed in agriculture. However, due to lack of transportation, the farmers could only go to the market twice or thrice a month. This resulted in wastage of crops and the farmers getting exploited by middlemen. Radhakrishna decided to buy a truck, learn driving and take the produce to the market. His received Rs 3 lakh in funding from Be! Fund for his idea. Today, he has already made a profit and has started paying back his loan.

Another similar story is of Sharada, 20, who received funding of Rs 1,95,000 a month ago to set up a local sanitary napkin making unit in rural Tamil Nadu. Heydlauff estimates an exit period between one and three years for each investment.

She is delighted with the initial success, but is stringent about who is funded. Of the pilot run only in Bangalore in July 2011, they received 440 calls, and took 21 people through interviews resulting in six people going through to the second round. She says, “We ask them simple things like they come and meet us with their business plan. This automatically weeds out people who are not serious.”

She hopes to reach out to more people in rural areas in the coming years. More importantly, Heydlauff wants youngsters in rural India to get inspired by stories of people like them.

Tweets by @forbes_india
All For One? : European Policy Coordination In The Eurozone Crisis And Beyond
How Kids Are Beating the Heat