Modern life is about miniaturisation. The stampede of dollars, pounds and pennies in and out of India has happened through an idyllic patch of land called Mauritius, which is about 1,865 sq. km. But the same activity is now happening at a faster pace through a smaller speck of land called Singapore, which is only 687 sq. km.

Singapore signed the Comprehensive Economic Cooperation Treaty (CECT) with India in 2005. Till then only 1,644 Indian companies had registered in Singapore. Four years later, 2,205 additional Indian companies have registered in Singapore and the numbers keep climbing.
According to RBI statistics, over the last four years, Singapore has become the country’s most attractive destination for investments and also the second largest source of foreign direct investments into India. To be fair, Mauritius continues to lead when it comes to total investments into India between 2000 and 2009, but in terms of percentage growth in investment inflows, the picture is rapidly changing. Mauritius’ investments into India grew by 271 percent between 2005-06 and 2008-09; investments from Singapore catapulted 1,077 percent over the same period.
How did this happen? It was a combination of two themes. The first theme was a desire of the Indian government to move away from the Mauritius type of treaty because of the absence of any clauses that would allow for the ‘limitation of benefits’ (LOB) on account of which Mauritius began being used to “round-trip” money — a misuse of the double taxation avoidance treaty to avoid paying taxes by routing investments through Mauritius. Lawyers call this ‘frau legis’ or the abuse of law concept.
The second theme was signing the CECT. “It does appear that one of the compulsions before the government was to work out a treaty with a country that had excellent legal systems so tax benefits would not be misused as in the case of Mauritius,” says Advait Sethna, partner, Shetty Sethna & Associates, an Indian law firm specialising in constitutional and tax laws.

As it turned out, Singapore offered a great opportunity for the rest of the world. Singapore currently has 58 double taxation agreements (DTAs) with other countries, including large players like China, Malaysia, Indonesia, the Philippines and Australia. All 58 are comprehensive tax treaties. Singapore also has seven limited treaties and is on the verge of signing on four more. It has 34 inter-government agreements that offer investment protection and facilitation, and it has 13 free trade agreements (FTAs), covering 24 countries, with eight more under negotiation.

Some companies may try to choose Singapore merely because of its tax exemption status, or as a conduit to route investment flows into, and out of, India. But that will not be as easy or convenient as in the case of Mauritius because of LOB clauses both India and Singapore have agreed upon.

Moreover, with new amendments in the India-Mauritius treaty which could include similar LOBs, the conduit strategy might get a bit difficult. It is well known that Singapore and Hong Kong are two big international financial centres in the east. And scores of hedge funds, private equity funds and institutional investors have begun getting money into the country through Singapore. 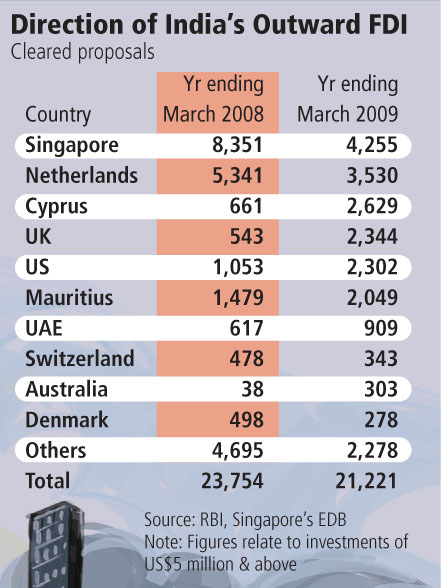 A more interesting development is how Singapore has had Indian companies choosing it as an investment destination because it provides them easy access to other countries, particularly the ASEAN economies and China.
For instance, TCS admits that Singapore is its fastest growing Asian centre, growing 40 percent year on year for the past three years, with last year accounting for a growth of 80 percent. The Tata group has a steel manufacturing unit there) and Shreya Shipping’s parent, Transworld Corporation, now has a major hub in Singapore.
Gati, a logistics company, set up its operations in Singapore in June 2008. Its managing director, Mahendra Agarwal, went on record stating, “Singapore is the best place in Asia-Pacific for an Indian company looking to expand outwards.”
Now even education institutes have followed suit. The Central Board of Secondary Education (CBSE) has affiliated schools there. So does the management school, SP Jain Institute of Management. The IITs and at least two of the IIMs are waiting (since 2005) for a go-ahead from the government for setting up campuses there. This will allow them the twin benefits of (i) being able to recruit international staff at international wages, and then use them on a rotational basis for their campuses in India, and (ii) permit existing faculty recruited in India to get the opportunity of being exposed to overseas campuses from where they could get consultancies.
But Singapore’s officials believe that real growth could come from two other sectors. “We think that the bio-tech and pharma sectors will do extremely well — given the track record Indian entrepreneurs have, and their need for a legal and credible infrastructure to introduce more breakthroughs for the entire world,” says Hock Seng Chin, Consul General of the Consulate General of the Republic of Singapore in Mumbai. This includes areas like life-sciences, food-processing and molecular biology.
Some of the companies that are already involved in active research in Singapore are Cell Research Corp and CordLife (both into stem cell research), GlaxoSmithKline (neurodegenerative diseases), Lilly (cancer and diabetes, biomarkers) and Takeda (target validation and pharmacology), among a host of others.