Touchscreens: The Midas Touch for Technology

Touchscreen technology is helping Apple snatch a greater share of the smartphone market. It is also altering the way devices and applications are designed 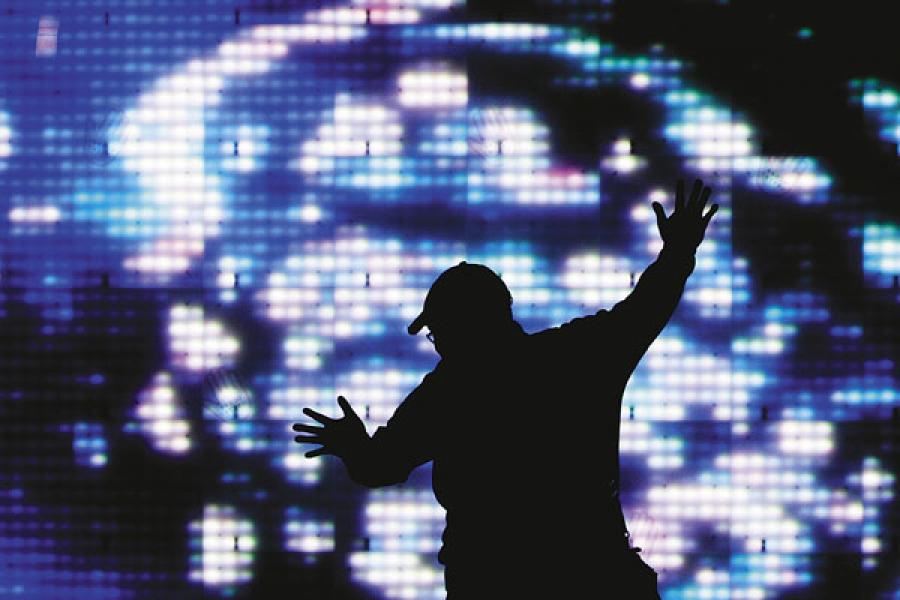 Once upon a time the microprocessor used to be the centre of the computing universe. Consumers reserved the largest chunk of their PC budgets to buy the fastest chips. But in today’s most popular computing device — the mobile phone — the processor has become a commodity component, lacking both consumer awareness and pricing power.

And taking up its throne is a flashy couple that is increasingly the centrepiece of all smartphone parties — the display and touchscreen. According to Gartner, 362 million touchscreen mobile devices will be sold this year, up nearly 97 percent from last year’s figure of 184 million. And by 2013, close to 60 percent of all mobile devices  will sport a touchscreen.
iTouch, iSee, iFeel
Technology behemoths like Microsoft and Nokia that failed to gauge the speed of touchscreen adoption are today paying the price in the form of lost market share. Windows Mobile OS had a 2009 market share of 8.7 percent, down from 11.8 percent the year before. While Nokia’s roughly 40 percent share of the smartphone market seems high, it has been falling from a peak of 50 percent since 2007. In the smartphone-heavy US market, Nokia’s market share is in single digits.
The company that has eaten both Microsoft’s and Nokia’s lunch, is Apple. It realised that the mobile phone was becoming the default gateway for people to experience content — games, movies and the Internet itself. But existing phones with their small screens, cramped keypads and legacy operating systems (OSes) were doing a poor job on this count.
Launched in 2007, the Apple iPhone solved these problems by combining a large, high-resolution glass touchscreen with a button-less user interface.
Of all the parts that make up the iPhone, the touchscreen is the most expensive — around 20 percent of the phone’s manufacturing cost. The phone’s processor meanwhile costs just between 5 and 8 percent. With its latest product, the iPad tablet computer, Apple is betting even more money on touch — the iPad’s touchscreen costs 37 percent of its entire manufacturing cost. 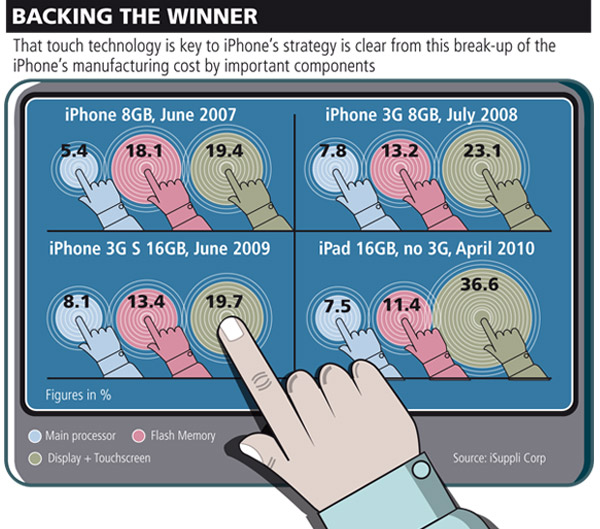 Infographic: Malay Karmakar, Hemal Seth
Today, the iPhone constitutes nearly 15 percent of the worldwide smartphone market, up from zero in 2007. While competitors like Google’s Android and BlackBerry now offer compelling touchscreen devices, they are still at best excellent followers of Apple’s strategy, not leaders yet. “Apple introduced the element of emotion into user interfaces,” says Vandana Abraham, the head of user experience design for mobile media company July Systems. She says the iPhone OS did this by mimicking the way humans work in the real world — sliding a switch, flicking through pages, allowing objects to be held or manipulated in a tangible manner. “People today acknowledge the iPhone’s as the way of using a mobile phone,” says C.K. Lu, a Gartner analyst who tracks the mobile touchscreen market.
Touch to Consume
It’s not just consumers who love touchscreen devices. Developers love them because they greatly simplify the user experience for end users, in turn leading to more time and dollars spent by them.
“Traditional mobile interfaces expected users to first navigate across a page to understand the way its information was structured and then choose their action. Important actions had to be presented within three clicks, lest the user lose interest,” says Abraham.
Modern touchscreen devices do away with such constraints — you can flick through a book, swipe through a list of pages, pinch to zoom into images, and press to activate buttons. By using real world metaphors like these, touch interfaces bring the physicality of interaction to the fore, says Abraham. This makes technology simpler and easier to relate to for end users. “Even kids and older people can use it,” says Lu. July Systems analysed the usage data for one of its most popular sports apps, created for one of the leading US television networks. Across a user base of between 5 and 6 million users, it found that vis-à-vis non-touch smartphone users, touchscreen users came back for repeat visits 3.3 times more often and viewed 4.2 times more pages. On the Internet too, touchscreen users stand out. iPhone and Android users together account for roughly 75 percent of all global mobile Internet traffic even though they make up just over 18 percent of all smartphones.
Of course, not all of this stickiness is attributable to the touchscreen alone, but it is a major factor in removing usability barriers between consumers and content. Publishers and software developers naturally see this as an opportunity. There are around 185,000 third-party apps for the iPhone and 38,000 for the Android. On the Internet, publishers are scrambling to create versions of their Web sites optimised for touchscreen devices (lighter pages that load faster, lesser text, navigation designed for fingers rather than buttons).
Touch Me Not!
With consumer computing re-orienting itself so rapidly around touchscreens, the stakes are becoming higher, and with it comes the next battleground — the courtroom! The first shots have been fired by Apple — the earliest to sense the touch opportunity, the one with the largest touch market share, and the one with most to gain or lose.
In December 2009 it sued Nokia (which had sued it a few months earlier) for infringing upon its iPhone user interface patents. Then in early March this year it sued Taiwan-based phone manufacturer HTC, alleging an infringement of 20 of its patents related mostly to touch user interfaces, including touch-based scrolling and multi-touch gestures like pinching and zooming. Most of HTC’s phones are touchscreen ones, and many run Google’s Android operating system, the closest touch challenger to Apple.
But in April last year, Apple itself was sued by Taiwanese chipmaker Elan Microelectonics which said it held the patents around multi-touch user interfaces.
“Competitors should create their own original technology, not steal ours,” said Apple CEO Steve Jobs. He probably should’ve thought of that before inventing swiping and pinching in the first place.