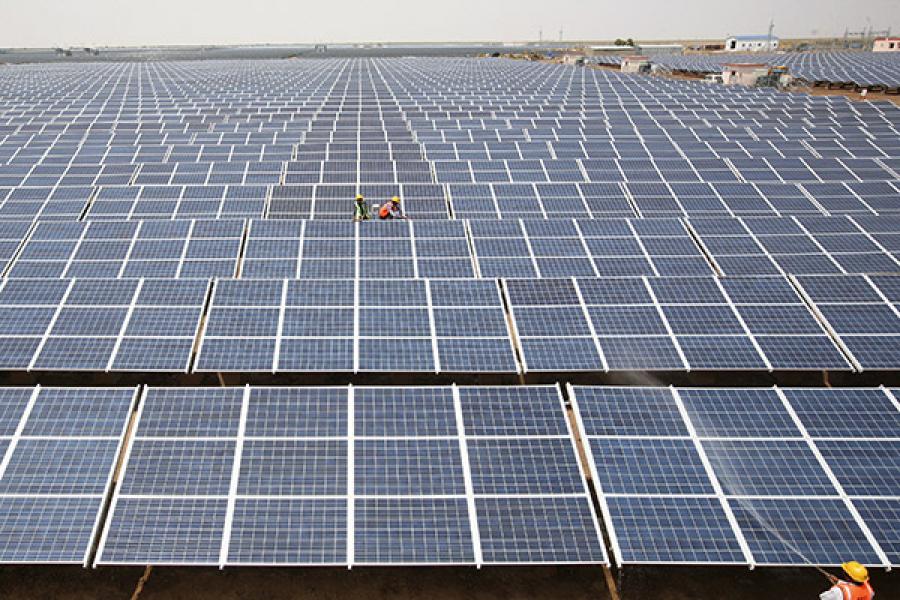 Finance Minister Arun Jaitley re-stated the government’s ambitious green energy targets without much detail on the implementation and financing of the solar, wind, biomass and hydro energy projects.

“The Ministry of New Renewable Energy has revised its target of renewable energy capacity to 1,75,000 MW till 2022, comprising 100,000 MW Solar, 60,000 MW Wind, 10,000 MW Biomass and 5000 MW Small Hydro,” said Jaitley. However, these targets had already been announced in the past few months and the budget has been met with a lukewarm response from the renewable energy industry.

In the solar energy space, for example, the government is keen to attract private sector investment but financing, land acquisition, policy instability and grid efficiency continue to hold back installation of capacity and generation of power. The budget did not incentivize investment or manufacturing in the solar sector other than an excise duty cut on round copper wire and tin alloys for use in the manufacture of Solar PV ribbon (used in solar PV cells), subject to certification by Department of Electronics and Information Technology.

Anmol Jaggi Director, Gensol Consultants, says “The excise cut on copper wire & tin alloy for solar PV cell manufacturing is again a good move but the impact on project cost is not even 0.5%.”

India is today a 1,000 MW per year solar market; the government wants to increase this 100 times in the next 7 years.

“Unlike rail and roads, tax free bonds have not been specifically proposed for renewable energy,” says Anish De, Partner – Infrastructure and Government services, KPMG in India, “Given this, any funds from tax free bonds will now have to come out of the general pool of infrastructure bonds.”

The Finance Minister today proposed to increase the Clean Energy Cess from Rs 100 to Rs 200 per metric tonne of coal, etc. to finance clean environment initiatives.

“The proposals for the utilization of funds from the increased coal cess are yet to be spelt out,” says De, “It would have been better to propose specific allocations and measures for renewable energy, especially on availability of low cost funds for the renewable energy sector.”

“Another big expectation from the budget was reduction in the MAT (Minimum Applicable Tax),” says Jaggi, “However it hasn't been changed & Renewable Energy Companies shall continue to pay 18% MAT even though there are said to be exempted from Income Tax.”

Prime Minister Narendra Modi, a keen proponent of solar energy in his home state of Gujarat, has been proactive on the renewable energy front and there is tremendous optimism from the private sector. It’s up to the government to walk the walk