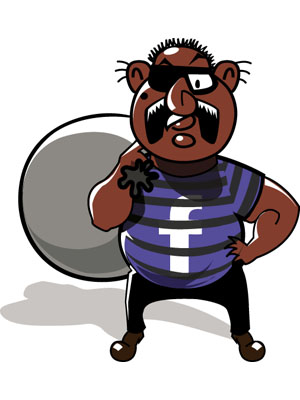 Twins Tyler and Cameron Winklevoss and Divya Narendra, fellow students of Facebook founder Mark Zuckerberg at Harvard, reportedly won $65 million from the social networking service in 2009. Their claim: The idea for Facebook was theirs, and Zuckerberg stole it. Other Web startups have alleged that Facebook simply steals their best ideas once they’ve been proven in the wild.

A Little Bird Told Us…
Twitter, with its emphasis on 140-character brevity, is the perfect zeitgeist, combining two of the biggest Internet trends: Short attention spans and constant sharing of ideas and thoughts. It’s also the place Facebook’s new features seem to be inspired from most often.

In March 2009, as part of massive redesign of its homepage, Facebook put the question “What’s on your mind?” bang on top of all user homepages. The subtle pressure to update one’s status frequently was a great way to keep people connected, but one that Twitter had been doing since 2006 with the question “What are you doing right now?”

In October 2009, Facebook introduced a stripped-down version, of its site, Facebook Lite, which many felt was imitating the simplicity and directness of Twitter. Facebook Lite was closed down in April this year and replaced with Facebook Zero, a lightweight mobile site for emerging countries.

In September 2009, Facebook allowed users to use the “@” tag to link to their friends or favourite pages in their status messages or posts. @-tagging users was again a Twitter feature.

What Friends Are For
Though Facebook ended up buying Friendfeed in August 2009, it was after it had copied the site’s approach towards creating a real-time stream of updates from various places — friends, news Web sites, brands, videos and photos — and allowing users to comment on individual items.

Check This Out
Foursquare allows users to “check-in” to various places they visit — offices, restaurants, stores, cafes — and get tips and discounts in the process. “Facebook Places”, launched in August this year, successfully co-opted the location-based status updates trend started by companies like Foursquare and Gowalla.

Bargaining Skills
Web sites like Groupon, that allow their users to access massive discounts by buying collectively, have been one of the hottest Internet trends this year. In early November, when Facebook announced “Facebook Deals”, many felt a cold wave coming. Deals would allow Facebook users to get discounts on various products and services simply by checking in through Places. Its 500-million-plus user base is not something any focussed rival can ever hope to match.

Ask Me No Questions
In July Facebook introduced a new service in beta, “Facebook Questions”, that allows users to ask questions to the entire Facebook user base and get specific, human responses. Many believe the new feature to be a copy, albeit a poorer one, of Quora, a much-talked about Q&A Web site that was started by good friends of Mark Zuckerberg’s from Harvard (and former Facebook employees).

Tweets by @forbesindia
American Dosa
Money Matters Around The World