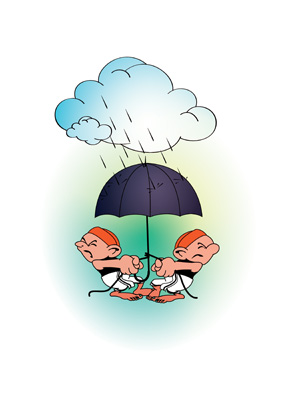 Cherrapunji This Meghalayan village is the name many of us associate with rain in India, thanks to our school books. Cherrapunji, once the wettest place on earth, has since fallen victim to climate change. Although the weathermen in Cherrapunji grieve the loss, it still receives inordinate amounts of rain — 11,777 mm a year on an average — making it the second rainiest spot on earth. The village, however, has acute water shortage for four months a year.
Mawsynram
Just 15 km from Cherrapunji is a close contender for the wet seat. Currently, the world's official wettest place, Mawsynram has dethroned Cherrapunji many times. But the lack of a proper measuring system makes experts sceptical about Mawsynram’s claim. In 2003, a peon was given the job of recording rainfall. He fudged figures and no one knew if he dozed off, or fell sick. The average rainfall in this village is 11,872 mm. 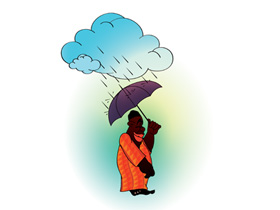 A village on the Cameroonian coast, it has sneaked up and made  it to the top five wettest places, with an annual average rainfall of 10,299 mm. It is at the foot of the south-western slope of Mount Cameroon, facing the south Atlantic Ocean. There is ‘orographic cloud build-up’ and ‘adiabatic rising of warm, moisture laden airmass’ resulting in ‘high precipitation and anti-anhyetism’. In English that means it rains a hell of a lot out there! 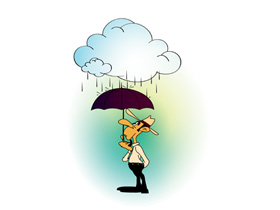 As the competition rages, it seems to many that this town in Colombia has supplanted the Indian title-bearers to become the wettest spot in the world. It has the highest average annual precipitation. Whether or not it is wetter than the other claimants remains unclear. What is sure though is that if you ever end up travelling through the western region of Colombia, through the village of Lloró, carry an umbrella or five. 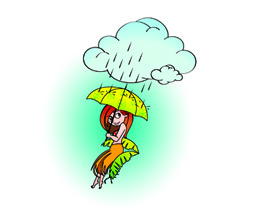 It may be surprising that one of the wettest spots is a volcano. But this one has been extinct for years and now, instead of lava, it has waterfalls flowing down its sides. Hawaii's Mount Waialeale has been promoted by its tourism industry as the rainiest point. But the Guinness Book of World Records says it is third — with an annual average rainfall of 11,430 mm — after Mawsynram and Cherrapunji. Wet, but not wet enough.