The confusion over the new computation methodology is easing. In fact, it is now seen as a more robust method to measure economic growth 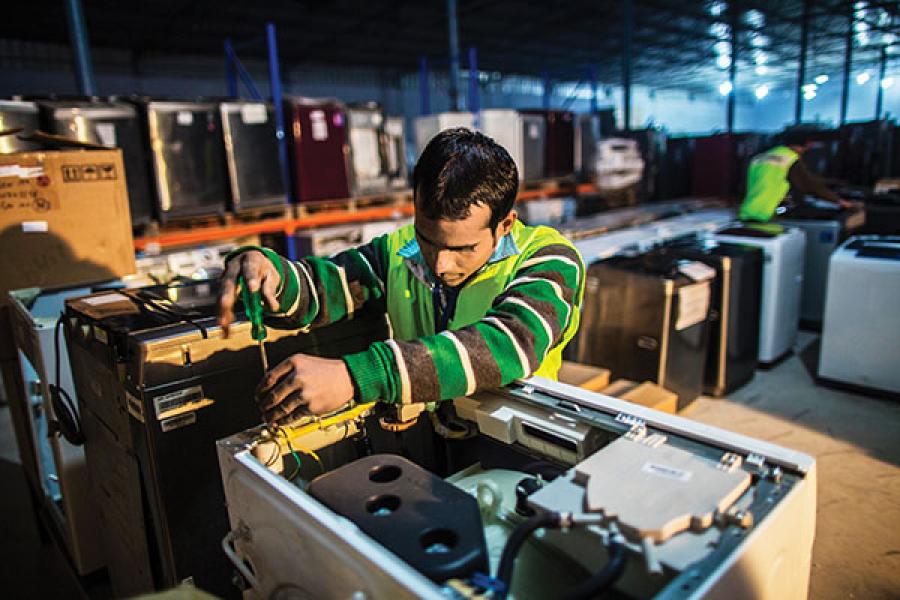 Image: Getty Images
Under the new method of calculating GDP growth, the manufacturing sector has grown by 6.8 percent

Whenever India outdoes China, euphoria follows. Indians like their country to be favourably compared with their far bigger and faster-developing neighbour. So it should have been strange when there was no palpable jubilation on February 9 when the Central Statistics Office (CSO) said India’s economy grew faster than that of China during the October-December quarter of fiscal year 2014-15: India’s GDP (gross domestic product) growth was 7.5 percent compared to China’s 7.3 percent. But the lack of euphoria wasn’t all that strange: These numbers came within days of CSO revising the 2013-14 GDP growth from 4.7 percent to 6.9 percent after it changed the methodology and the base year from 2004-05 to 2011-12.

Sceptics, And Their Reasons
Hence, far from the excitement that follows such announcements, there was so much bewilderment that the government, after a brief attempt to take credit for the achievement, quickly held back. “I am puzzled by the new GDP numbers,” said Arvind Subramanian, government’s chief economic advisor, to reporters soon after. The Reserve Bank of India (RBI) too was stumped. “It is hard to see the economy as rollicking in 2013-14,” said Raghuram Rajan, RBI governor. “The strength of China’s economy is often disputed. Now it is India’s turn to have its numbers questioned,” wrote The Economist.

“The new growth rate was a bit of a shock as it was out of sync with the situation on the ground and in variance with the tools we commonly use to measure GDP,” says Dharmakirti Joshi, chief economist at Crisil. “It is like telling the driver of a car running at 55 kmph that his speedometer was faulty and his actual speed is 75 kmph.”

The new far higher growth rate came at a time when the Index of Industrial Production (IIP) was a low 1.7 percent (in December 2014) and stood at just 2.1 percent for the first nine months of the fiscal. Credit offtake, at 10.7 percent (as of January 23, 2015), was lower than 14.4 percent during the same period last year. Exports, in dollar terms, were 11 percent lower as of January. Imports have declined, by 11.39 percent. Core inflation, too, continued to decline. A 7.5 percent growth would have, on the contrary, fuelled inflationary pressure.

Experts Stick To Their Guns
But statistical experts refuse to accept that the new method of estimating GDP growth is flawed. Re-basing, they say, is routinely done as the economy’s structure changes, especially in a developing economy. “The new method is more robust and widespread as CSO today has access to data that was not available earlier,” says Pronab Sen, former chief statistician of India. According to him, earlier, CSO worked with a database of 2,500 companies to calculate the value addition in manufacturing and extrapolated that data on the basis of paid-up capital of companies in operation. “Today CSO has access to the full balance sheet and profit & loss accounts of over 5 lakh companies and this helps to arrive at a finer computation of manufacturing value-add in the economy.” The new method uses sales tax and service tax data, which better capture quality change in the economy. The method is also in line with what global governments practice.

Sen does not see any disconnect with ground reality. “IIP measures physical output and so do exports and imports figures. Under the new calculation, the size of the GDP has actually shrunk a little and this is in line with low IIP and falling exports/imports,” he says.

Crisil’s Joshi points out that “the growth has come in through efficiency in the manufacturing space”. In the absence of revenue growth, he says, companies have generated more output with the same or less input. “This has shown a higher value-add in the economy.”

“That also explains why credit offtake has not really improved as it is a factor of inputs,” adds Sen. Their reasoning is that the corporate sector on the back of poor demand has worked hard, innovated and cut costs. This boosted manufacturing growth under the new GDP numbers: The sector grew by 6.8 percent, thus boosting the overall GDP growth rate.

Growing Acceptance
In the weeks after the announcement of the new GDP methodology, the confusion has begun to ease. The chief statistical officer met RBI officials to explain the new computation (the central bank, for now, is sticking to the old method). Economists, too, have come to accept the new norms.

Does this mean, in sum, that India is in for a faster pace of growth? Not necessarily, says Joshi. “The recent increase has come in from higher efficiency and not volume growth in the economy. This is not sustainable in the long run. It is like a company boosting profits by cutting costs instead of improving sales. There is a limit.” The growth can be sustained only if there is more investments, thus making output rise. That appears to be a tall order considering that gross fixed capital formation (fresh investments in the economy) has declined to 30.1 percent of the GDP in the second quarter of 2014-15 compared to 34.7 percent in first quarter of 2011-12.

That leaves us here: While there is a better understanding of the logic behind the higher number, it gives no reason for euphoria. It is, on the contrary, a stark reminder that if investments do not pick up, India’s growth rate will falter—new computation methods, or not.