Evolving at warp speed is the only way to survive: Indian media 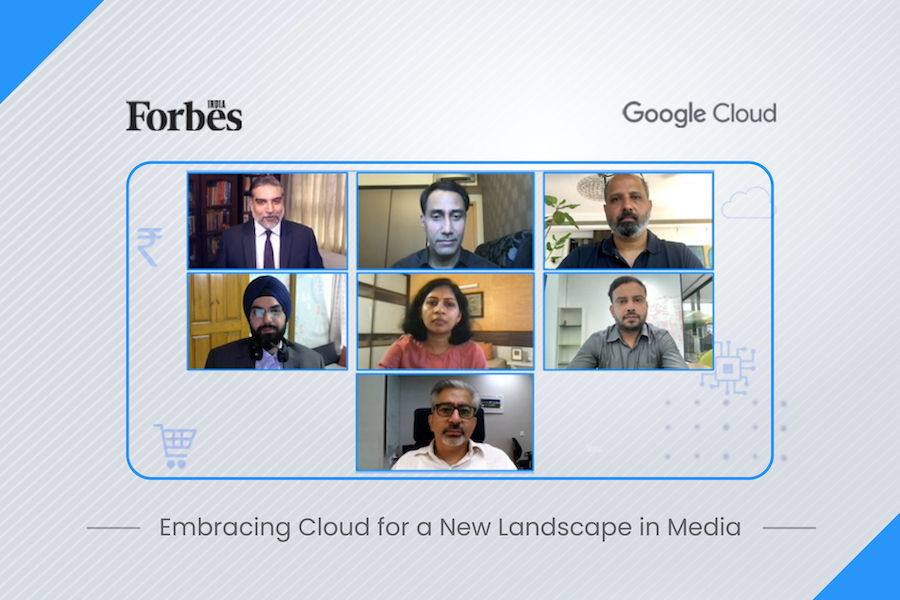 With the explosion in the consumption of media in India, it has become imperative for companies to find their niche, and hold onto it. And as any other sector in the post-COVID-19 world, that means knowing your customer, and more importantly, realizing what the customer wants.

This was a key takeaway from the Media panel of the Forbes India Presents The Next Wave Of Cloud Innovation In Association With Google Cloud. The collective realization from all the speakers was that the pandemic-led lockdowns have upended the media industry in India, home to more than 1.4 billion people.

“Unlike some other advanced markets where digital is growing at the expense of the other mediums, we are actually seeing growth in India across mediums,” said Boston Consulting Group’s Mandeep Kohli. “Digital obviously is growing the fastest on the back of macro tailwinds like consumer preference for digitization across industries, the current penetration levels, but also because the industry is really making it a concerted effort,” the managing director and partner for the Technology, Media & Telecom (TMT) practice added. “In a country as large and disparate as India, there is clearly no one size fits all.”

That is certainly a trend observed by Google Cloud’s Sudharshan Aravamudan. “What we have been seeing is that audiences for the past few years have certainly been starting to move away from appointment-based viewing schedules to viewing content anytime, anywhere and on any surface,” the JAPAC market development leader for Telecom Media & Entertainment at the Alphabet Inc. unit said.

With mobile penetration increasing steadily and connectivity becoming more and more affordable, over-the-top or OTT content has been gnawing at mainstream media’s market share steadily, the 20-year veteran of the industry noted. And the banning of certain market-leading apps that have had eyeballs for social and short-video consumption for a long time, has led to a sort of “land grab” in this high-growth segment, Sudharshan pointed out. “And the segment forms a snackable segment for the audience as opposed to even typical OTT streaming.”

And while the traditional and mainstream media still exists, the growth rates are significantly slower and lower as compared to digital-first experiences, Sudharshan pointed out. “The pandemic really just accelerated the digital trends and made us cross-the-chasm to the experience where digital becomes first.”

With the pandemic having upended not just media consumption, but also production, Google Cloud sits at an opportune trifecta to serve the industry as it undergoes a shock transformation, opined Sudharshan.

“We are fortunate to be a cloud provider that has significant media assets, both within and outside our cloud businesses,” he said. “And that has helped us be in a position to partner with major media companies and help them transform their media businesses through this particular time.”

Perhaps no other media company in the world has experienced this better than the Ananda Bazar Patrika (ABP) Group. The Indian media conglomerate first came out with a four-page evening daily that sold at two paise and had a circulation of about 1,000 copies a day in 1922.

Almost a 100-years later, the Kolkata, West Bengal-headquartered media giant is increasingly relying on the cloud to serve its readers, and customers.

“We have so many users, especially on the news side with a lot of content and video,” observed ABP’s head of digital Karan Jaitapkar. “So production and discovery both required knowledge, especially in digital, and that's where the importance in driving towards the cloud,” he said.

And the importance of cloud, especially Google Cloud, is particularly prescient when it comes to analyzing the user, and serving the user, Jaitapkar said. Add to that the need to stay relevant in a country which can best be described as being as diverse as Europe when it comes to languages and preference, he added.

“We can convert video directly into a different language rather than have a (large) volume of editorial staff,” said Jaitapkar. “We try to automate through cloud systems, the transmission and automation of video translation, the automation of text translation, so that we can drive the EBITDA,” he added, referring to earnings before interest, tax, depreciation and amortization. “EBITDA matters for media, especially in the news provider business.”

And though the pandemic threatened to undermine India’s entertainment and media industry, home to Bollywood, the maker of the highest number of movies in the world, it has made the industry stronger.

“The monetization stream when it comes to advertising has gone through the roof purely because of user time spent in the last 18 months during the pandemic,” said Vasuta Agarwal, SVP & Managing Director, Asia Pacific, InMobi. “I would say that the advertisement- supported monetization streams have also become stronger,” she added. “The sheer amount of user time spent on mobile apps is so high now that I think for any media owner or app owner, we are looking to figure out new revenues.”

This has meant trying to increasingly monetize digital as an added revenue stream for media companies that have a growing but modest online presence relative to their traditional brick-and-mortar revenue streams, Aravamudan said.

“For all these companies, digital is really the growth vehicle while traditional has been the cash cow for them in the past,” Aravamudan said. “Now, in many parts of the world, users are actually moving away from traditional,” he added.

And though the pace of change may not be as fast in India as in developed countries, the slowing growth has brought traditional media firms under pressure, Sudharshan said. “And that puts you under pressure to find ways to satisfy your core user segments who are connected to your traditional business as well as growing on the digital side.”

Indian media has evolved at a breakneck speed, thanks to its desire to survive. Adopting global best practices will only help the industry evolve to the best-in-class standard that it deserves, the panelists agreed.