Investors, ride out the storm

With no clarity on how the next few months will pan out, investors should hunker down and take stock 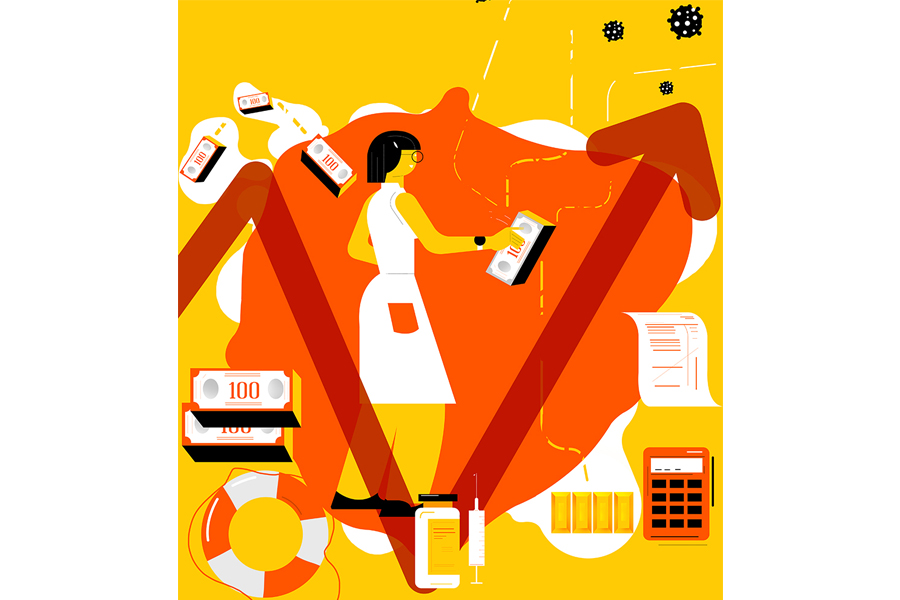 It was the last week of March. The markets had gone for a big correction—the Sensex fell by 29 percent, from 40,281 on February 25 to 28,535 a month later—and panic was at an all-time high due to the global Covid-19 crisis and the nationwide lockdown. Kotak AMC Managing Director Nilesh Shah received a call from a doctor who wanted to pull out all his money in equity and move it to the safety of fixed deposits. Shah advised him not to redeem anything and the doctor hung up. Over the next 15 days, the market bounced back 20 percent, and the doctor called Shah again. He had exited the market right at the bottom and now wanted to reinvest. Shah again advised him against it. “I am sure he must have cursed me because from there, the market went a further 10 percent up. But if you chase past performance, if you chase short-term volatility, you are going to suffer. I hoped and prayed the doctor had listened to me both the times,” says Shah. Every financial crisis involves both panic-stricken, knee-jerk reactions like the one above, as well as making the most of it by investing into the crisis. But this is the first time a medical, financial and economic crisis has hit the world together, leading to a much greater economic uncertainty not just locally but globally. As financial planners get inundated with calls from clients about their investments and reallocating assets, the advice, for now, is to sit still and do nothing if you don’t need to.

“We are telling people when there is a storm, you will have to hunker down,” says Suresh Sadagopan, founder, Ladder7 Financial Advisories. A crisis unfolding
As businesses and incomes get affected, the priority is to ensure the basics are in place—enough money for regular expenses, required annual expenses and goal-based expenses. “If that means stopping or trimming some of the investments, so be it,” says Sadagopan. The portfolio needs to be rebalanced if there is a need to build up liquidity and the emergency corpus. “Everyone needs to check where they stand, if there is a possibility of a career transition, and accumulate liquidity accordingly,” says Rohit Shah, founder and CEO of Getting You Rich. If there is a financial goal coming up, where usually one would start moving equity allocations into debt two years ahead, a more conservative approach might be required by moving it to more than two years. In fact, if the goal is not a critical one, the advice is to postpone it. “With equity portfolios doing so badly, it doesn’t make sense to withdraw right now,” adds Rohit Shah. Equity portfolios have not made money over the past three years, but experts advise against dramatic shifts from equity allocations. Two trends seem to have emerged. On the one hand, investors who have seen pay cuts and job losses and are dipping into their savings to survive; on the other, millennials and others who have had more money to save over the past couple of months because their discretionary spend has reduced. But overall, SIP contributions saw a 3 percent decline in April 2020 at ₹8,376.11 crore as compared to ₹8,641.20 crore in March 2020, and with the impact of reduced incomes yet to unfold, this may possibly fall further. Regular SIP investor Sachin Palekar (name changed) has not made any changes to his investment plan right now, but does intend moving towards being debt-free once the crisis has passed. “I am not too concerned about the market volatility since a dip is a buying opportunity. But with the uncertainty influencing everyone’s ability to generate incomes, I want to become debt-free over the next seven to eight years if possible,” he says of the home EMIs he has. “That way, even if my savings are slightly less, all my rental incomes are effectively ‘pure’ incomes,” he says. While short-term pausing of SIPs might not affect investors who are in the ‘accumulation phase’, where retirement or other goals are many years away, it might affect market sentiment. “If you don’t do SIPs for three months, it won’t affect you much, but it’s more about sentiment because whatever selling has been there [by FIIs] has been by and large absorbed by the domestic mutual funds. So if SIP flows get a little slower, it’ll have some effect on the market,” says Hemant Jani, head equity strategist, broking and distribution, Motilal Oswal Financial Services. 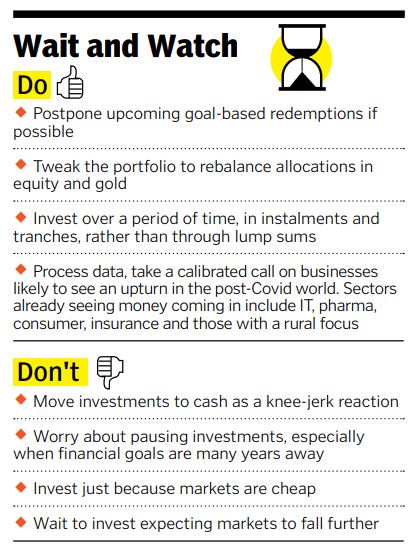 Time to invest?
If there is one piece of advice for a downturn it is that it’s a good time to buy. But experts caution against buying just because things are discounted. “Just because a new hospital has opened in my area and is giving a 40 percent discount, doesn’t mean I will get admitted, right?” says Rohit Shah. For one, the impact of the Covid-19 crisis on economies, businesses and finance is yet to be seen and will depend on various factors ranging from global fiscal stimuli to the availability of a vaccine. “The learning is still happening as we speak, because this cycle has not yet ended,” says Nilesh Shah of Kotak. “We are yet to know the cost of the coronavirus, how to identify businesses that can withstand Covid-19, and its disruption and dislocation. We also have to identify services and businesses which can be positioned for upturn. At this point, keep your eyes and ears open, collect the data and process it based on evidences, with some forecasting,” says Nilesh Shah. Experts don’t see growth returning until 2022, and while it is too early to speak about the sectors that will do well, Jani points out money is flowing into sectors like pharmaceuticals, telecom, IT, consumer, insurance and those that have a purely rural focus considering the virus has so far mainly affected cities. However, he adds, their overall representation at the index levels is too small to have a major impact on markets. “The pain you’re going to see will be far more than these sectors—even if they do well, it will not be enough to really compensate for the damage,” says Jani. The fiscal stimulus announced by the government has been disappointing, but other countries like the US, Japan and the EU have announced major stimuli and he sees the ripples of that making their way to emerging markets like India in the form of FII flows. While a portfolio should, as always, consist of real estate, equity, fixed income, commodity and offshore investments, as liquidity increases and interest rates go further down, it does make sense to increase allocations towards gold—going up to 10 percent of the portfolio—but in two-three tranches to ensure averaging. As far as equity is concerned, markets typically bottom out much before actual positive news, in this case the possibility of stability returning and/or a medical solution being found, so it is advisable to divide the investments into two parts—one to be incrementally averaged into the market by investing in instalments as we wait for a medical solution, and the other to be invested when a medical solution shows signs of emerging. “Because unless and until a medical solution emerges, the market will not make a bottom,” says Nilesh Shah.​

Tweets by @forbes_india
Ep. 16. Adithi Rao, Candida Louis: What it's like for a woman to ride through India
Guidelines for planning the return to work