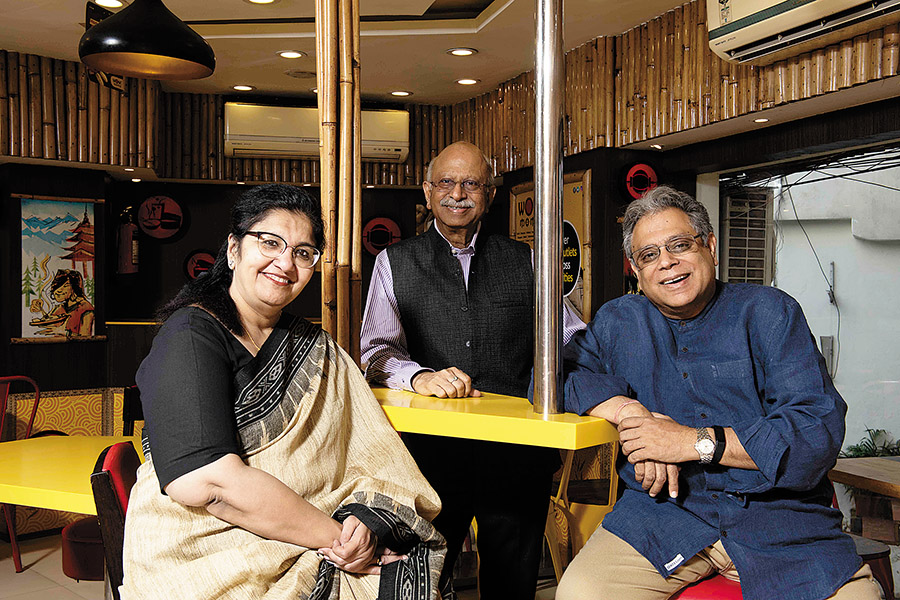 (From left) Padmaja Ruparel, Saurabh Srivastava and Raman Roy co-founded the Indian Angel Network in April 2006
Image: Amit Verma
In a sudden turn of events in Kolkata in 2013, Padmaja Ruparel tore the term sheet offered to her by Sagar Daryani, chief executive and co-founder of Wow! Momo Foods. The reaction was a result of the entrepreneur turning down a funding offer from the co-founder of Indian Angel Network (IAN) after initially expressing interest. He wanted to run his business without taking external money. “I told him, ‘Please go ahead’,” recalls Ruparel. Daryani’s intent of making it big before hunting for funds impressed her. What matters, says Ruparel, is the relationship you strike with an entrepreneur. “You have to first invest in him,” she explains.

Two years later, IAN became the first investor on board when Daryani raised ₹10 crore from India’s largest angel networking and investment platform (in terms of  scale and investment) led by Sanjeev Bikhchandani, Saurabh Srivastava and Ashvin Chadha. “Well, there’s a streak of devil in every angel,” says Ruparel. The devil, she explains, comes into the picture in terms of mitigating the risk. “When to enter [into a deal] is important, but most crucial is to know when to exit,” she says. “It’s good to be a devil because at the end of the day, the devil makes money,” says Srivastava, former chairman of Nasscom.

Last year, IAN provided 11 exits to its investors at an average multiple of 11x. Overall, it has had 34 exits since 2006 when it was founded. “We might be ‘angels’, but we need to make money,” says Srivastava, busting a widespread myth around angel investing that such a risky form of investment does not give returns. He takes a contrarian stand. “If you want to avoid risk, you can put your money in fixed deposits. The lesser the risk, the lesser is the money,” he says.

Srivastava and his team know how to make good money. Take, for instance, when Kolkata-based QSR chain Wow! Momo raised $23 million from New York-based hedge fund Tiger Global Management at a hefty valuation of $120 million (or about ₹860 crore) last year, up from its previous valuation of ₹300 crore in 2018. IAN, then, pocketed a seven-fold return.

With over 500 investors from 12 countries, IAN invested around ₹160 crore across 44 deals last year. Its total investment since inception has been over ₹500 crore and it has now set itself an ambitious target: ₹5,000 crore infusion in 500 companies over the next 10 years. Backing fledgling startups and fuelling the aspirations of entrepreneurs during the beginning of their journey have kept IAN in the business, but it has flourished because of a ‘method in the madness’ of ensuring lucrative returns to investors. Ruparel attributes the success to a relentless focus on investors. “If you take your eyes off, you will lose the game,” she says.

The failure rate has been modest: A ₹50 crore write-off in over 30 startups. “We will have failures,” says Srivastava. Success, he emphasises, only makes you arrogant. “It’s failure that makes you smarter,” he says.

IAN’s report card has attracted the attention of several VCs.

“They have done a good job,” says Vikram Gupta, founding partner at Mumbai-based IvyCap Ventures. Angel investment is a highly risky asset class. IAN, he points out, was one of the first angel networks to master the art in an organised form. “Their new fund is a natural progression to what they have been doing,” he says, but adds a word of caution. With the new VC fund, it might become operationally challenging for IAN to manage angel investment and VC rounds at the same time.

But challenges are what Srivastava and his team have battled and thrived on for over a decade. In 2006, angel funding was not an organised industry; raising starting money from ‘family and friends’ was not uncommon and the notion that anybody can become an angel was widespread. “Initially we struggled… one of our early investments took a decade to give us an exit,” says Srivastava. The struggle led to mistakes and learnings. “The biggest learning was to back an entrepreneur and their team, and not their business,” he says. No one gets seduced by the market size, excel sheet or opportunity. These might be necessary conditions for success, but not sufficient ones, he adds.

Ruparel speaks of a second learning. An angel or investor is a coach, not a captain. “You have to be like Ravi Shastri and not Virat Kohli,” she says, adding that a coach-captain relationship is something that many still don’t understand. Handholding, mentoring and standing by the entrepreneur during tough times are some of the qualities that make a good angel or investor.

Raman Roy, one of the three co-founders at IAN, agrees. “Anybody can write a cheque, but that doesn’t make them an angel,” he says. “I prefer working with entrepreneurs who are not solely driven by valuation.” Getting a billion-dollar valuation, he adds, can’t be the primary driver of business.

Serial entrepreneur Kunal Shah, who founded FreeCharge in 2010 and is now the founder of Cred, a financial services platform, explains how angels helping entrepreneurs grow advances the entire ecosystem. The first generation of successful startups, he says, helped the entire ecosystem prosper by making resources available to more entrepreneurs in the form of angel investors who have often been founders themselves. “Entrepreneurship is tough no matter how many times one has done it,” says Shah, an active angel investor who has mentored and made investments in companies such as Unacademy, RazorPay, Go-Jek, Innov8 and Zilingo. “Angel investing is how I pay forward the support I’ve been fortunate to receive,” he says.

While Shah is giving it back to the community in his own way, the team at IAN is clear that it wants to play a dual role. The angel part comes from investing and mentoring entrepreneurs who are in need of money and guidance. The devil part comes from taking care of the interests of investors who have put in precious dollars in one of the riskiest financial assets. The angels seem to be doing a fine balancing act.

● This feature was written before the Covid-19-triggered lockdown began

Tweets by @forbesindia
Will US protests spark a second coronavirus wave?
Covid-19 patients by day, a newborn by night