The protests in dozens of cities have been spurred most recently by the death last week of George Floyd at the hands of police in Minneapolis. But the unrest and outrage spilling out into the streets also reflects the dual, cumulative tensions arising from decades of killings by police and the sudden losses of family and friends from the virus 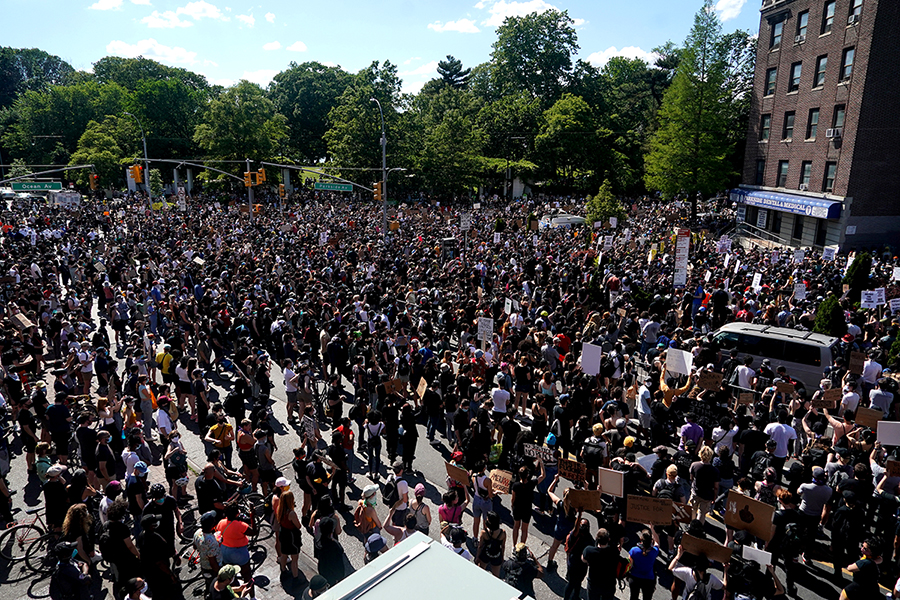 Demonstrators at a rally in New York, May 30, 2020. Across the country, mayors, public health experts and other officials worry that even though many protesters are wearing masks, the risk of new coronavirus cases will increase as thousands gather. (Chang W. Lee/The New York Times)

Mass protests against police brutality that have brought thousands of people out of their homes and onto the streets in cities across America are raising the specter of new coronavirus outbreaks, prompting political leaders, physicians and public health experts to warn that the crowds could cause a surge in cases. While many political leaders affirmed the right of protesters to express themselves, they urged the demonstrators to wear face masks and maintain social distancing, both to protect themselves and to prevent further community spread of the virus. More than 100,000 Americans have died of COVID-19, the disease caused by the new coronavirus. People of color have been particularly hard hit, with rates of hospitalizations and deaths among black Americans far exceeding those of whites. The protests in dozens of cities have been spurred most recently by the death last week of George Floyd at the hands of police in Minneapolis. But the unrest and outrage spilling out into the streets from one city to the next also reflects the dual, cumulative tensions arising from decades of killings by police and the sudden losses of family and friends from the virus. The spontaneous outpouring of protests are occurring as many states have warily begun reopening after weeks of stay-at-home orders with millions of Americans unemployed. Restaurants, schools, beaches and parks are under scrutiny as the public tentatively practices new forms of social distancing. In Los Angeles, where demonstrations led to the closing of virus testing sites Saturday, Mayor Eric Garcetti warned that the protests could become “super-spreader events,” referring to the types of gatherings, usually held in indoor settings, that can lead to an explosion of secondary infections. Gov. Larry Hogan of Maryland, a Republican, expressed concern that his state would see a spike in cases in about two weeks, which is about how long it takes for symptoms to emerge after someone is infected, while Atlanta’s mayor, Keisha Lance Bottoms, advised people who were out protesting “to go get a COVID test this week.” Some infectious disease experts were reassured by the fact that the protests were held outdoors, saying the open air settings could mitigate the risk of transmission. In addition, many of the demonstrators were wearing masks, and in some places, they appeared to be avoiding clustering too closely. “The outdoor air dilutes the virus and reduces the infectious dose that might be out there, and if there are breezes blowing, that further dilutes the virus in the air,” said Dr. William Schaffner, an infectious disease expert at Vanderbilt University. “There was literally a lot of running around, which means they’re exhaling more profoundly, but also passing each other very quickly.” The crowds tended to be on the younger side, he noted, and younger adults generally have better outcomes if they become ill, though there is a risk they could transmit the virus to relatives and household members who may be older and more susceptible. But others were more concerned about the risk posed by the marches. Dr. Howard Markel, a medical historian who studies pandemics, likened the protest crowds to the bond parades held in American cities like Philadelphia and Detroit in the midst of the 1918 influenza pandemic, which were often followed by spikes in influenza cases. “Yes, the protests are outside, but they are all really close to each other, and in those cases, being outside doesn’t protect you nearly as much,” Markel said. “Public gatherings are public gatherings — it doesn’t matter what you’re protesting or cheering. That’s one reason we’re not having large baseball games and may not have college football this fall.” Though many protesters were wearing masks, others were not. SARS-CoV-2, the virus that causes the COVID-19 disease, is mainly transmitted through respiratory droplets spread when people talk, cough or sneeze; screaming and shouting slogans during a protest can accelerate the spread, Markel said. Tear gas and pepper spray, which police have used to disperse crowds, cause people to tear up and cough, and increase respiratory secretions from the eyes, nose and mouth, further enhancing the possibility of transmission. Police efforts to move crowds through tight urban areas can result in corralling people closer together, or end up penning people into tight spaces. And emotions have been running high, Markel said. “People get lost in the moment, and they lose awareness of who is close to them, who’s not, who’s wearing a mask, who’s not,” he said. The biggest concern is the one that has bedeviled infectious disease experts since the pandemic began, and it is the coronavirus’ secret weapon: that it can be transmitted by people who do not display any symptoms and feel healthy enough to participate in protests. “There are a huge number of asymptomatic carriers, and that makes it hugely risky,” Markel said. Dr. Ashish Jha, a professor and director of the Harvard Global Health Institute, said more than half of coronavirus infections are spread by people who are asymptomatic, including some who are infected but never go on to develop symptoms and others who do not yet know they are sick. Arresting, transporting or jailing protesters increases the potential for spreading the virus. Jha called on protesters to refrain from violence, and urged police to exercise restraint. Dr. Scott Gottlieb, a former commissioner of the Food and Drug Administration, appearing on CBS’ “Face The Nation” on Sunday, also predicted the protests would lead to new “chains of transmission.” He said social and economic inequities, including poor access to health care, discrimination in health care settings, greater reliance on public transportation and differences in employment were all factors leading to a greater burden of COVID-19 disease among people of color. “Stopping the pandemic is going to depend on our ability to take care of our most medically and socially vulnerable,” Gottlieb said. “We absolutely need to resolve these underlying problems to eliminate the risk of pandemic spreading of the epidemic."

Tweets by @forbesindia
What is Antifa, the movement Trump wants to declare a terror group?
IAN: When Angels wear Prada