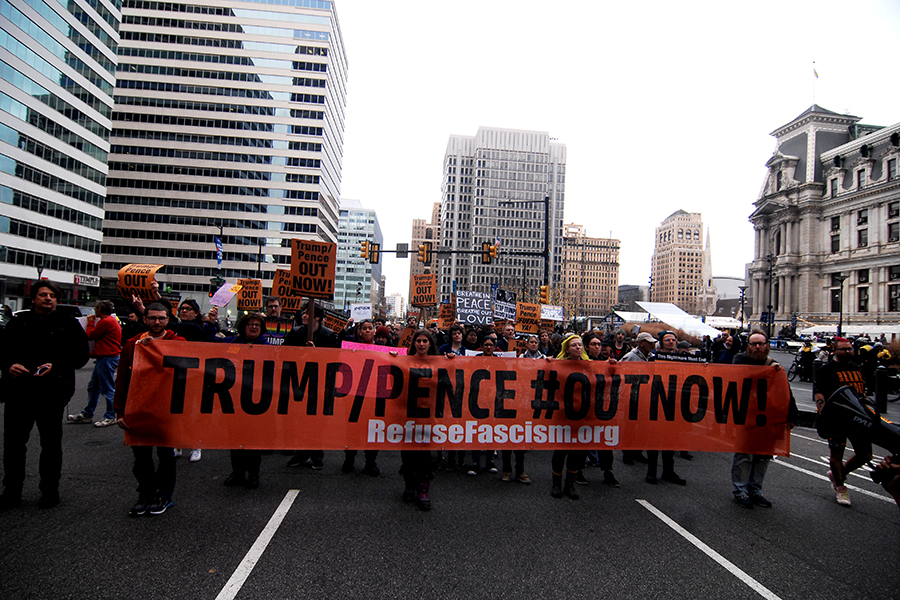 Anti Fascists rallied in front of City Hall before taking to the streets to protest the Trump Administrations new sanctions on Iran, taking the view that the sanctions are a form of economic terrorism and amount to an escalation in the push toward an open war with Iran, in Philadelphia on January 11, 2020. (Photo by Cory Clark/NurPhoto via Getty Images)

Seeking to assign blame for the protests that have convulsed cities across the country, President Donald Trump said Sunday that the United States would designate antifa, the loosely affiliated group of far-left anti-fascism activists, a terrorist organization. The president’s critics noted, however, that the United States does not have a domestic terrorism law and that antifa, a contraction of “anti-fascist,” is not an organization with a leader, a defined structure or membership roles. Rather, antifa is more of a movement of activists whose followers share a philosophy and tactics. They have made their presence known at protests around the country in recent years, including the “Unite the Right” rally in Charlottesville, Virginia, in 2017. Who are the members of antifa?
It is impossible to know how many people count themselves as members. Its followers acknowledge that the movement is secretive, has no official leaders and is organized into autonomous local cells. It is also only one in a constellation of activist movements that have come together in the past few years to oppose the far right. Antifa members campaign against actions they view as authoritarian, homophobic, racist or xenophobic. Although antifa is not affiliated with other movements on the left — and is sometimes viewed as a distraction by other organizers — its members sometimes work with other local activist networks that are rallying around the same issues, such as the Occupy movement or Black Lives Matter. What are its goals?
Supporters generally seek to stop what they see as fascist, racist and far-right groups from having a platform to promote their views, arguing that public demonstration of those ideas leads to the targeting of marginalized people, including racial minorities, women and members of the LGBTQ community. “The argument is that militant anti-fascism is inherently self-defense because of the historically documented violence that fascists pose, especially to marginalized people,” said Mark Bray, a history lecturer at Dartmouth College and the author of “Antifa: The Anti-Fascist Handbook.” Many antifa organizers also participate in more peaceful forms of community organizing, but they believe that using violence is justified because of their views that if racist or fascist groups are allowed to organize freely, “it will inevitably result in violence against marginalized communities,” said Bray, whose defense of the anti-fascist movement has incited criticism and generated support at Dartmouth. When did the movement begin?
Although the Merriam-Webster dictionary says the word “antifa” was first used in 1946 and was borrowed from a German phrase signaling opposition to Nazism, more people began joining the movement in the United States after the 2016 election of Trump to counter the threat they believed was posed by the so-called alt-right, Bray said. One of the first U.S. groups to use the name was Rose City Antifa, which says it was founded in 2007 in Portland, Oregon. It has a large following on social media, where it shares news articles and sometimes seeks to dox, or reveal the identities and personal information of, figures on the right. The antifa movement gained more visibility in 2017 after a series of events that put a spotlight on anti-fascist protesters, including the punching of a prominent alt-right member; the cancellation of an event by a right-wing writer at the University of California, Berkeley; and their confrontation of white nationalist protesters in Charlottesville who turned violent. What distinguishes antifa from other protest groups?
Bray said antifa groups often use tactics similar to anarchist groups, such as dressing in all black and wearing masks. The groups also have overlapping ideologies, as both often criticize capitalism and seek to dismantle structures of authority, including police forces. How have politicians and others reacted?
The movement has been widely criticized among the mainstream left and right. After the protests in Berkeley, California, in August 2017, U.S. House Speaker Nancy Pelosi decried “the violent actions of people calling themselves antifa” and said they should be arrested. Conservative publications and politicians routinely rail against supporters of antifa, who they say are seeking to shut down peaceful expression of conservative views. These critics point to moments when purported antifa members have been accused of sucker-punching Trump supporters. Ruth Ben-Ghiat, a professor of history at New York University who studies fascism, said she worried that antifa’s methods could feed into what she said were false equivalencies that seek to lump violence on the left with attacks by the right, such as the killing of a protester in Charlottesville by a man who had expressed white supremacist views. “Throwing a milkshake is not equivalent to killing someone, but because the people in power are allied with the right, any provocation, any dissent against right-wing violence, backfires,” Ben-Ghiat said. Between 2010 and 2016, 53% of terrorist attacks in the United States were carried out by religious extremists — 35% by right-wing extremists and 12% by left-wing or environmentalist extremists, according to a University of Maryland-led consortium that studies terrorism. Militancy on the left can “become a justification for those in power and allies on the right to crack down,” Ben-Ghiat said. “In these situations, the left, or antifa, are historically placed in impossible situations.”

Tweets by @forbes_india
Astronauts Dock with Space Station after historic SpaceX launch
Will US protests spark a second coronavirus wave?