The studies each aim to enroll 30,000 people and determine whether the vaccines are safe and effective 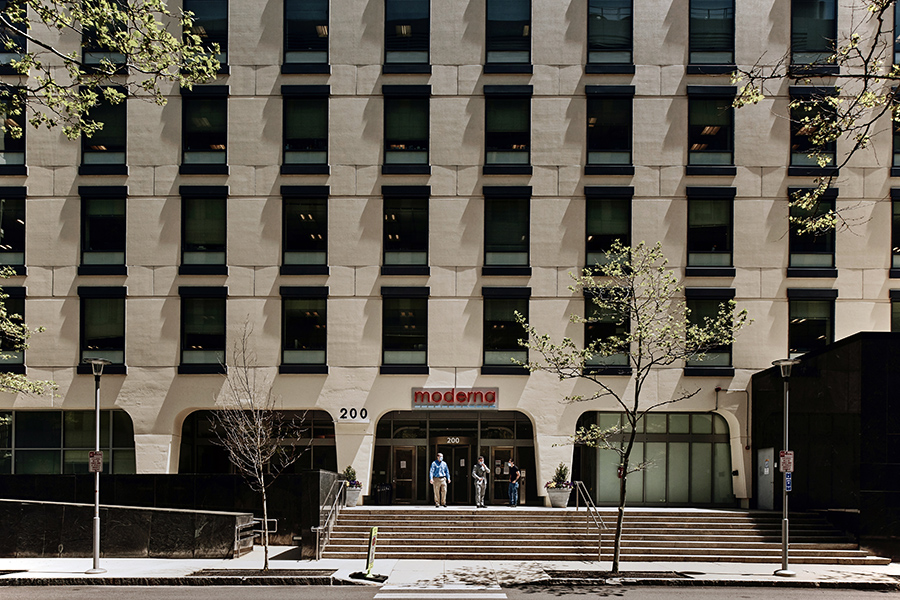 The headquarters of the biotech company Moderna in Cambridge, Mass., on May 19, 2020. The first large study of safety and effectiveness of a coronavirus vaccine in the United States began on Monday morning, July 27, 2020, according to the National Institutes of Health and Moderna, which collaborated to develop the vaccine. (Tony Luong/The New York Times)

The first large study of safety and effectiveness of a coronavirus vaccine in the United States began Monday morning, according to the National Institutes of Health and biotech company Moderna, which collaborated to develop the vaccine. A volunteer in Savannah, Georgia, received the first shot at 6:45 a.m., Dr. Anthony Fauci, director of the National Institute of Allergy and Infectious Diseases, said at a news briefing. The study, a Phase 3 clinical trial, will enroll 30,000 healthy people at about 89 sites around the country this summer. Half will receive two shots of the vaccine, 28 days apart, and half will receive two shots of a saltwater placebo. Neither the volunteers nor the medical staff giving the injections will know who will get the real vaccine. Researchers will then monitor the subjects, looking for side effects. And their main goal will be to see if significantly fewer vaccinated people contract COVID-19, to determine whether the vaccine can prevent the illness. The study will also try to find out if the vaccine can avert severe cases of COVID and death; if it can block the infection entirely, based on lab tests; and if just one shot can prevent the illness. A second company, Pfizer, announced late Monday afternoon that it had also begun a late-stage study of a coronavirus vaccine. Pfizer has been working with a German company, BioNTech. Their study will also include 30,000 people, from 39 states in the United States, and from Brazil, Argentina and Germany. The first subjects received injection at the University of Rochester on Monday. The government announced last week that it had reached a $1.95 billion deal to buy 100 million doses of Pfizer’s vaccine by the year’s end, but only if the trial proves it safe and effective. Fauci estimated that the full enrollment of 30,000 people in the Moderna trial would be completed by the end of the summer and that results might be available by November. Findings might emerge even earlier, he said, but added that he doubted it. He said that the high rates of transmission in some parts of the country, though unfortunate, would help speed up the process of determining whether the vaccine works. Dr. Mark Mulligan, the director of the NYU Langone Vaccine Center in New York, which will begin giving injections of the Pfizer vaccine Tuesday, said he thought that full enrollment would take two months, and that it would take four to six months to determine whether the vaccine worked. Overall, a total of 150 to 160 coronavirus infections in the study will be enough to determine whether the Moderna vaccine is acceptably effective — that is, if it protects 60% of those who receive it, Fauci said. Ideally, he would like the figure to be higher, but he said 60% “would be a major, huge step at controlling this outbreak; we’ll take that amount.” Dr. Francis Collins, director of the National Institutes of Health, said the U.S. government was reaching out to groups hit hardest by COVID — older people, those with chronic diseases, Blacks, Latinx and Native Americans — to encourage them to participate in the study. He said that the pandemic had put health disparities into “sharp relief” and that extra efforts were needed to gain the trust of people in those groups who might be reluctant to sign up for a medical experiment. Earlier tests of Moderna’s vaccine showed that it stimulated a strong immune response, with minor and transient side effects like sore arms, fatigue, achiness and fever. But exactly what type of immune response is needed to prevent the illness is not known, so Phase 3 studies are essential to determine whether a vaccine really works. In a statement, Collins said, “Having a safe and effective vaccine distributed by the end of 2020 is a stretch goal, but it’s the right goal for the American people.” He said that despite the unprecedented speed in bringing this experimental vaccine to human testing, “the most stringent safety measures” were being maintained. Moderna said in a statement that it would be able to deliver about 500 million doses a year and possibly up to 1 billion doses per year, starting in 2021. The Massachusetts-based company, which has received nearly $1 billion from the federal government to develop a coronavirus vaccine, has said it will not sell the vaccine at cost, but for profit. Moderna has not said what it will charge. “We will price it responsibly during the pandemic, to make sure it is broadly accessible,” a spokesman, Ray Jordan, said in an email. The company may change the price later, when the virus becomes endemic, “but that is not something we have settled at this time,” Jordan said. Moderna shares were up more than 9% Monday. Pfizer has also said it would sell its product at a profit; the contract with the government works out to about $20 a shot, and people will need two. Both the Moderna and Pfizer/BioNTech vaccines use a synthetic version of genetic material from part of the coronavirus, encased in tiny particles made of fat that help it get into human cells. The genetic material, called messenger RNA, or mRNA, then prompts the cells to churn out a tiny piece of the virus, which the immune system sees as foreign and learns to recognize. If the person is later exposed to the real virus, the immune system will attack it. Messenger RNA has not yet produced any approved vaccines, but other companies have also invested in the approach because of its potential to produce vaccine quickly. CureVac and Sanofi are also working on mRNA vaccines. At the news briefing, Collins said that three more Phase 3 trials would be starting soon, each needing 30,000 patients. Those trials will involve vaccines made by Novavax, Johnson & Johnson and a collaboration of the University of Oxford and AstraZeneca. All three companies are part of the Trump administration’s Operation Warp Speed. Pfizer is not.