Results are in for the sharing economy. They are ugly.

In earnings reports this week, Uber and Lyft disclosed the depth of the financial damage, as did Airbnb's cost slashing measures. The companies, founded on the notion that they should become as big as possible as quickly as possible and worry about making a profit somewhere down the line, now face an uncertain future

By Kate Conger and Erin Griffith 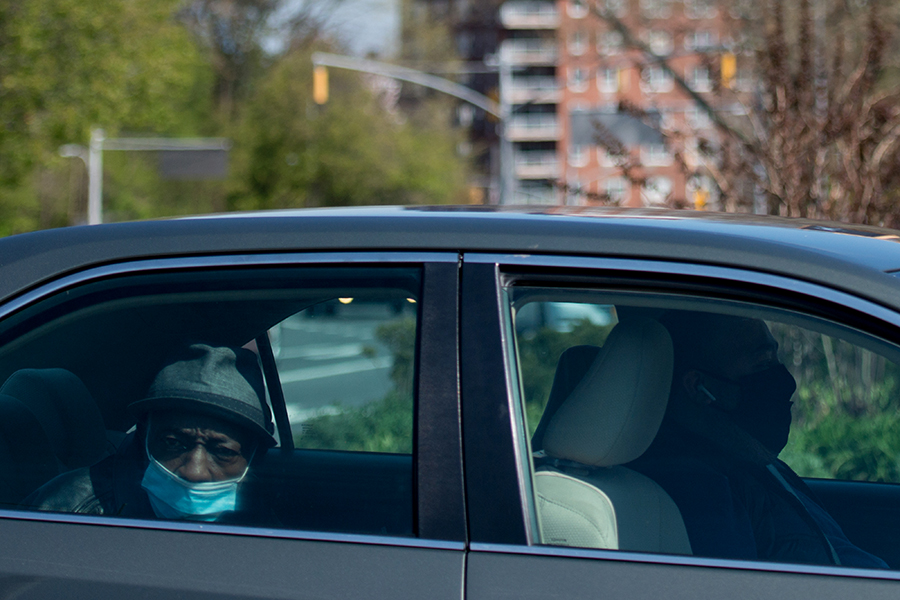 A customer wears a face mask while riding in an Uber in Brooklyn, April 25, 2020. Lyft, Uber and Airbnb depend on travel, vacations and gatherings — that’s a problem when much of the world is staying home.
Image: Andrew Seng/The New York Times

OAKLAND, Calif. — The coronavirus pandemic has gutted the so-called sharing economy. Its most valuable companies, which started the year by promising that they would soon become profitable, now say consumer demand has all but vanished.

It is not likely to return anytime soon.

In earnings reports this week, Uber and Lyft disclosed the depth of the financial damage. The companies said their ride-hailing businesses all but collapsed in March, the last month of the first quarter, as shelter-in-place orders spread through Europe and the United States.

The red ink extends beyond ride hailing. Home-sharing company Airbnb, which investors valued at $31 billion, had planned to go public this year. Instead, the company has slashed costs and raised emergency funding, and Tuesday it laid off 1,900 employees, about 25% of its staff. It also reduced its revenue forecast for this year to half of what it brought in last year.

“While we know Airbnb’s business will fully recover, the changes it will undergo are not temporary or short-lived,” Brian Chesky, Airbnb’s chief executive, wrote in a memo to employees.

The companies, founded on the notion that they should become as big as possible as quickly as possible and worry about making a profit somewhere down the line, now face an uncertain future. And their timelines for turning a profit appear — for now — to have been tossed aside.

Even when people return to the office and start traveling, the pandemic could change how they behave for years to come. Thirty percent of gig-economy revenue could disappear over the next one to two years, with a portion of it unlikely to return, said Daniel Ives, managing director of equity research at Wedbush Securities.

“Based on our analysis of the gig economy and the overall pie of consumers, unfortunately, there’s a slice that — until there’s a vaccine — will not get in a ride-sharing vehicle or use an Airbnb,” Ives said.

On Tuesday, there was another threat to Uber and Lyft: California’s attorney general sued the companies, claiming that they misclassified their drivers as independent contractors. If the lawsuit is successful, the companies could have to pay hundreds of millions of dollars in civil penalties and back wages for drivers.

Airbnb faces a different challenge. How will hosts — most of them offering rentals as a side business — deal with virus safety? In an effort to bolster confidence in its listings, the company announced a set of new cleaning standards for its rentals in April. Guests can also opt for a 72- or 24-hour vacancy period before they enter.

There is not much to look forward to in the current quarter for the companies, according to financial analysts. Ives said he expected Uber’s revenue to contract 69% and Lyft’s 66% during the period, which covers April through June.

Lyft said rides on its service fell nearly 80% in late March and remained down 75% in mid-April. In May, passengers began to return cautiously to Lyft, but rides were still down 70%, Lyft executives said on a Wednesday earnings call with financial analysts.

If passengers continued to stay away from the service at similar rates, Lyft predicted it would lose nearly $360 million on an adjusted basis, which excludes stock-based compensation and other expenses, during the current quarter. Its adjusted loss in the first quarter was $97.4 million.

“These are the hard truths we’re facing,” Logan Green, Lyft’s chief executive, said Wednesday. In late April, Lyft laid off 17% of its employees. Executives took a 30% pay cut, and employee pay was trimmed 10%.

On Thursday, Uber said revenue in the first quarter grew 14% from the same quarter last year, but the company’s losses ballooned 190% to $2.9 billion. That deficit was largely driven by a $2.1 billion loss caused by its investments in international ride-hailing businesses, like Grab and Didi, that are also experiencing low demand because of the virus.

“I won’t sugarcoat it. COVID-19 has had a dramatic impact on rides,” Dara Khosrowshahi, Uber’s chief executive, said Thursday in a call with investors. Use of Uber’s ride service was down 80% in April, he said. But Uber saw a bright spot in its food delivery, which grew 89% since the previous year, excluding India.

Although Uber has not yet given a new date by which it expects to become profitable, Khosrowshahi said the pandemic “will impact our timeline by quarters, not years.” Before the outbreak, Uber said it would be profitable, excluding some costs, by the end of this year.

Uber laid off 14% of its employees Wednesday as it cut 3,700 people from its recruiting and customer service organizations.

Khosrowshahi will not take a salary for the rest of the year. He said in an email to remaining employees, seen by The New York Times, that the company continued to look for ways to cut costs and may eliminate more jobs over the next two weeks.

While Uber Eats, the food delivery service, has experienced increased demand and restaurant sign-ups in some markets, the company also shut down Uber Eats in several international markets where it had been burning cash and laid off 50 employees from that division.

Its bike and scooter business is another weak point, and Uber invested $85 million in a competing service, Lime, that would allow it to offload its bikes and scooters while still offering Lime’s fleet in its app.

About 500 employees who work on Uber’s bike and scooter offerings could lose their jobs.

“Lime has indicated that they plan to offer interview opportunities to a few members of our team, while others will receive severance packages,” Dennis Cinelli, head of Uber’s micromobility team, said in an email to employees that was seen by the Times.

Financial analysts expect the companies to begin to recover as consumers return to work. They are still sitting on a lot of money. Uber has $9 billion, and Lyft has more than $2 billion. Before the virus, Airbnb had $3 billion in cash on its balance sheet; since then, it has raised $1 billion in funding and secured a $1 billion term loan.

But investors still question the companies’ claims that they will become profitable as they tap the $1.2 trillion that Americans spend each year on transportation costs like car ownership and maintenance.

Although Uber and Lyft said they provided a preferable transportation option over public transit, some analysts worried that consumers would choose to drive themselves rather than share a car with a ride-hail driver and risk spreading the virus.

Tweets by @forbesindia
How my boss monitors me while I work from home
COVID-19 might hit markets with worst economic consequences: Entrepreneur Abdullah Almanna