The abrupt halt of commercial activity threatens to impose economic pain so profound and enduring in every region of the world at once that recovery could take years. The losses to companies, many already saturated with debt, risk triggering a financial crisis of cataclysmic proportions 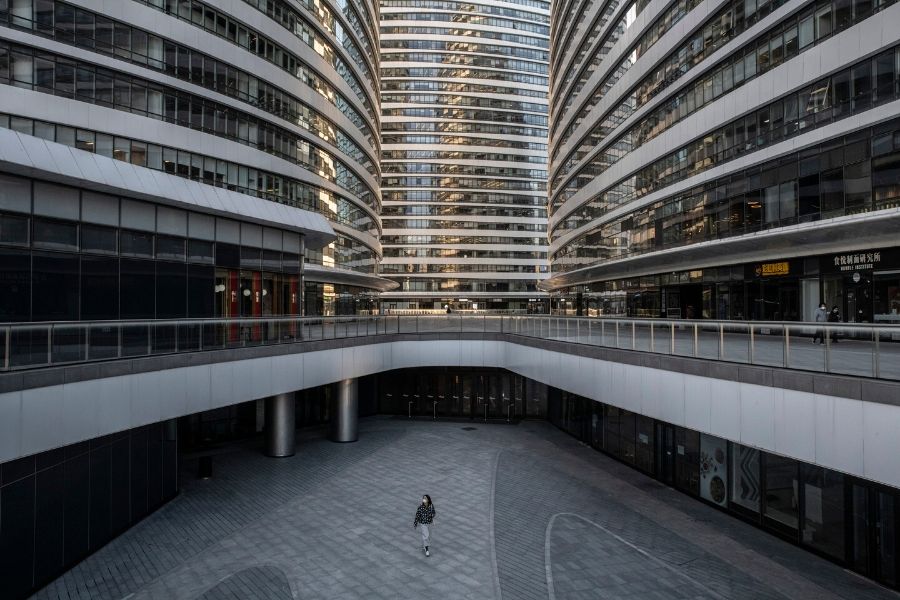 A pedestrian walks in an empty commercial and office building compound in Beijing on March 19, 2020. Fears are growing that the worldwide economic downturn delivered by the coronavirus pandemic could be especially deep and lengthy, with recovery limited by continued anxiety. Image: Gilles Sabrié/The New York Times

LONDON — The world is almost certainly ensnared in a devastating recession delivered by the coronavirus pandemic. Now, fears are growing that the downturn could be far more punishing and long lasting than initially feared — potentially enduring into next year, and even beyond — as governments intensify restrictions on business to halt the spread of the pandemic, and as fear of the virus reconfigures the very concept of public space, impeding consumer-led economic growth. The pandemic is above all a public health emergency. So long as human interaction remains dangerous, business cannot responsibly return to normal. And what was normal before may not be anymore. People may be less inclined to jam into crowded restaurants and concert halls even after the virus is contained. The abrupt halt of commercial activity threatens to impose economic pain so profound and enduring in every region of the world at once that recovery could take years. The losses to companies, many already saturated with debt, risk triggering a financial crisis of cataclysmic proportions. Stock markets have reflected the economic alarm. The S&P 500 in the United States fell more than 4% Wednesday as investors braced for worse conditions ahead. That followed a brutal March, during which a whipsawing S&P 500 fell 12.5%, in its worst month since October 2008. “I feel like the 2008 financial crisis was just a dry run for this,” said Kenneth S. Rogoff, a Harvard economist and co-author of a history of financial crises, “This Time Is Different: Eight Centuries of Financial Folly.” “This is already shaping up as the deepest dive on record for the global economy for over 100 years,” he said. “Everything depends on how long it lasts, but if this goes on for a long time, it’s certainly going to be the mother of all financial crises.” The situation looks uniquely dire in developing countries, which have seen investment rush for the exits this year, sending currencies plummeting, forcing people to pay more for imported food and fuel, and threatening governments with insolvency — all of this while the pandemic itself threatens to overwhelm inadequate medical systems. Among investors, a hopeful scenario holds currency: The recession will be painful but short-lived, giving way to a robust recovery this year. The global economy is in a temporary deep freeze, the logic goes. Once the virus is contained, enabling people to return to offices and shopping malls, life will snap back to normal. Jets will fill with families going on merely deferred vacations. Factories will resume, fulfilling saved up orders. But even after the virus is tamed — and no one really knows when that will be — the world that emerges is likely to be choked with trouble, challenging the recovery. Mass joblessness exacts societal costs. Widespread bankruptcy could leave industry in a weakened state, depleted of investment and innovation. Households may remain agitated and risk averse, making them prone to thrift. Some social distancing measures could remain indefinitely. Consumer spending amounts to roughly two-thirds of economic activity worldwide. If anxiety endures and people are reluctant to spend, expansion will be limited — especially as continued vigilance against the coronavirus may be required for years. “The psychology won’t just bounce back,” said Charles Dumas, chief economist at TS Lombard, an investment research firm in London. “People have had a real shock. The recovery will be slow, and certain behavior patterns are going to change, if not forever at least for a long while.” Rising stock prices in the United States have in recent years propelled spending. Millions of people are now filing claims for unemployment benefits, while wealthier households are absorbing the reality of substantially diminished retirement savings. Americans boosted their rates of savings significantly in the years after the Great Depression. Fear and tarnished credit limited reliance on borrowing. That could happen again. “The loss of income on the labor front is tremendous,” Dumas said. “The loss of value in the wealth effect is also very strong.” When the pandemic emerged, initially in central China, it was viewed as a substantial threat to that economy. Even as China closed itself off, conventional wisdom held that, at worst, large international companies like Apple and General Motors would suffer lost sales to Chinese consumers, while manufacturers elsewhere would struggle to secure parts made in Chinese factories. But then the pandemic spread to Italy and eventually across Europe, threatening factories on the continent. Then came government policies that essentially locked down modern life, business included, while the virus spread to the United States. “Now, anywhere you look in the global economy we are seeing a hit to domestic demand on top of those supply chain impacts,” said Innes McFee, managing director of macro and investor services at Oxford Economics in London. “It’s incredibly worrying.” Oxford Economics estimates that the global economy will contract marginally this year, before improving by June. But this view is likely to be revised down sharply, McFee said. Trillions of dollars in credit and loan guarantees dispensed by central banks and governments in the United States and Europe have perhaps cushioned the most developed economies. That may prevent large numbers of businesses from failing, say economists, while ensuring that workers who lose jobs will be able to stay current on their bills. “I am attached to the notion that this is a temporary crisis,” said Marie Owens Thomsen, global chief economist at Indosuez Wealth Management in Geneva. “You hit the pause button, and then you hit the start button, and the machine starts running again.” Worldwide, foreign direct investment is on track to decline by 40% this year, according to the United Nations Conference on Trade and Development. This threatens “lasting damage to global production networks and supply chains,” said the body’s director of investment and enterprise, James Zhan. “It will likely take two to three years for most economies to return to their pre-pandemic levels of output,” IHS Markit said in a recent research note.

Tweets by @forbesindia
India is a price-driven market: Schaeffler's Harsh Kadam
What happened after 'Tiger King'