Need a strong indicator that a real estate bubble is storming back? Armando Montelongo will make $50 million this year leading borrow-and-buy seminars 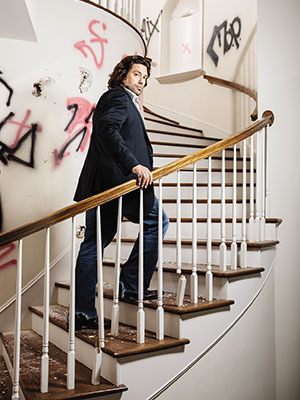 Image: Michael Thad Carter for Forbes
“The most sought-after real estate expert in the world”: Montelongo has created a cult of self

It’s nearly midnight, and the energy is slipping from the 400 people inside an auditorium done up like a Spanish mis- sion in Riverside, California. Despite hours of yelling, dancing, massaging and hugging his way through the ﬁrst of a three-day wealthfest, Armando Montelongo, the 42-year- old minister of get-rich-quickdom, real estate edition, senses the lull. He bounds up the stage to lead a rendition of ‘YMCA’, but not before remarking to me, “It’s a little more f---ed up than you thought, right?”

Yes, it is. Armando Montelongo Seminars offers long weekends of questionable advice, raucous showmanship and tours of foreclosed homes in some of America’s poorest sections. His secret formula: Go deeply into debt to buy distressed properties, ﬁx them up minimally and sell them quickly. “People throw money at me to become multimillionaires,” Montelongo, a large, stocky guy with shoulder-length black hair, tells the crowd. “This is the means to your end.”

No guarantee that end will terminate in six zeroes. Montelongo, the one-time star of A&E’s Flip This House, offers scant proof the formula has turned his “students” into plutocrats. Asked to provide successful seminar alums, Montelon- go serves up two—neither has made millions. Billy Godsey declines to detail his ﬁnances. Jake Leicht claims he’s made about $180,000 in 16 months buying 18 homes.

The one certain multimillionaire to emerge from Montelongo’s seminars? Montelongo himself. His formula is simple: First, expose people to his system through a 90-minute free seminar. Then funnel them into a second ($1,497 per couple) and, ﬁnally, a third: A three-day extravaganza like the one I attended ($40,000 for two). Montelongo claims his San Antonio, Texas, company will rake in about $100 million in revenue this year from  350,000 people attending one of 3,580 events. That’s up from 57,000 folks at 120 seminars, generating $12 million in sales in 2009, its ﬁrst  year of business. If Montelongo’s numbers are accurate, and his margins are typical for this kind of thing, then he will personally pocket $50 million this year (he owns 100 percent of the enterprise). By that same yardstick, his business is ostensibly worth $80 million. Add that to cash and traceable real estate (discounted 65 percent for debt) and Montelongo has somehow built a fortune of $200 million or so from telling others to borrow and speculate.

Who is this guy? You get the official picture watching old episodes of Flip This House and Montelongo’s 28-minute infomercial (“The most sought-out real estate expert in the world!”) or reading parts of his book, Flip and Grow Rich (a play on Napoleon Hill’s motivational classic, Think and Grow Rich). The self-created narrative is that he grew up in San Antonio and that at the age of 16 his father’s construction business went poof in the real estate bust.

The biopic always cuts to 15 years later, when Armando is married with a young son but suffering hard times—foreclosed on, relying on food stamps and living in the garage of his in-laws. That year a mould scare in Texas depressed home values… and helped give Montelongo an idea: Start buying (and selling) distressed properties. He borrowed $1,000 from his dad and never glanced back. Three years later—presto!— he was a multimillionaire.

You get another view by following a long trail of complaints. Two years ago the Texas attorney general’s office launched an investigation into the seminar’s practices. Settling the case without admitting any wrongdoing, Montelongo agreed, among other things, to refrain from any “false” claims, to give “conspicuous notice” that the free seminar is a vehicle to sell goods and services (CDs, books and DVDs), and to provide prompt  refunds. Montelongo shrugs it off: “If you don’t want to be criticised, then don’t do anything great with your life.”

The seminar company rates an F from Better Business Bureau (BBB). “You don’t get anything substantive,” complains Lori Jakubowski, a realtor from near Pebble Beach, California, who paid $1,500 for two sessions. “There  were a lot of people who were unemployed just looking for some easy way to make money. And I felt like an idiot because I was right in there with them.” Of the 150-plus complaints received in the last three years, most grumble about the product, misleading advertising and slow-to-nonexistent refunds. “In 2010 and 2011 they just ignored the complaints,” says Carrie Hurt, CEO of the BBB’s branch in Austin, Texas. “Now they’ve started responding.” Sometimes with a smirk. Says Andy Moon, Montelongo’s corporate attorney: “You know the BBB is based in Austin, which is very liberal and in the consumer protection capital of the world.”

No alum is currently suing. Perhaps because of the exacting terms of the contract, which each attendee must sign. It absolves Montelongo of liability for any “ﬁnancial, investment, legal, accounting or other professional services or advice” they offer.

“It is your sole responsibility to seek independent advice from professionals of your choosing.” No ﬁnancial advisor could get away with that. “They can’t attempt to disclaim liability for their advice,” says Mark Astarita, a securities and corporate attorney in Verona, New Jersey. “They need to stand by their advice. That’s what they’re paid for.”

So what are customers paying for? Exposure to Montelongo (though he seldom attends seminars) and his formula for success: How to ﬁnd foreclosed properties, ﬁnance and rehab them, how and when to sell them. Or so it’s billed. Over three gruelling days you get some practical advice—much of which can be found in Flip and Grow Rich (used copies recently sold for as little as 25 cents on Amazon.com) or Flipping Houses for Dummies ($8). (“Books are a starting point,” says his spokeswoman.) The key is Montelongo’s 65 percent rule, which determines what to pay for a wreck and still expect a proﬁt. In his example, a house worth $100,000, after repairs of $20,000, should cost you no more than $45,000. Take good notes at the speed of a stenographer, because there are no handouts—and no scheduled breaks. You may lose out on a tip if you go to the bathroom.
“Do you know what numbers they’re talking about?” Mary, an Air Force widow, asks me. Frances and her husband, an elderly Las Vegas couple, have trouble hearing over the noise during a quiz on housing prices and move closer to a staffer in a strained effort to read his lips.

There is plenty of noise over the three days—loud music, along with ﬁst bumps from staffers and so-called millionaire hugs. “There’s a direct correlation between how much you respond  to Armando when he tells you to get crazy and how much money you’ll make from the programme,” says Jordan Odiorne, the company’s COO—and Montelongo’s nephew. The exact connection remains a mystery.

In fact, over the three days the crowd gets Montelongo for, maybe, 60 percent of the time on this tour. Volunteers—Armando groupies—lead the house tours. Most are seminar alums who now fancy themselves real estate investors. They take 50 or so people into depressing ﬁxer-uppers, four a day.

Places like the four-bedroom, two-bathroom ranch house with a broken picket fence in Highland, California Brown grass crunches underfoot; eerie grey splotches stain the blue clapboard. Step inside to see ﬁst-size holes pocking the walls. Across the kitchen and living room, the former owner spray-painted profane messages to his ex-wife. The home is listed at $141,000.

Entourage members Raul Mateos and Mark Perez work through the rooms, hustling everyone forward. They suggest making quick guesstimates of repairs and pass over details. What’s covering that window? “I have no idea, man,” says Mateos. “Just patch it up.” How to make the ﬂoors more attractive? “Ask your realtor what’s common with your area,” Perez advises.

Among the most practical tips: Rehab roofs and walls as needed; ﬁx any distressed wiring or heating and water problems; focus your limited budget on the bathrooms, kitchen and bedrooms; replace broken toilets and appliances but not the fridge; use beige paint for walls. “If you’re in a highly Hispanic neighborhood and there are plastic ﬂamingos in the yard, leave them,” says Montelongo. “You can buy a house in a war zone if you know the house across the street moved fast”—within 90 days.

Some advice is treacherous. Kurt “The Shirt” Weinrich, who once ran food operations for a casino company and is now a money manager, advises opening self-directed IRAs and ﬁlling them with real estate for an easy 28 percent annual  return. “Have we seen 50 percent? Yes. 100 percent? Yes. We had one student roll over a $100,000 account into a self-directed IRA last year, and now that account is at $1.2 million.” Complex and risky, self-directed IRAs often  involve alternative investments like commodities or tax liens. They’re managed by the account holders; custodians hold the account and execute investment decisions but offer no investment advice. The SEC issued a warning on them in 2011, noting they frequently expose investors to scams. Tax rules force lockups for decades—allowing unscrupulous operators long stretches of unsupervised mischief.

More questionable advice from Montelongo: Go into debt as deeply as possible to maximise returns, directly contradicting the counsel he offers in his infomercial and common sense. Ask the several million overleveraged real estate dabblers who went bankrupt after the real estate bubble last began bursting ﬁve years ago. (“Our method minimises any risk during all cycles,” insists his ﬂack, adding that Forbes is oversimplifying the approach by not fully explaining the rehab and ﬁnancing processes.)

What do attendees make of all this? Some, like Jeanette, a mother from Houston, are sanguine. “I know that when I make my ﬁrst bid, it will go through,” she says. Several people complain. “Brainwashing,” sums up Tony, who patrolled the Cambodian jungle while in the Army and the streets of Newark, New Jersey, as a cop before retiring to Tampa, Florida. “Really brought me back to my military days.”

Montelongo has a polished answer for his critics: “We have 300,000 people a year coming through our events and less than a couple hun- dred complaints. Walt Disney in his greatest day would not have dreamt of customer service like that.” Spoken like someone well versed in the history of selling fantasies.

Tweets by @forbes_india
State of the Economy: Stagflation
The World's Most Influential Celebrities