For generations, the Navajo relied on coal mining for good jobs and to fill the tribal coffers. But with the end in sight for unclean power, the tribe created a company to get them through the transition—yet, unbelievably, it bought them more mines. This surprise deal made them America's third-largest coal miners 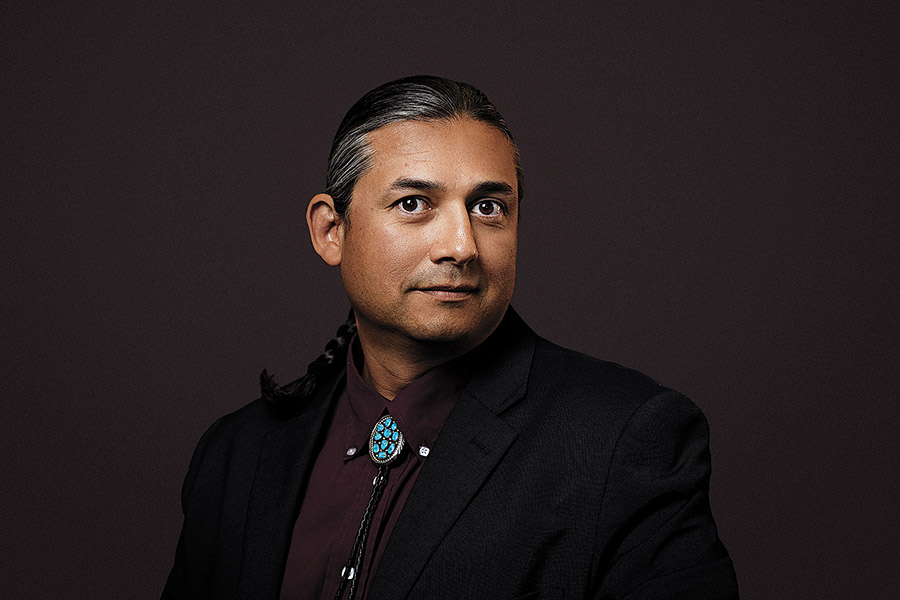 “What makes us different is the sense of duty we owe to the people and the land,” says Timothy McLaughlin, chairman of the Navajo Transitional Energy Company, who spent three years as a federal environmental lawyer before turning to tribal law
Image: Taylor Castle for Forbes

It’s a hardscrabble existence for many of the 175,000 Navajo who live on the 27,000 square miles of tribal lands that stretch across the borders of Utah, Arizona and New Mexico. The median household income hovers around $30,000 a year, and more than a quarter of homes have no electricity. In early May, the coronavirus was spreading so fast that New Mexico blockaded roads in and out of Gallup, the picturesque town on the edge of the Navajo nation known as the “heart of Indian country”. The pandemic followed a particularly tough winter for some families. In November, the Kayenta strip mine and the Navajo Generating Station it supplied, both on tribal lands, finished shutting down, eliminating 800 relatively high-paying jobs and a free source of coal used by many Navajo to heat their homes.

So now, the Navajo Transitional Energy Company (NTEC) trucks coal around the reservation. Tribe members queue to get a load dumped into their pickups from a Bobcat dozer. “They’d love to have a good job and a gas furnace. But it’s just not the reality,’’ says NTEC Chairman Timothy McLaughlin, a 40-year-old attorney who grew up on the reservation and spent three and a half years as a federal environmental lawyer before turning to tribal law. It’s hard to worry about your carbon footprint, he adds, “when the alternative is freezing to death”.

Delivering free coal is a strange task for NTEC, which is already an odd entity. The company was created seven years ago with the express purpose of transitioning the Navajo through the twilight of the coal business. It planned to do that in two ways. First, by taking over mining operations on the reservation from big international companies, thereby keeping more money in the tribe to accomplish NTEC’s primary goal: To help the Navajo build up other industries to replace disappearing coal royalties and jobs. Everything began according to plan: In 2013, NTEC took over ownership of the Navajo Mine from BHP Billiton, saving 700 jobs at the mine and the accompanying Four Corners power plant. It’s been a good investment, generating $233 million in cash for the tribe under NTEC’s watch.
So in 2018, Navajo leaders asked NTEC to continue the strategy and negotiate to acquire the Kayenta mine and Navajo Generating Station. What NTEC did instead almost defies belief. Unable to agree how to share future decommissioning costs with the current owners, who wanted to cap their liability costs, NTEC walked on the deal. The owners shut down the power plant and mine, wiping out $40 million a year in coal royalties, about a quarter of tribal revenue.

Then, last August, NTEC announced a deal to acquire three enormous mines in Wyoming and Montana from bankrupt Cloud Peak Energy for about $100 million and the assumption of all cleanup costs. The acquisition increased NTEC’s coal output more than tenfold to nearly 60 million tonnes, 9 percent of total US tonnage, making the Navajo America’s third-largest coal miners.

Tribal leaders were shocked. NTEC, although owned by the tribe, was set up as a semi-autonomous organisation. It wasn’t required to consult with the tribe on the purchase—and it didn’t.

Navajo President Jonathan Nez branded the move “disrespectful” and yanked the tribe’s financial backstop of NTEC, forcing it to pay more for hundreds of millions’ worth of surety bonds (mine decommissioning insurance, basically). “The tide was moving toward renewables,’’ says Myron Lizer, vice president of the Navajo, who was elected with Nez in 2018 on a green-energy platform, told Forbes. “Now we own four coal mines”—three of which aren’t even on Navajo land.

NTEC CEO Clark Moseley, a 68-year-old mining engineer, says the Cloud Peak deal was just too good to pass up and insists NTEC couldn’t discuss confidential negotiations, even with tribal leaders. “The purchase was a unique opportunity, as we could never have acquired anything close to this potential revenue stream in the open market,” he says. In the year before, NTEC acquired the three mines, Cloud Peak generated $67 million in gross profit on $832 million in revenue.

This might just be a case of a carpenter who sees every problem as a nail. Moseley has spent five decades working in the coal industry, and mining has been the reservation’s economic lodestone for just as long. The Four Corners region has some of the nation’s richest coal beds, and thousands of mining jobs paying an average of $100,000 once provided a foundation for the Navajo middle class. But it couldn’t last. The inexorable death of the Navajo coal industry began nearly two decades ago when California decided that power generated by burning coal was too dirty to use. Neighboring states followed that lead. Across the US, the amount of coal being burned in power plants is at a 42-year low.

Good thing NTEC isn’t relying only on domestic demand, then. One overseas customer is Japanese utility Jera, which has contracted to buy about 1 million tonnes of coal per year from NTEC. That tonnage will help fuel the two new coal-burning power plants Jera is building in Fukushima Prefecture, where they will replace the electrical output of the nuclear reactors that melted down in 2011.

All well and good, but it’s hardly transitioning away from coal or improving relations with tribal leaders. “We’re conscious of their reaction and understand their position,” says McLaughlin, the NTEC chairman. “Moving forward, we’ll make sure we communicate on a constant basis.” They’ve already communicated their next move: Investing in a rare-earths mine in west Texas.

Tweets by @forbesindia
How to envision your organisation's future
Soon, get drones to deliver medicines in under 30 minutes