My weaknesses died on that day: Malala 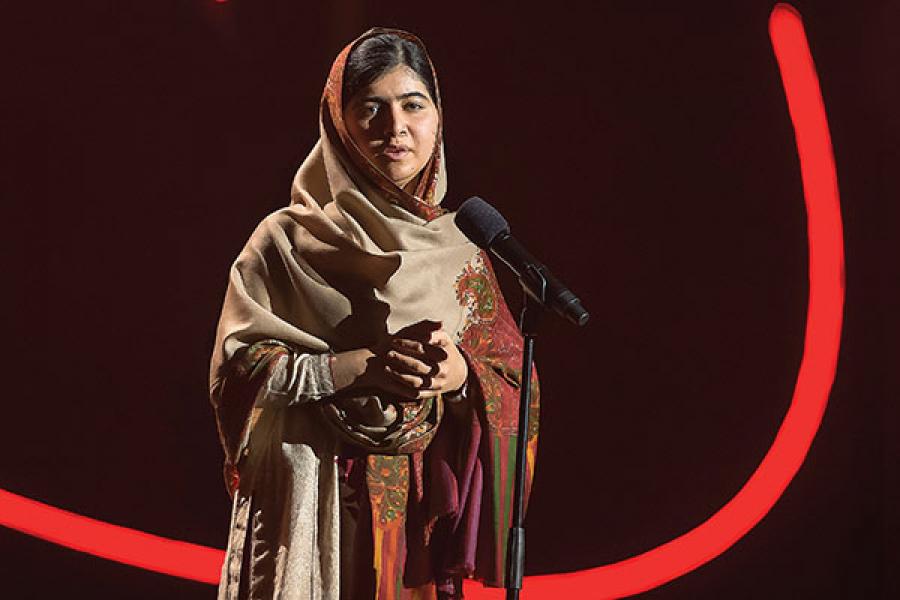 Image: Nigel Waldron / Wireimage Via Getty Images
Nobel Peace Prize-winner Malala Yousafzai was shot by the taliban for going to school. they targeted the wrong girl

Laurene Powell Jobs: I have the privilege of introducing you to the bravest person you’ll ever meet. You know the broad outlines of Malala Yousafzai’s story.

In October 2012, a masked Taliban gunman in Pakistan’s Swat Valley flagged down a school bus, boarded it and shouted at the terrified girls, “Who is Malala?” He then shot 15-year-old Malala in the face. Her crime? Speaking up for the right and belief that all children should be able to get education.

Their misguided violence resulted in making her voice and message exponentially stronger. Over the past year, I’ve had the opportunity to learn more about why the Taliban, and all who deny girls the right to learn, have everything to fear from this young woman. For this is a voice, as you will hear, that cannot and will not be silenced. As my friend who’s filming her documentary told me, “The Taliban shot the wrong girl”.

Powell Jobs: Talk a bit about your childhood and some of the conditions in the Swat Valley that shaped your upbringing.
Yousafzai: Swat Valley is a very beautiful place, with tall mountains, beautiful rivers and lush, green hills and trees.
We used to have tourists from all over the world.

I was going to school every day. My father, my mother—we all were in a very small house, not rich economically but rich in our values, in our ethics.

Then some extremists, the Taliban, came to the Swat Valley and changed our lives. Girls’ education was banned.

More than 400 schools were destroyed. Women were not allowed to go to markets. Hairdresser shops were blasted. They said that no one has the right to be free.

I had two options. One was to remain silent and never to speak and then to be killed by the terrorists. The second option was to speak up for my rights and then die. And I chose the second one.

On October 9, 2012, I was shot by the terrorists. They made a very big mistake, because I was afraid that they might be able to stop me. But they proved that no one can stop me. My weaknesses died that day, and a strength was born. So I think I should be very thankful to them.

Powell Jobs: What happened after you were shot? Where are you and your family living now?
Yousafzai: After I was shot, I was brought to Birmingham in England to the Queen Elizabeth Hospital, which is a very good hospital with nice doctors and nurses. They took care of me and all the surgeries were successful. I’m going to a very nice school. The girls at the school—they’re brilliant. I’m quite busy, and sometimes I miss a lot of lessons. I try my best to work hard.

Powell jobs: You can’t go back to Pakistan?
Yousafzai: It seems quite difficult. I wish to go back. We talked to the government. It does not seem safe.

Powell Jobs: How do you balance speaking to heads of state and then speaking to your girlfriends? How do you manage to navigate between all that comes with being a teenager and also this amazing opportunity that you have to be a spokesperson for girls’ education across the world?
Yousafzai: Most of the time, I do my activities for education and campaign for education on the weekends or holidays. Other than that, I don’t miss school days except for important events such as today.

Powell jobs: You had the idea of the Malala Fund when you were still in school in Pakistan?
Yousafzai: Yes, I did. It was for those girls who were suffering from domestic child labour. There was a woman who was coming to our house, and she had three little daughters. And I told my father, “I can’t see these little daughters working in our house”. But they would have no other way of earning a living.

My father was running a school at that time. The school is still there. He started it in 1994, and it had 1,100 students—both girls and boys. I told my father, “These girls should get free education in your school”. My father did admit those girls in school, and they have scholarships now from the Malala Fund. 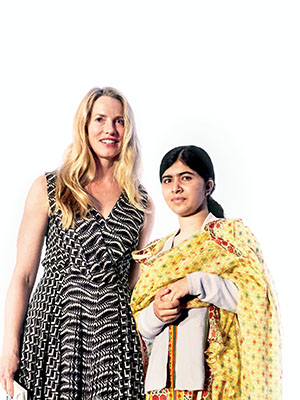 Image: Jonathan Kozowyk For Forbes
Advocates for education from opposite sides of the globe: Laurene Powell Jobs of California and Malala Yousafzai of Pakistan
Powell Jobs: You have an incredible opportunity to shape a conversation around issues that are critically important for girls across the world. And you will, by virtue of who you are, shine a bright spotlight on inequities and injustices. So why don’t you walk us through a bit of the priorities of the Malala Fund?
Yousafzai: When I was brought to Birmingham, at first I did not know what to do or how to restart the fund.

We started the Malala Fund again nine months ago. We said that we want to do two things. One is advocacy, to reach responsible people and to ask them to do their part. The second is going and working on the ground, to see what problems children are facing and then help them in getting education. In each place, the situation is different, so you have to find a different solution for it. The Malala Fund also wants to recognise those girls who speak up for their rights. We want to give them a big platform so that they can speak in front of the whole world and highlight the issues that they are facing.

Powell Jobs: What are some of the programmes that you’ve started already?
Yousafzai: These past few months we did a lot. We started our first project in my beautiful Swat Valley, my hometown. We introduced scholarships for those girls who are suffering from child labour. Now these girls are getting education. We also support their families economically.

We started a project in Jordan for Syrian refugees. The schools were in a tent, and children aged 5 to 13 were in one classroom, and there was only one teacher. We wanted to provide them with good facilities and also support them.

In Kenya, I went to the Masai Mara area. We started working with Free The Children, which is an amazing organisation. They build a school, but then they don’t leave the school. They say, “We want to make sure that the students are going there”. The students get good facilities, and there’s a hospital to take care of their health. Seeing that, I became hopeful that what I have always dreamt of—making good schools and achieving sustainable development—I thought that, yes, it is happening.

So I think the government’s role is very important. We haven’t done great work with governments yet, but I’m hopeful that governments will also support us so that we can do collective work with them in Pakistan and in Kenya.

Unfortunately, there are so many conflicts nowadays—in Syria, in Iraq. And the situation in Pakistan is getting worse every day. It just makes me worry about what is going to happen and who is going to find a solution.

And they should also try to find the reason why (the number of) these terrorist groups have risen.

Powell jobs: What’s stunning to me, having met your dad and you, is that despite the fact that you almost died, despite the fact that your family is living in exile, you have no bitterness in your heart. There’s no anger there that’s fuelling your work. It’s actually based in love and compassion. Where do you find that centre?
Yousafzai: The first thing is that I don’t actually remember being shot. I don’t really think about it. But the other important thing is that my father is there, and I always believe how much courage he has. And he inspires me.

And then there’s another person we don’t mention all the time: My mother. My mother always encourages us to continue this campaign. She believes that what we are doing is the truth and we should never be afraid of telling the truth.

If I want the terrorists to stop wars, to stop conflicts and to stop hating people, then I should also not hate them and I should not do any harsh things towards them. That’s my philosophy.

Tweets by @forbesindia
Happier endings: Dealing (better) with mortality and pain
How 'Desh' Deshpande is helping Indian NGOs scale up