Project Frog designs and ships schools, convenience stores and office buildings all over the country. Some assembly required 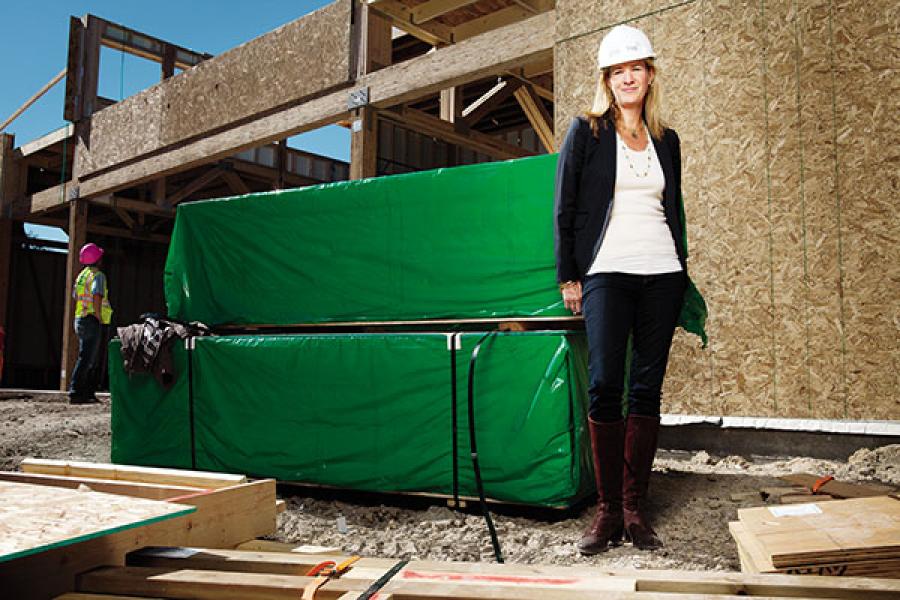 Image: Matt Hawthorne for Forbes
Project Frog designs and ships schools, convenience stores and office buildings all over the country. Some assembly required

On the corner of a congested Dallas intersection, the umpteenth 7-Eleven is being built or, rather, assembled. The construction site consists of tidy stacks of ﬂat-packed, prefabricated wall units, roof panels and other jumbo components trucked from Michigan. A pair of bathrooms, complete with toilet roll dispenser and baby-changing table, are being lowered by crane into the 3,000-square-foot store’s shell, where they’ll be plugged into the plumbing.

Prefab, long the province of double-wides and, more recently, eco-friendly designer homes, is going commercial. Project Frog, the San Francisco startup behind the 7-Eleven store, is dragging a 19th-century industry into the future with stylish, energy-efficient buildings that can be built in less time and as much as 50 percent cheaper.

The six-year-old company, which raised $30 million in venture backing from General Electric and other investors, has built 16 buildings totalling 75,000 square feet and has 300,000 square feet in the pipeline for 2013. Revenue quadrupled in 2012 to more than $25 million, and the ﬁrm is nearing proﬁtability, thanks largely to outsourcing its component construction to contractors.

“We have more in common with Boeing or Toyota than the way buildings traditionally go up,” says Project Frog Chief Executive Ann Hand, a 44-year-old former executive with British Petroleum. “We design a common chassis or platform for different types of buildings that people can reprogramme according to their needs.”

Commercial prefab offers plenty of room to grow, accounting for just 1.5 percent of the $183 billion US commercial building market in 2011, up from 1 percent the previous year, according to the Modular Building Institute, a trade group. Project Frog started out building schools and government offices and is branching into retail, but Hand has her eye on a bigger prize: Health care.

McGraw-Hill estimates there was $23 billion in health care construction in the US in 2012, up from $22.5 billion in 2011, with $8 billion devoted to green building. An ageing population now covered more broadly by ObamaCare means more patient traffic. “The trend is to put those facilities where patients live to be closer to your customers,” says Michael Huaco, vice president of corporate real estate and business strategy for Kaiser Permanente, the California-based health care giant.

Kaiser is adding on an average between 500,000 and 1 million square feet of space a year, mainly for medical office buildings. Huaco is having Project Frog put up a 40,000-square-foot building in Kona, Hawaii, that he expects will cost 10 percent to 20 percent less than conventional construction while being 20 percent more energy-efficient, no small matter given Hawaii’s high electricity rates.

Project Frog’s research laboratory is in a cavernous warehouse on the San Francisco waterfront. Ash Notaney, Project Frog’s vice president of product and innovation, walks me through the smaller-size prototype of a two-storey, 12-classroom school that will be built in Santa Ana, California next year. “Prefabricating buildings is actually really hard, and you have to get all the details right up front, as it’s all about sequencing and assembly,” says Notaney. He opens a section of a wall panel to show that it comes from the factory already insulated, with designated spaces and connections for the electrical systems, which arrive ready for installation.

The buildings’ ample natural light and automated LED control system will slash lighting demand by 85 percent, according to Notaney, and the structure’s tight seal and other improvements will cut air-condi- tioning costs. He says California schools of a similar quality cost about $300 a square foot, but Project Frog ’s Santa Ana school will come in at $210.

Project Frog’s next prototype is a medical building that will include a core wall containing plumbing and mechanical systems to serve a block of six examination rooms. “Because they’re ﬂat-packed, I can get 12 of them on a single truck, which will serve all 72 rooms in the building,” says Notaney.

Project Frog expects to chop eight months off the typical construction time when it assembles Kaiser’s Hawaii medical building. Huaco is considering the ﬁrm for future projects in California, but his industry colleagues may not be so amenable. “The health care industry is the toughest buyer I know, and it’s quite staid and extremely bureaucratic,” says Larry Leisure, a Project Frog board member and operating partner at venture capital ﬁrm Kleiner Perkins Cauﬁeld & Byers.

He says Project Frog’s relationship with Kaiser gives it credibility. Even getting a slice of the medical-building boom could be a blockbuster. “Just in California, the opportunity is huge,” he says.