By wrapping $150 car floor liners in the flag, WeatherTech's David MacNeil is creating one of the world's more unlikely luxury brands 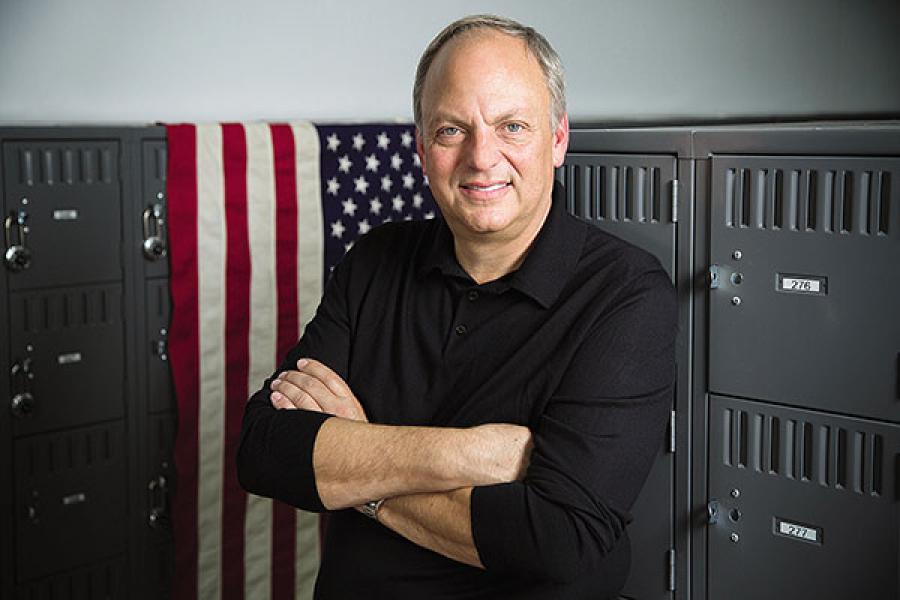 Three minutes into the second quarter of the Super Bowl, a curious 30-second spot broke the slick run of corporate pitchmen. It looked like a local cable ad: A banker, a lawyer and a guy in a hard hat stare straight into the camera and tell an entrepreneur aiming to manufacture products, hire workers and build facilities in the US that “You can’t do that”. Too expensive. Too risky. He defies them, and wins.

There’s nothing odd, of course, about wrapping yourself in the flag to sell products. Next to sex, it’s the most obvious play in advertising. But in this case the ad happened to tell the true story of one of the stranger luxury goods companies in the world: WeatherTech, a Chicago-area maker of car floor mats. All of which are made in the USA.

“It was an evolutionary step and an investment in our future in branding the WeatherTech name and getting it out to all of America,” says CEO and founder David MacNeil, 55, when asked why he shelled out $4 million to put the ad. “And it helped us get across a message that is near and dear to me: The importance of US manufacturing, our industrial infrastructure, using American raw materials and hiring American workers.”

Not that MacNeil is some jingoistic superpatriot. While there are sound operational reasons for keeping his manufacturing local, for him a big draw for making his $150 (on average) floor mats in America is that in an age of outsourcing, “Made in the USA” sells. And MacNeil has bet big on that approach. He employs 1,000 workers at six factories and 400,000 square feet of factory space in suburban Chicago. He forges all of his own tooling for 18,000 different parts, including pickup-bed liners, mud flaps and other auto accessories. WeatherTech designs its packaging and prints all of its materials in-house, right down to a tiny product catalogue the size of a pocket map with one of MacNeil’s American-manufacturing screeds on the inside cover. They export to 21 foreign markets around the world. The company is the largest consumer of sheet plastic in America. After nearly a decade of double-digit annual growth, sales were about $400 million last year, with estimated pre-tax profits of more than $100 million.

“His belief in his product is bone-deep, and he puts a lot of money behind it,” says Chris Kersting, president and CEO of the Special Equipment Market Association. “WeatherTech has been very aggressive, so they’ve gone to the very forefront of the made-in-America trend in our business.”

In 1988, MacNeil was vice president of US sales for the automotive high-performance outfit AMG, now a unit of Daimler AG, when he noticed the poor quality of car floor mats, even for luxury vehicles. So at the age of 30, MacNeil took out a $50,000 second mortgage and began importing expensive mats from the United Kingdom. Soon he shortened supply lines by finding an American contract manufacturer.

Then MacNeil came up with the idea of digitally measuring each vehicle for a precision-fit liner to replace standard mats that flop around on the floor. His product features deep channels to trap water, road salt, mud and sand, and edges that ride all the way up to the top of each foot well. Its thermoplastic elastomers don’t turn brittle in midwestern sub-zero temperatures or break down in summer heat. Then MacNeil decided to bring production in-house in 2007. Backed by a new made-in-America marketing campaign in national publications such as the New York Times, sales soared, despite the Great Recession.

Pumping out mats in China would cost considerably less, but MacNeil believes there’s a competitive edge to having his factory next to his oﬃce and not half a world away. He insists, for example, on taking his own digital-laser measurements of each production vehicle rather than borrowing specs from the carmaker. “That way I’m sure my data is accurate,” MacNeil explains. “We also have redundant [manufacturing] equipment so that if, say, five customers all want more mats one week, we can deliver to all five right away.”

Keeping such close control helps, because most aftermarket aficionados order accessories within months of buying their cars. So retailers demand suppliers that can stay ahead of the game. “We stock $170 million worth of inventory, with 300,000 part numbers across 800 lines,” says Ed Orzetti, CEO of Keystone Automotive Operations, a huge aftermarket distributor based in Exeter, Pennsylvania. “And when it comes to making sure the right part shows up at the right time, WeatherTech gets it right every time.”

WeatherTech prospers in high-tax Illinois even though MacNeil spurns offers of local abatements and other incentives because, he says, they come with too many strings attached. And with wages as high as $20 an hour for semi-skilled positions, WeatherTech is generous in an area where plastic-extrusion jobs average $16 an hour; turnover is nearly non-existent. “If I had to report to a board, there are some decisions I couldn’t justify,” MacNeil says.

Beyond that, MacNeil keeps trying to figure out new markets for formed-plastic products. Last year it introduced TechFloor tiles for garage and trade show floors.

And if those ideas don’t take off, MacNeil has plenty more. “It’s pretty simple. If you deliver a technologically advanced, high-quality product, your business will grow—if the customer is happy with the product,” he says.

(This story appears in the 27 June, 2014 issue of Forbes India. You can buy our tablet version from Magzter.com. To visit our Archives, click here.)

Tweets by @forbes_india
Power Shift: Can Mary Barra Fix General Motors?
A Safer Cigarette? Philip Morris Is Working On It