Azim Premji: The Business of Ecology

The multiple debates over ecology are bound to be the defining issues of humanity over the next few decades. This would drive both risks and opportunities. Smart companies know that an improvement in ecology will determine economic sustainability. And whatever is ethical, whatever is good for the society, will eventually be good for business too 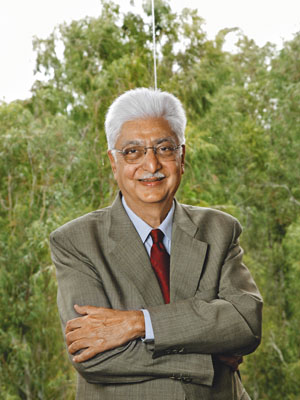 Azim Premji is the chairman of Wipro and is one of India’s most respected businessmen and philanthropist. He inherited Wipro, a vegetable oil company, at the age of 21. In the 1970s, he expanded into software services that would go on to make him one of the richest Indians and put the company among the leaders. Today, he is busy shaping up a third epoch in Wipro’s history — in ecology

Our IT Services business operates from large well maintained campuses. The campuses in India have a few thousand people each — the largest one in Bangalore has over 20,000 people. Over the years, we have worked hard on managing water at all our campuses. We harvest and store rain water, which itself supplies 30-50 days of total water requirements of our campuses. Water that we harvest, but cannot store, is funneled to recharging ground water to the maximum. We monitor ground water levels in and around our campuses. Around 35-60 percent of water used on our campuses is re-used.  We have also been able to cut per capita consumption on our campuses steadily by better maintenance, by smarter devices and more responsible usage.

I have not written the previous paragraph to tout our achievements, but to underline the limits of what we had done. In a sense, to talk about our failure and to draw a few key issues on sustainability.

Despite all our good work on water, a few years ago, one of our large campuses almost came to a halt because there was no water. In the summer, we are prepared for days of no water supply from the local civic bodies. This particular day, towards the end of summer, when we ran out of water, our ground water was down to inaccessible levels, the harvested water was long finished, and the civic supply was simply absent.

The final straw was when the operations of the commercial suppliers of water, who supply water in “tankers”, came to a stop on that particular day. We were frantic, with a few thousand people on the campus, most of the day still to go, and no water on campus.  As we investigated quickly, we realised what had happened.

There was a dharna by the local people on the roads leading to the river bed from which the commercial operators were sourcing the water. So the tankers were not able to access the river bed. The continuous drawing of water from that river bed, for commercial supplies, had affected the availability of water for the local population. Understandably, the people affected were deeply agitated.

For that day, we solved our problem. We located other commercial suppliers who were sourcing water from somewhere else. We also learnt a significant lesson. We realised that merely managing water better in and around our campuses was insufficient. It was equally important to monitor and keep track of whether our suppliers of water were sourcing water in a sustainable and responsible manner, whether they were damaging the water balance of wherever the water was being sourced from. We try to do this continually now, but you can imagine how hard this can be in our country.

Let me try to explore a few issues on sustainability that this incident points to.

First is the manifest importance of the issue of water scarcity, and the fact that its impact is underestimated by all of us. India is living through a water crisis, which will only get worse. Industrial use (and pollution) of water has had a significant role to play in this crisis; however, a bigger driver has been the way our agriculture sector has used ground water at shockingly unsustainable rates, encouraged by short-sighted policies. Thoughtless urban construction, which destroys natural water flow channels, has been another contributor. Population growth, with increasing urban concentration is raising the water burden manifold — with no real plan to deal with the future. Climate change will only make the situation worse over time. Climate change is, no doubt, one of the most complex challenges humanity is collectively facing, but in the present and immediate future, the water crisis is perhaps India’s biggest ecological issue directly impacting society.

Second is the fact that the problems and challenges of ecology, and therefore the need for sustainability, are not some distant mirages. These are not matters to be brushed aside, in some corporate “risk analysis” of the distant future. These are issues of here and now. In my view, those organisations that think of ecological issues as symbolised by the (in their view) unlikely rise of sea levels by a few meters in a 100 years, will be hurt by ecological risks of various kinds sooner rather than later. And then they may not be prepared to respond.

Third is the reality that the issues of sustainability are a complex mix of ecological and social dimensions. The interdependency is obvious, because ecology is directly impacted by economic activity and population. As an example, the social impact of the water crisis in India is immediate and hurts the underprivileged the most. We know that climate change will impact the developing countries more, and within them the already disadvantaged even more. Growth can be inclusive, only if it includes the environment.

Fourth is the notion of limits of responsibility. We thought we were responsible for managing water well, in and around our campuses. But the fact is that our water usage has an ecological footprint somewhere else, somewhere far away. We realised that and the importance of it in one day.

Not just because of this incident, but over time I have learnt that there can be no limits to one’s responsibility. In simple business and compliance terms, the boundaries of responsibilities are quite clearly defined. The next envelope of responsibility is defined by societal expectation, and often by those in the vanguard of societal issues.

But in my view, if one wants to be a leading organisation, one has to be able to go beyond even these societal expectations, and explore beyond. It’s not that one can always be successful in addressing issues that are so beyond one’s basic obligations, but sustained effort always makes a difference.

Why should one do this? Why should a business organisation do this?

My response to those questions can only be based on my (and Wipro’s) experience. Others will have to discover and explore their reasons.

About five years ago, we had an intense debate lasting a few months. What my colleagues and I were debating was the importance of the issue of ecology. We went through our own processes of exploration and discovery. Some of us even went back to basic science, reading and interacting with scientists methodically. Increasingly informed by this debate, I would validate the issues with leaders from all walks of life that I would meet.

In a few months, the debate ended. It became clear to us that the multiple issues of ecology will be some of the defining issues for humanity over the next few decades. Ecology and economy will be inextricably entwined. This would drive both risks and opportunities.  And so we decided to act — strategically and operationally — with ecology as a key driver and consideration. We decided to improve our ecological footprint, invest in related business opportunities and engage with different stakeholders on related issues.

Attempting to contribute and lead on this path clearly seemed the right and smart thing to do. Our deep conviction, arrived at after intense reflection, is the foundation for our actions. I can only suggest that everyone must conduct their own exploration to gain that conviction.

I cannot end without saying that I got (and stay) convinced that the issue of ecology is in equal measure an ethical issue. And I have realised in the past 40 years in business that whatever is ethical, whatever is right for society, is also eventually right and good for business e.g. Integrity.

(Wipro’s comprehensive Sustainability Initiatives can be viewed on Wipro.org )