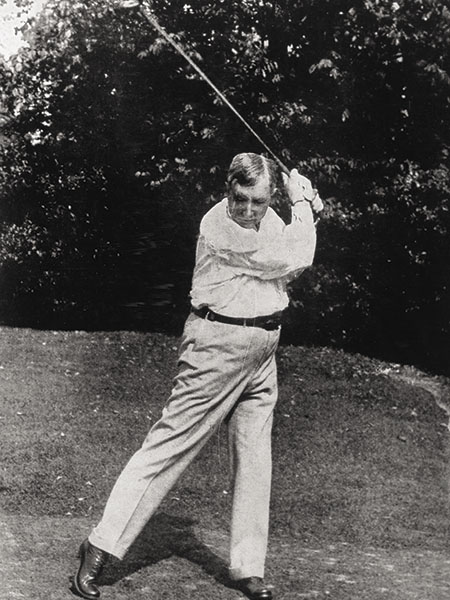 John D Rockefeller
Image: Time Life Pictures / Mansell / The Life Picture Collection / Getty Image
Forbes began publishing its annual Forbes 400 list of the wealthiest Americans in 1982, but the magazine started tracking the subject all the way back in 1918. The first-ever Forbes rich list, compiled by Bertie Charles Forbes [BC] himself, surveyed “the foremost bankers in the country” to find America’s 30 greatest fortunes—staggering sums, even by today’s standards.* 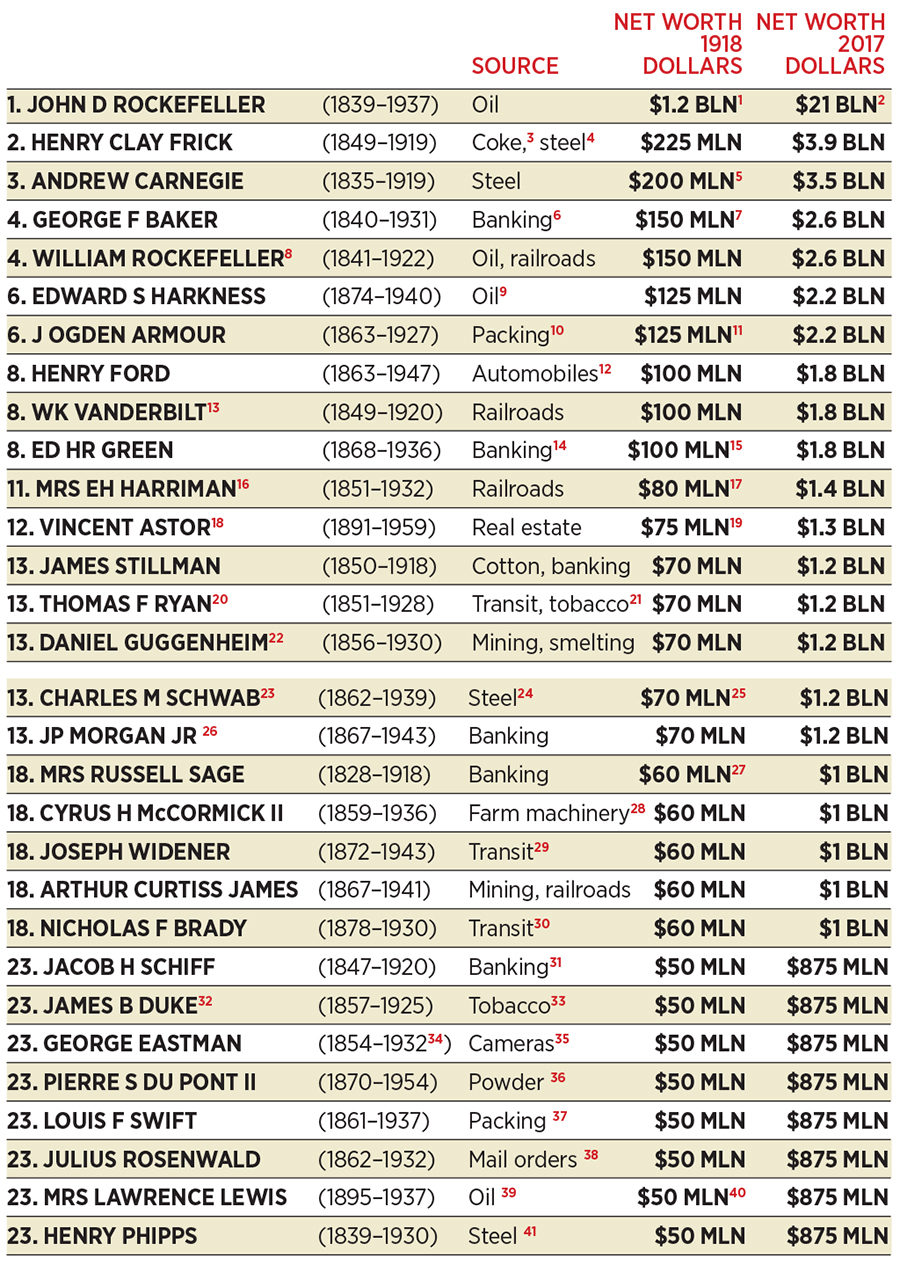 1  “Mr Rockefeller’s wealth,” BC Forbes wrote, “if it could be turned into cash and distributed equally—which it couldn’t—would give every man, woman and child in the United States $10 each.”

2  Rockefeller gave away more than $500 million during his lifetime (worth at least $8 billion today), but his heirs are still worth an estimated $11 billion.

3 Not either of your first two guesses: It’s the raw material used in steelmaking.

4 A longtime partner/frenemy of Carnegie; helped form US Steel in 1901.

5 Carnegie wrote The Gospel of Wealth—a precursor to Gates and Buffett’s Giving Pledge—preaching, “He who dies thus rich, dies disgraced.” He donated an estimated $350 million (worth at least $5 billion today) to charity during his life.

6 Baker rose from bank teller to president of the First National Bank but remained fairly unknown away from Wall Street. “You have never once seen George F Baker quoted in the newspapers,” BC Forbes noted. “His aversion to being interviewed is deeper than the Atlantic.”

7 Baker took $5 million in 1924 (worth $72 million today) and single-handedly funded the creation of the Harvard Business School.

10 He took over Chicago meatpacking firm Armour & Co upon his father’s death in 1901 and grew sales from $182 million to more than $1 billion.

11 A post-World War I slump, bad investments and really bad investments ($50 million worth of German marks) wiped out nearly all of Armour’s fortune by the time of his death.

12 “Mr Ford’s career is too well known to call for recapitulation,” BC Forbes wrote.

13 Grandson of Commodore Vanderbilt, he became the family patriarch in 1899 upon the death of older brother Cornelius II.

14 Son of ‘Witch of Wall Street’ Hetty Green, he grew up in cheap boarding houses thanks to his miserly millionaire mother’s fear of kidnapping and refusal to pay property taxes.

15 Green eventually inherited some of the fortune Hetty forged from frugal living and shrewd investments—and bought estates, yachts, automobiles and a private airport.

17 Harriman inherited $69 million when her railroad tycoon husband died in 1909.

19 When Astor made BC Forbes’s rich list, he was overseas, fighting in World War I. Astor joined the Navy in 1917, despite his father going down with the Titanic, and loaned the government his yacht for use as a warship.

20 The F stands, fittingly, for Fortune.

23 No relation to the other Charles Schwab, your broker.

24 Schwab rose from stake driver to president of Carnegie Steel, then US Steel, then Bethlehem Steel.

25 He lavished money on friends and family; died broke.

26 Son and spitting image of the JP Morgan

27 Margaret Olivia Slocum Sage inherited the $60 million when her husband, a notoriously close-fisted Wall Street financier, died in 1906; she spent the rest of her life giving the money to charity.

29 Widener’s father made a fortune in trolley cars; he, as owner of New York’s Belmont Park, was more into Thoroughbred racing.

31 A prominent investment banker, Schiff funded the railroad boom and the Japanese side of the Russo-Japanese War.

33 With about 90 percent of the market, Duke’s American Tobacco Co was the Standard Oil of cigarettes.

34  Suffering from a spinal disease, Eastman committed suicide in 1932. His note: “My work is done. Why wait?”

35  The man who made Instagram possible, Eastman’s affordable Kodak cameras brought photography to
the masses.

36   Explosives made the Du Ponts rich, but he helped transform the business into a diversified chemical giant; served as president of GM.

37  Swift’s father pioneered the use of the refrigerated railcar.

38 Mail-order millionaire Rosenwald bought into Sears & Roebuck in 1895 and grew it into what was once the world’s largest retailer.

40 Wall Street speculators got it wrong: Lewis was not her aunt’s principal heir. Instead, she received some Florida property plus $200,000 a year until age 40 and then $5 million outright. Impressive for 1918 but a fraction of what BC Forbes had estimated.

41  A partner and boyhood friend of Andrew Carnegie.

*Fortunes have been converted to 2017 dollars using CPI inflation adjustment; other methods—which apply a person’s share of his or her day’s economy to today’s much, much larger economy—yield higher estimates, including as much as $340 billion for John D Rockefeller.

Tweets by @forbesindia
Best of CEO Dialogues 2017: The Role of Family Businesses in a new India
100 years of Forbes: Survivors' gilt