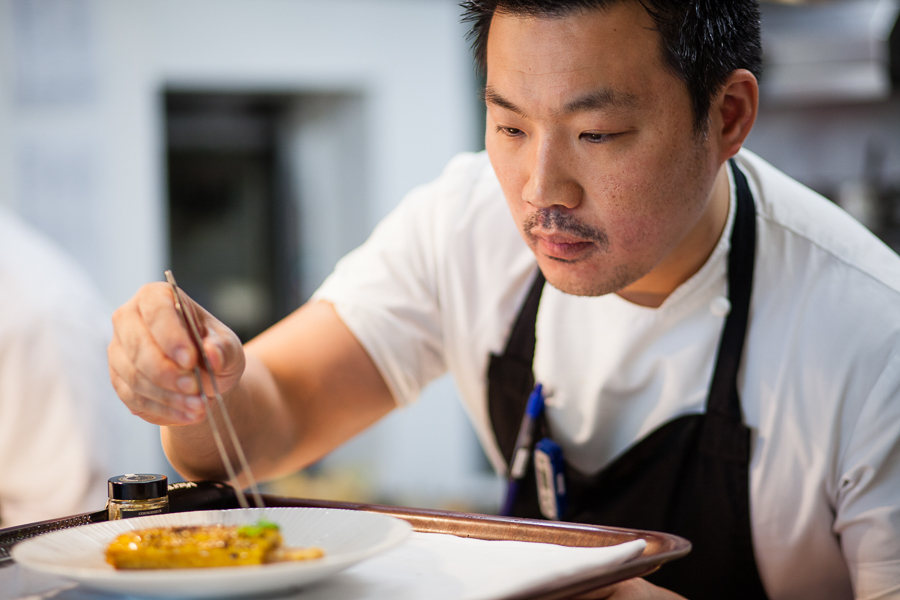 It is 9 am in London when chef Andrew Wong gets on the call. The chef, whose restaurant A. Wong earlier this year became the first Chinese restaurant outside Asia to win a second Michelin star, has a long day ahead. He and his team start making dim sums and 30-40 sauces including black bean, dry shrimp chilli, garlic sauces, in the morning which the chef will taste at 11. His guests start walking in by noon and the last one walks out by about 4 pm. At 4.30, Wong hits the gym for half an hour before coming back to the restaurant to start prepping for the evening service, followed by cleaning the kitchen, and getting home at 12.30. During both the services, Wong checks every plate before it goes out of the kitchen. The highest industry award speaks of the superior, avant-garde Chinese dishes, such as a prawn cracker the size of a plate, honey-baked pork puff pastry, chicken and lotus root dumplings, rabbit and carrot glutinous puffs, xiao long bao (soup dumplings), prawn wontons with garlic and chilli, which are served at his London restaurant and at Baoshuan at The Oberoi, New Delhi, where he is the mentor chef. The Michelin also rewards the lengths Wong goes to ensure that his restaurant serves the same, consistent experience to his customers day after day. “One half of the restaurant business is about innovation. We are constantly trying to improve the experience we offer our guests and the other half is to achieve that with consistency. That’s very important,” says Wong, 39. “The day-to-day actuality of creating consistency is one of routine,” he adds. 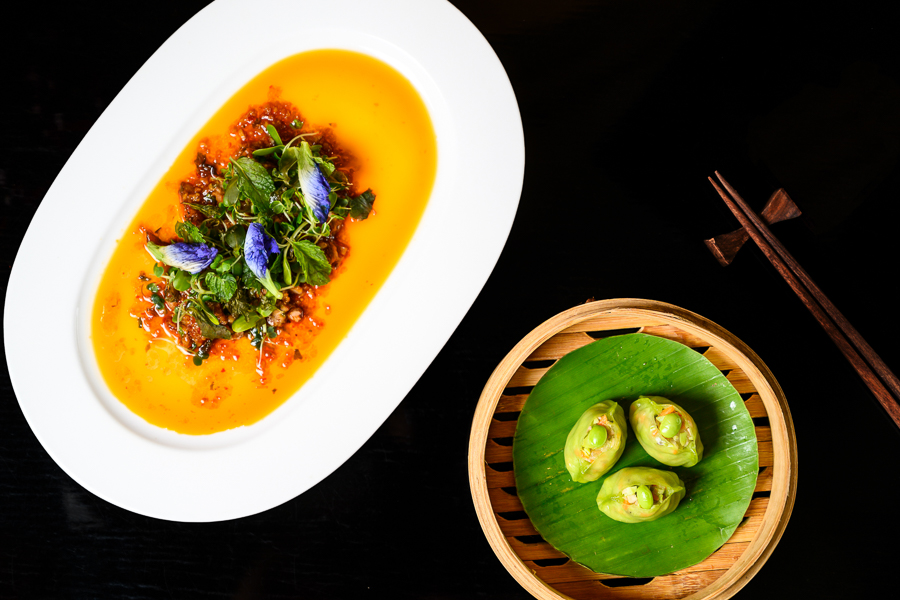 Wong, a chemistry graduate from Oxford University who went on to study social anthropology at the London School of Economics, was 22 when he decided to join the family Cantonese restaurant Kym’s in Pimlico in 2003. He joined a culinary course to learn cooking techniques and then went to China on a work tour. That is when he became curious about Chinese history and its varied culinary traditions. In 2012, Wong opened A. Wong (A pays homage to his parents Albert and Annie) along with his wife Nathalie, revolutionising Chinese food with great story telling, a mix of old and new cooking techniques and even molecular gastronomy, his menu encapsulating and celebrating historical recipes and techniques evolved over 4,000 years. In 2018 he became the mentor chef for Baoshuan at the Oberoi, evolving a menu that stays true to its origins and yet caters to Indian tastes. Where the Indian kitchen differs, he says, is in some of the ingredients used and Indian diners’ preferences. “The primary job of a chef is to use the experience and celebrate a style, a cuisine and a culture using the parameters of the ingredients around us and for the guests around us,” says Wong. Within the Delhi demographic, there is a certain love and affinity for chicken, saucier dishes and the tolerance for chilli is higher. Also, beef is not allowed, and pork isn’t preferred. Whereas in London, a lot of Wong’s dishes have pork. Vegetarian dishes are another focus area in India, which Wong says are also a massive part of Chinese gastronomy. “Many people in China follow Buddhism, which comes from India.” Interestingly, the chef has been referring to an old Chinese novel translated in English and titled Plum in the Golden Vase, as a source of inspiration to design vegetarian dishes. In the book, a woman creates a fuss as she thinks she has been served meat, but it is actually a vegetarian dish. “The idea of creating meat textures through non-meat ingredients has been a massive part of Chinese gastronomy,” says Wong, proving that Chinese food isn’t just about meats. He, however, thinks that India is a little behind in its acceptance of Chinese food than London. “Any culture takes time to evolve outside a diaspora. The very first Chinese restaurant in London was established in 1890 and the first in India was approximately 50 years later,” says Wong. Hence, London has more restaurants with regional diversity and diners there are a little more open to trying a wide spectrum of dishes from China. While India is catching on fast, it still has a lot of misconceptions about Chinese food, one being the idea of what is authentic Chinese. “I can tell you from an academic perspective that authenticity is an illusion. The innovation of today is the authenticity of tomorrow,” says Wong. “In India, people can be very attached to labels, pigeonholing things to this is authentic and this is not. This is Chinese and this is not so. At Baoshuan, this is the misconception we hope to change.” Education and constantly improving is something he is always working on, whether it be adopting his learnings from The Oberoi to London or vice versa. Even during the lockdown, Wong’s team would meet up once a week to discuss, plan and undergo different kinds of trainings on wines, cognacs, champagnes and, sometimes, something very different, like even how to select the right wood for a perfect bespoke table in the restaurant. “Education doesn’t have to always be 100 per cent transferrable to the environment of the restaurant. It has to be about stimulation and understanding that hospitality is so much more. It is about sentiment and heart.” The one important lesson that he learnt at the Oberoi, he says, is “the idea of absolute respect and humbleness towards the guests and to achieve it on a day-to-day basis in such a big setting is something I am trying to imbibe in my London restaurant as well.” 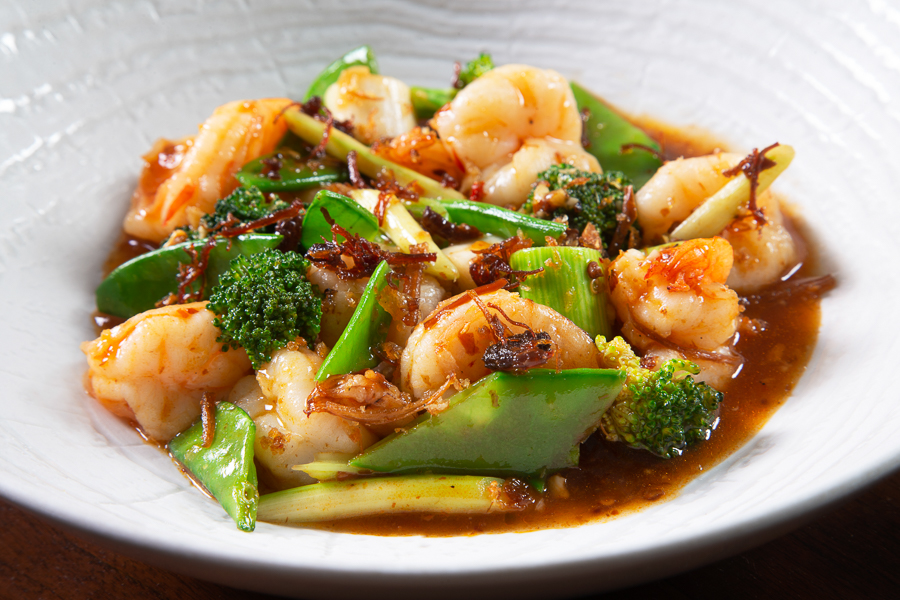 Guangdong Style Prawns in Hot Garlic Sauce served at Baoshuan at The Oberoi, New Delhi In another recent project, Wong collaborated with multimedia artist Gordon Cheung to bring “some happiness” to London, which has had three, prolonged lockdowns thus far. “The idea was to make the Chinese New Year, February 12, 2021, a focal point to move away from last year and move into a new year of more happiness and more prosperity,” says Wong. Cheung wrapped A. Wong in vinyl, which he painted with Chinese New Year designs and motifs and then AI-enabled it. When people put up their phones against it, they could see a virtual lion dance, considering there could be no such physical events this year. “This project gives people a little bit of understanding of the Chinese community in the UK and is also our way to thank the city for being so generous and accepting of the Chinese community.” During the lockdown, as a family-run restaurant closely associated with the hospitality community in London, Wong and his team also cooked and prepared thousands of boxes of food and distributed them to the needy. The initiative was started for A. Wong’s staff, which then expanded to young people in the hospitality sector who faced the prospect of no salaries. “As we went along, local churches, communities and other chefs across the UK joined hands with us to make this a nationwide project.” Ask him what has changed for him and his restaurant after the pandemic and what are the biggest trends in the global F&B industry today, and he says he doesn’t follow any. “Not that they are not important. They are, but I have always maintained that humbleness, the feeling of being cared for, and luxury are timeless, and I strive to achieve these,” says Wong. “When I say luxury, I don’t mean caviar and gold and diamonds. I mean the offering of a luxurious experience, which is heartfelt hospitality and that always has a place in any country.”

Tweets by @forbes_india
The only way Bharat can indeed become 'Mahaan' is through economic performance: NR Narayana Murthy at FILA 2021
Dunzo's Kabeer Biswas Unplugged: Some food for thought, lots of food talk