How Covid-19 is impacting wildlife conservation

With tourism funds drying up, wildlife conservation, and the people who depend on it, are facing a crisis 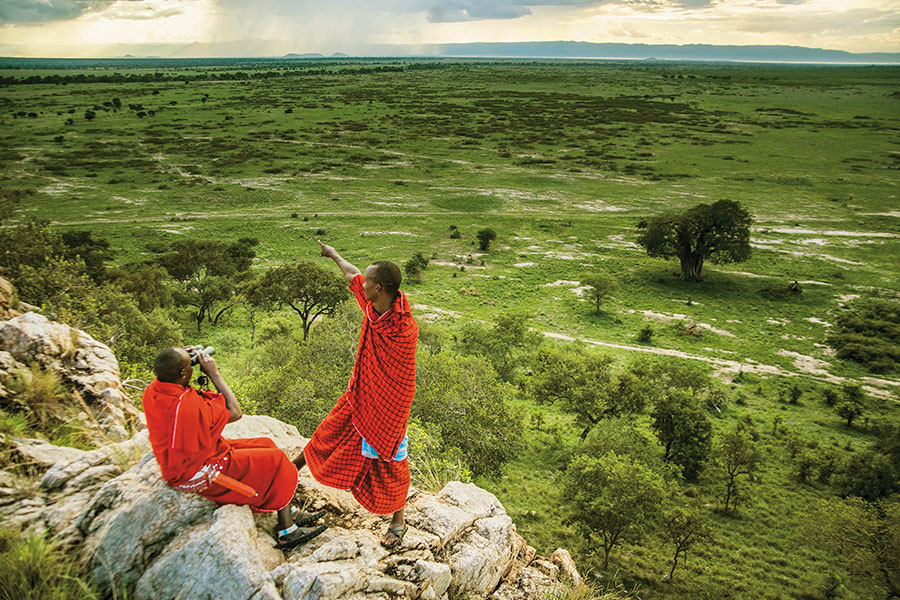 Maasai tribesmen at Randilen—a community owned by the Wildlife Management Area in Tanzania. They conserve land and wildlife, and depend on it for survival
Image: Roshni Lohia/TNC

In August, the Great Migration, one of the largest movements of terrestrial animals on Earth, took place in East Africa, as it has for hundreds of years. A prized sighting, and one that draws large crowds, was different this year—Africa’s biggest wildlife event played out with no spectators. The animals probably did not miss the audience, but the lack of tourists, and the money they bring in, was definitely missed by conservationists and local communities.

In an April 2020 blogpost on undp.org, Midori Praxton, head of Ecosystems and Biodiversity, United Nations Development Programme, writes, “Tourism may sound rather frivolous. Wildlife tourism fringe-frivolous! But statistics indicate that it is in fact one of the most influential and world-shaping of human industries.”

According to a 2018 study conducted by the World Travel & Tourism Council, the total economic contribution of wildlife tourism amounted to $343.6 billion. The industry supports 21.8 million jobs, equivalent to the population of Sri Lanka. When the industry comes to a grinding halt, as it has this year, it puts both the wildlife and the communities that depend on it at risk.

“Tourism is like a payment for an ecosystem service. The ability to manage and fund wildlife comes from the people who appreciate coming out and seeing the animals,” says Matthew Brown, Africa director, The Nature Conservancy (TNC), a global environmental non-profit organisation based in the US. “When domestic or foreign tourists spend a night in a national park in a private or community-owned conservation area, a percentage of their bed fees goes towards conservation. The money is used to pay rangers’ salaries, pave roads as well as fund a number of community projects.” A report published this July by the European Commission says Covid-19 has led to a steep decline in business for operators in Africa’s protected areas: On average 61 percent fewer customers, coupled with a substantial drop in future booking requests, 82 percent, on average.

The pandemic has far reaching effects and we are still in the early stages.

The decline in tourism and drop in revenue have resulted in job losses and degradation of natural habitats. “Across Africa, roughly 50 to 80 percent of each conservation area’s budget comes from tourism,” says Brown. “Very few conservation areas have alternative income streams. In Tanzania, most of the revenue to manage conservation across the country’s 22 national parks is funded by tourism. There’s been a lot of encroachment into protected areas, with people going in to cut trees to make charcoal. This would not be happening if there was better security or tourism presence. Every single safari vehicle that criss-crosses the national parks has people with smartphones sharing videos and photos. Those are valuable eyes and ears on the ground and they matter.”

One positive fallout of pandemic-induced park closures, tightened border restrictions and increased vigilance at entry and exit points has been the impact on trafficking of live animals and their body parts across countries. But, according to a report published by the Wildlife Justice Commission, an organisation that works towards eradicating wildlife trafficking, these Covid-19 related measures may temporarily restrict illicit trade by default but are unlikely to last long. 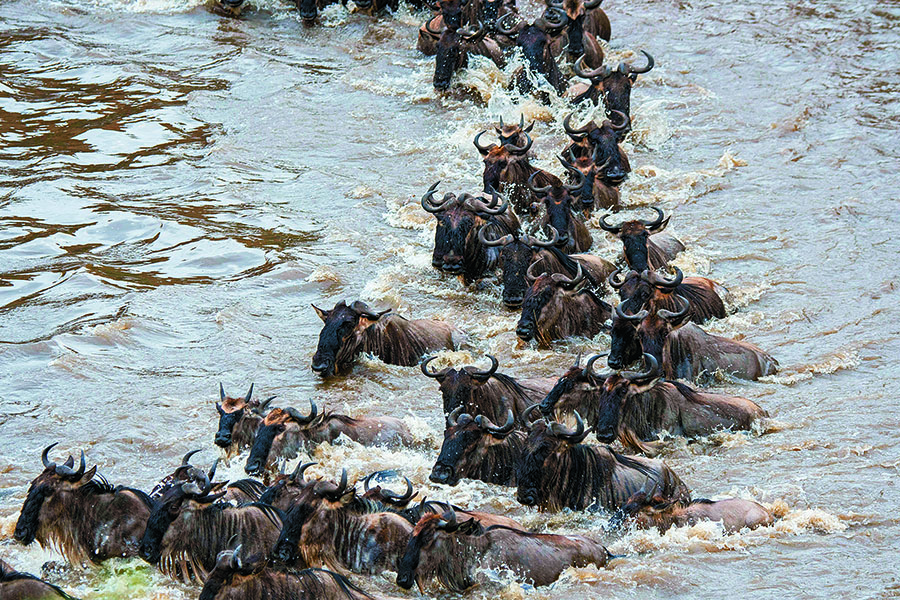 “In Kenya, giraffe meat is being sold in the market; it was rarely seen before. This indicates a slump in the economy,” says Brown. From January to May, Kenya Wildlife Service has recorded a 51.4 percent increase in bushmeat poaching cases, with 2.8 tonnes recovered compared to 1.8 tonnes in the same months in 2019. The Uganda Wildlife Authority has recorded a 125 percent increase in wildlife crime cases between February and May 2020, mostly of suspects found with bushmeat. “Neither country traditionally eats wild meat, unless times are hard and there’s no other way to either feed your family or make ends meet,” adds Brown.

Besides a decrease in tourism, the overall economic meltdown that’s crippling economies around the world is also mounting pressure on wildlife. Kenya is one of the largest exporters of cut flowers to Europe. “With a slump in demand, nearly 7,000 people have lost jobs in areas surrounding a black rhino reserve in northern Kenya. These are people living and walking by high-value wildlife such as white and black rhinos and elephants. The potential for poaching is higher, and the ability to control it is lower,” worries Brown.

In the long term, Brown is concerned about how tour companies—both big and small—will bounce back. “Companies may survive a 12-month lull in business, but anything more is going to be difficult,” he says. TNC has launched a three-phase response to the crisis. The first is setting up an emergency fund that provides money to critical areas. Under this programme, the jobs of 950 rangers have been maintained across four countries, which would otherwise have been lost. The second phase is to provide low-cost tourism packages as a stimulus to the industry. The third phase is to focus on diversification. In Kenya, TNC is working with local partners to help communities expand livestock farming, bead-making as well as develop carbon financing for improved grass management.

The pandemic has also impacted conservation efforts across oceans and waterbodies. “For the last 30 years, TNC has worked with governments, local communities and private organisations in Komodo National Park and Raja Ampat in Indonesia to develop models of eco tourism. Through a resort and dive-boat operations, these initiatives have helped anchor and stabilise sustainable coastal resource management,” says Mark Zimring, director, Large Scale Fisheries Program at TNC. “Before these parks were formed, there was a long history of blast fishing that was practiced in these parts. Thirty years on, the effects of these damages can still be seen.” He adds that the conservation model has worked incredibly well, but it’s predominantly based on tourism. There are many coastal communities primarily dependent on these operations, that are now at risk with zero income.

For instance, The Grand Komodo, a tour operator and owner of a lodge and dive-boat operations in Bali, Indonesia, had 870 visitors in 2018, 816 in 2019 and only 120 in 2020. TNC, through its Indonesia partner, Yayasan Konservasi Alam Nusantara, is working with them, helping them bridge the income gap by supporting operations that are critical, as well as the communities that are deeply committed to conservation.

Zimring worries that significant damage can be done in the absence of adequate monitoring, much of which has historically been done informally by ecotourism operators. “We don’t have eyes and ears out on the water today. It’s almost like we are blind,” he says. Reports of poaching activities have started trickling in. “As the crisis goes on, the resorts and eco tourism operators have the ability to withstand cancellations for a few months, but not for years.”

Unlike in Africa, conservation in India is on relatively safer ground as it is funded by the government. “Tourism and conservation have never been good bedfellows. It’s only recently that the idea that tourism could be a powerful tool for conservation has taken hope,” says Belinda Wright, executive director, Wildlife Protection Society of India. Her concern is about the tribal communities that live on the fringes of the national parks and who depend on the forest for sustenance, and who earn from tourism-related activities. “These communities have few other forms of income. They earn from maintaining roads, providing entertainment for guests at the lodges, and selling handicrafts. A drop in visitor numbers has certainly impacted them in a big way.”

A decline in tourism, coupled with an overall slowdown, has had a ripple effect. “The fallout of the pandemic hasn’t been nearly as bad in India as it has been in Africa, since we have a protection system in place. But local poaching of wild boar and deer has increased, as has timber felling and human-animal conflicts in buffer zones,” says Wright.

Kedar Gore, director, The Corbett Foundation, says, “Tiger reserves are hubs of wildlife tourism in India. Over the years, several villages around the gates of the national parks have shifted to a tourism-based economy. Wildlife tourism brought with it a big upgrade to the lives of these villagers. This year, since the lockdowns began in March, there’s been a loss of 100 percent income. Although parks have now reopened in most parts of the country, the deficit in the number of tourists will make a big dent to the lifestyle of these villagers, and push them to find alternative means of income. This has resulted in growing dependence on forests for collection of firewood, bamboo and even bushmeat.”

Malika Virdi, the sarpanch of Sarmoli Jainti Van Panchayat in Uttarakhand, has worked tirelessly over the last 16 years to marry conservation and tourism. Like Brown, she believes that when people earn from the forest, they regulate their use of the forest and focus on conservation. “It takes time and considerable effort to bring about a change in behaviour, to get people who are hunters to turn to protection. With the pandemic, people have fallen back on their age-old dependence on forests,” she says. If unchecked, this could be catastrophic. Further, with more people venturing into the forests, chances of human-animal conflicts are higher.

In the Bandhavgarh Tiger Reserve in Madhya Pradesh, one of India’s prime tiger territories, there have been six tiger deaths in six months. The most recent ones were of a tigress and one of her cubs, and they have been identified as poisoning cases.

The immediate concern is about ensuring conservation projects remain on track and get the funding they need, while in the longer run it’s vital that the gains aren’t lost. Prerna Singh Bindra, writer and conservationist, says, “Several young people from local communities have become guides and naturalists, and this is a strong message, that wildlife can give you a livelihood. They have made being involved with wildlife aspirational, building community support for conservation. The current period of uncertainty, when no one knows when tourists will return, is putting a lot of people out of work.” The hard work done to build community involvement over the years could be wiped out. “We need to work with such vulnerable people to provide safety nets,” she adds.

The pandemic has been a wake-up call, but one that was bound to happen. “Black swan events like Covid-19 are becoming more and more common and are forcing us to grapple with how we are going to insulate both the communities and eco tourism operations that support them from such disruptions. We need to think about how we build resilience in the face of more crises to come,” says Zimring.

Tweets by @forbes_india
Capital Ideas: Haigreve Khaitan on how a self reliant India will only boost foreign investments
How Steve Bannon and a Chinese billionaire created a right-wing Coronavirus media sensation