Long thought to be simple fare, Kokni Muslim cuisine's unique flavours and aromas are slowly wafting out of the confines of home kitchens 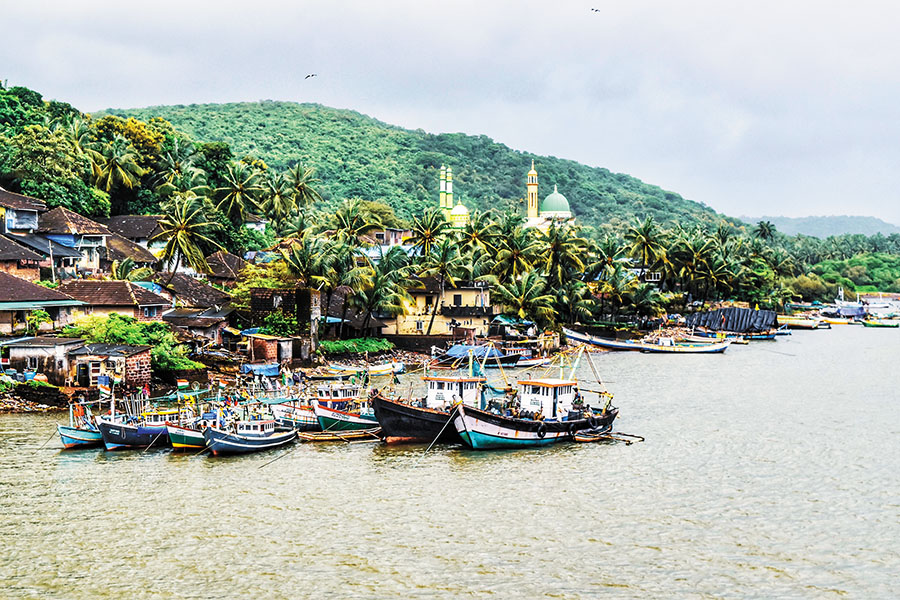 The Konkan coast, which is home to the Kokni Muslim cuisine

When you think of Muslim cuisine, what do you think of? Hyderabadi dum biryani, Lucknowi galouti kebab on a warqi paratha, or the lavish Bohri thaal? Dishes such as yakhni gosht (dry mutton), machli cha halduni (fish gravy), dum che Bombil (Bombay Duck made in the dum technique) are not the ones that readily come to mind as most of us are unfamiliar with the cuisine of the Kokni Muslim community.

What has kept this cuisine away from public knowledge is that it cannot be found at just about any restaurant and can be sampled only at home-dining experiences or pop-ups, that too only over the past couple of years.

One such is Ammeez Kitchen, a home-dining service on weekends at Marol, Mumbai, founded by Shabana Salauddin in 2017. “Ammeez Kitchen happened over a conversation with my mother, Ammee, while having our meal,” she recalls. “The discussion hovered around why Kokni Muslim food, which is so delectable, is unknown compared to other regional cuisines? Ammee dismissed the idea, saying our food is just ‘ghar ka khaana [simple home food]’. This strengthened my resolve, as I felt this was exactly what I wanted to showcase.”

Kokni Muslims are a sub-ethnic group from the Konkan region, including the areas of Thane, Raigad, Ratnagiri and Sindhudurg. About 1,000 years ago, trade between the Indian sub-continent and West Asia saw Arab merchants coming to this region—to ports such as Chaul, near Alibaug—and, over centuries, settling along the coast, marrying into the local communities and giving rise to the Kokni Muslim community of seafarers. The Arabs brought along with them the knowledge of food such as yakhni or mutton dishes, and spices such as fennel. Besides, owing to their location, seafood became an integral part of their cuisine along with local, Maharashtrian influences.

Nujmoonnisa Parker, author of Kokni Delights (a book of recipes and history of the community) and an exponent of Kokni Muslim cuisine, explains, “The backbone of Kokni Muslim cuisine has always been what is harvested from the ground, i.e. local produce. Like the cuisine of the Goud Saraswats of Konkan and Christians in Goa, Kokni Muslim cuisine is largely dairy-free, and, in this respect, differs from the Mughlai cuisine. There are various permutations of any given recipe, based on the region, availability of ingredients and seasonality. Coconut, rice, lentils, onions, potatoes and red chilies are the main ingredients of this cuisine.”

Although a myriad spices and ingredients go into each dish, according to Shahida Khan, a Kokni Muslim from Navi Mumbai, the food is light on the stomach. “Kokum, dry mango, black sesame seeds, coconut, red chilies, turmeric—all grown in the region—are used in our cuisine. Rice, which is also common, is used in whole or powdered form in almost every dish.” 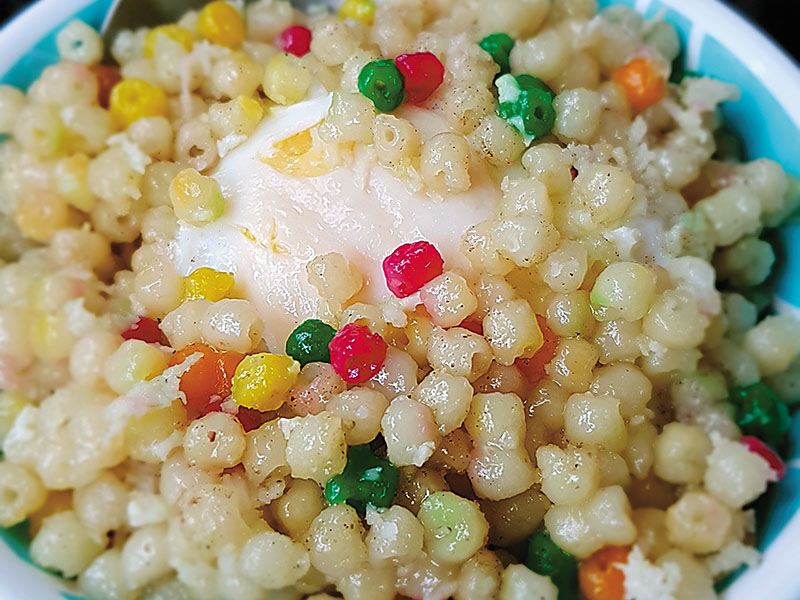 The cuisine has similarities with other Konkan cuisines and yet remains distinct. Mumbai-based home chef-turned-entrepreneur Mumtaz Kazi Pawaskar, who hails from the fishing village of Harnai in Ratnagiri and runs a catering business along with her cousin Sameera Gawandi, elaborates: “We call ourselves Kokni and not Konkani. The use of coconut milk as in other Konkan cuisines is common. But we use it instead of water to make curries, and this is one such distinction of Kokni food. So much so, that coconut milk is even used to cook rice, which gives it a glaze and extra flavour.”

Pawaskar adds that the cuisine has three broad spice combinations: Fish masala, mutton masala, and haldi (a combination of turmeric and fennel ground together). Fennel, a key ingredient of Kokni cuisine, is an example of the Arab influences. “Isan is the process of adding a few prawns to some vegetable preparations like stuffed brinjals, a yellow curry with drumsticks, and yam in garam masala for extra flavour,” she explains. “In our village, during summer, all household courtyards have whole red chillies drying in the sun, while households make and store spice mixtures for the whole year.”

Each meal has some special dishes. “Ghavne and sandan are breakfast dishes made with rice flour and a bit of jaggery. While ghavne [delicate crepes] is made on a tawa with pure ghee, sandan [similar to the Goan sanna] is steamed and is lighter in texture,” Khan explains. “Ghario, on the other hand, is an evening snack made with shredded cucumber, jaggery and rice flour, deep fried and typically served with Sulaimani chai.”

Cooking methods and ingredients vary from village to village, according to Salauddin. “Every family has their own version of the recipe. Most of the Kokni families have at least one clay pot or degh in which machli ki halduni and kalsani ka saalan (fish gravy) are prepared. The wet spice mixture—coriander, chillies and garlic—is always freshly ground. There are two extremes in our cooking: An entire meal can be fixed in 30 to 45 minutes, while others that include sandan (like idlis, made of coarse rice, coconut, milk, sugar and steamed), roath (semolina-based cake), khichda (slow-cooked meat and lentils), sarole or saravale (wheat pasta), bhakorche (like rotis), and ukdi ke kanole (rice dumplings) are laborious.” 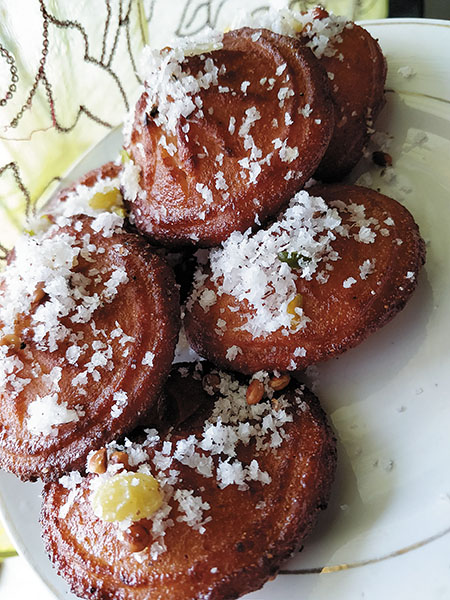 
Desserts occupy an important place in this cuisine. Pelve are rice flour crepes stuffed with grated coconut and jaggery and garnished with chironji, a variety of nut. Poppy seeds are used abundantly to garnish sweet dishes like mitli (made of rice flour and coconut), peyushi (coconut milk and cashew pudding), duderi (flour and egg pudding), chonge (sweet puris) and seviya (vermicelli in milk).

Although Kokni Muslims have traditionally cooked and enjoyed their own cuisine at home, Parker feels that in the last few decades the community has learnt to incorporate various styles of cooking into their kitchens.

Saravle, a pasta made from wheat dough moulded into tiny rings, is a favourite in this cuisine. It plays a significant role in weddings as it is part of a bride’s ‘rukhwat’ (gifts) when she leaves her parents’ home. It is cooked as a savoury dish with mutton or chicken, or as a sweet when steamed and topped with eggs.

Salauddin says, “Ukdi ke kanole, small half moon-shaped rice dumplings stuffed with freshly grated coconut, sugar and nuts, are prepared on the wedding day. These piping hot dumplings are bought in a big plate and placed in front of the couple. The groom is expected to pick up the maximum number of dumplings and gift them to the bride. The belief is that the larger the number of dumplings he picks, the more likely he is to take care of his wife.”

Religious occasions, too, call for special dishes being prepared at home. “Women prepare sandan on Ramadan Eid, and roath and malido in the first week of Muharram,” says Parker.

Until recently, Kokni Muslim food had remained restricted to homes and was not considered to be a cuisine that could be popularised beyond the community. However, many women are now making an effort to help more people become aware of their rich culinary heritage through pop-ups and curated home-dining experiences.

Since 2017, Pawaskar and Gawandi have been delivering food from their home under the name of Kokni Dastarkhwan, and have joined hands with Authentic Cook, an organisation that offers unique culinary experiences hosted by home chefs. For instance, in 2019, Neel, a popular Mughlai and North Indian cuisine restaurant with branches in Mumbai’s Mahalaxmi and Powai held a Kokni Muslim cuisine pop-up with Pawaskar and Gawandi.

Salauddin’s Ammeez Kitchen offers home dining experiences on weekends, where customers can reserve their seats in advance, and also delivers Kokni Muslim fare to the homes of customers. “Most Kokni Muslims now live in nuclear families, and with the busy lives we lead we all prefer to have quick-fix meals rather than our own cuisine, which can be quite elaborate. Families have either stopped making these dishes, or are unaware of old recipes made by our grandparents,” laments Salauddin. “This is why the transfer of knowledge from one generation to another is at a standstill. While we Koknis love our food, we have always undervalued it. It is confined within the walls of our kitchens. It is now time to let the world know.”


Show More
Thank you for your comment, we value your opinion and the time you took to write to us!
Comments 3

Tweets by @forbes_india
Information Technology: The vital cog in the wheel of digital transformation
Ten interesting things we read this week