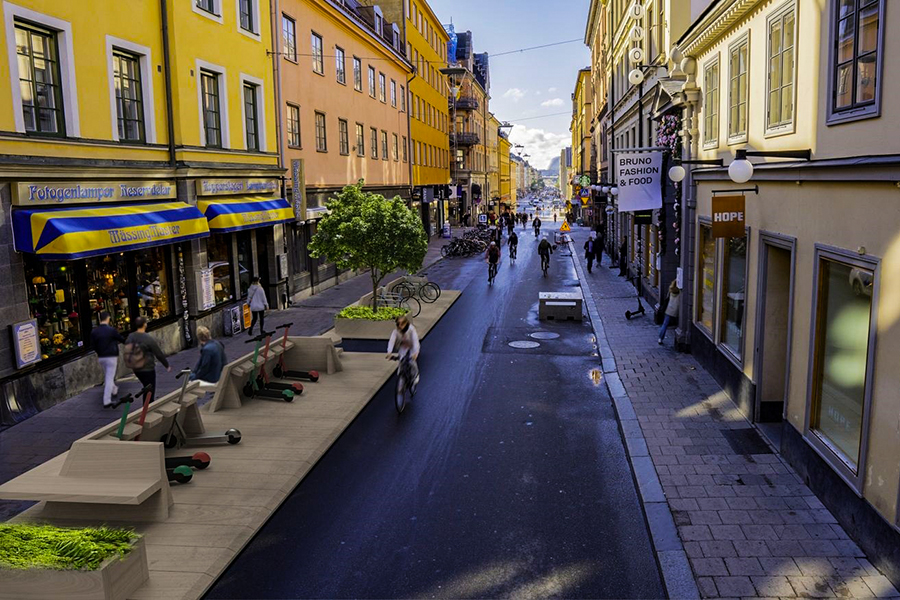 The one-minute city is an experimental urban model that is currently being tested in Stockholm. Based on the idea of the 15-minute city, the concept reimagines urban space at a hyper-local level and involves the citizen in their environment.

Just as we were getting used to the concept of the 15-minute city, now Swedes are experimenting with the one-minute city. Unlike the 15-minute city, the idea here is not to meet all the needs of a community within a one-minute radius. Rather, it is to give the inhabitants of a neighborhood, or even a street, the choice of how to use the urban space.

"The one-minute city is loosely described by the space outside your front door—and that of your neighbors adjacent and opposite," writes Dan Hill, designer and urbaniste at Vinnova (Swedish government innovation agency), "suggesting numerous tight circles of engagement overlapping in the street, around your block or house."

In short, the idea is to give a space with multiple potential uses to the inhabitants who live in the district, by building wooden modules, with various sections. It is up to them to decide, according to their needs and desires, the form that these wooden modules will take. A green space, a meeting place, a playground for children, a parking lot for bicycles or scooters, the possibilities are endless.

In the coming years, these types of street spaces will multiply in urbanized areas, taking the place of parking spots, which are destined to disappear from the landscape. Since the pandemic and its lockdowns, there has been a growing impetus to improve one's quality of life on a neighborhood scale and to have infrastructure at a very local level.

This model of the city of the minute is also in line with another movement very much in the zeitgeist: the involvement of the citizen. Each resident can take part in the process of restructuring their street. This concept involves the collaboration of local residents and designers to bring projects to life through workshops and community consultations.

"Everyday infrastructures like streets hold the keys to our possible cultures," outlines the designer Dan Hill, for whom, reinjecting social and green elements into these spaces contributes to new forms of democracy.

The one-minute city is currently being tested in four sites around Stockholm. The project is expected to be rolled out across the country by 2030.

Tweets by @forbesindia
The pandemic encouraged people to get into riding, a trend that is good for the industry: Ducati India MD
Lucasfilm hires YouTube artist behind 'Star Wars' deepfake