The Lalbhai brothers spin a new yarn at Arvind

From ecommerce to material science, the fifth generation leaders of the Lalbhai family are developing a whole new range of businesses and laying the foundations of Arvind 3.0 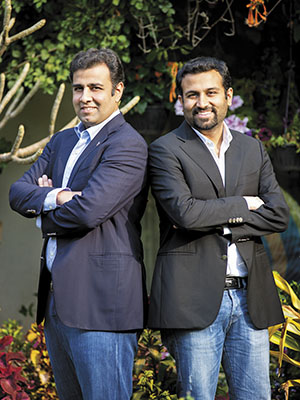 Thirty three-year-old Punit Lalbhai has trained to be an ornithologist. Nature, ecology and conservation are subjects dear to him. This is evident from his academic credentials: A bachelor’s degree in conservation biology from the University of California, Davis, and a master’s degree in environmental science from Yale University.

“Ornithology is still a passion. I was pursuing it through academics and I didn’t see a direct way [of using it] to influence things,” says Punit, who has donned the hat of a businessman. After all, he is the elder son of India’s textile mogul Sanjay Lalbhai. “Rather than just studying birds, I build sustainable businesses that have the ability to impact ecology and conservation in a positive way,” says Punit.

His younger brother Kulin, 30, is passionate about how best he can serve consumers. When he was in the ninth grade, he had interned at the textiles-to-brands company Arvind Limited (then known as Arvind Mills). “I’ve been quite clued in and connected to Arvind’s consumer side from a young age,” admits Kulin, who has a master’s degree in business administration from the Harvard Business School and a bachelor’s degree in science (electrical engineering) from Stanford University.

Punit and Kulin, executive directors on the board of Arvind Limited, are spearheading new growth verticals within the company, each of which are slated to become billion-dollar businesses in the future. While Punit’s focus areas are advanced materials (such as flame-resistant apparel), engineering (waste water treatment) and agribusiness (related to growing cotton), Kulin is driving Arvind’s entry into the world of ecommerce.

“Both of them are trying to lay the foundations for Arvind 3.0. Their father Sanjay laid the foundation of Arvind 2.0, which saw the company’s business expand from denim to multiple other categories,” says Arvind Singhal, chairman, Technopak, India’s leading retail, textile and apparel consulting firm. “Punit is looking at applications of textiles, beyond the conventional apparel applications, popularly known as technical textiles. Kulin has a much sharper focus on brands, retailing and ecommerce. The brothers have taken completely different directions, so they aren’t coming in each other’s way.”

With an installed capacity of 110 million metres per annum, Arvind Limited is among the largest producers of denim globally. In 1984, the Ahmedabad-based textile house gave India its first homegrown denim brand Flying Machine, which became a market leader in the branded denim wear segment. The company is also credited with bringing to India global fashion brands such as Arrow, US Polo Assn. and Tommy Hilfiger over the last two decades and, more recently, GAP. It also diversified into retailing in a big way with the launch of multiple retail store formats (The Arvind Store in 2009-10) and revamping its value retail store Megamart, which was first launched in 1994-95.

Currently, the core textile business—which is largely a business-to-business play and includes denims, woven fabrics and garments—rakes in about 60 percent of the company’s $1 billion revenue. The brands and retail businesses together constitute about 33 percent and it is the growth of these two verticals that has redefined Arvind Limited over the last decade.

For the future, Sanjay Lalbhai’s sons have a vision for Arvind. Punit and Kulin speak of a conglomerate that will be aligned to the changes that the Indian economy is undergoing. “Ecommerce is changing the way people shop. Material science is going to be a strong pillar in how the country is going to grow and fulfil its infrastructure, transport, human safety and environmental safety requirements. And we are trying to build a portfolio of businesses that are catering to that future,” says Punit, who first formally joined Arvind as a management trainee in 2006-07. In 2010, he left to pursue an MBA from Insead, France, and a year later, he returned to join Arvind as executive director.

Of the three business verticals Punit oversees, advanced materials, which uses textile technology to diversify in the field of material science, is the largest. Under this, Arvind has specialised businesses catering to personal protection: Anti-ballistic or bulletproof apparel, antistatic garments and high-visibility clothing. Its clients include India’s armed forces and companies such as Reliance Industries and the Tata Group.

That apart, Punit is quick to talk about his efforts in building sustainable businesses. “We are trying to make industrial processes more environment friendly through waste water treatment, recycling and by offering zero liquid discharge solutions. We have about 22 patents for our zero-liquid discharge technology,” he says.

Both the advanced materials and water treatment businesses are relatively new verticals, set up around five years ago. They contribute about Rs 700 crore in revenue, according to Punit. “In the next couple of years, advanced materials alone would be a Rs 1,000-crore business,” he says. “We are trying to build differentiated billion-dollar businesses.”

For Kulin too, the goal is to create a billion-dollar business, but his digital drive is more aligned to Arvind’s existing brand and retail business. In 2014, Arvind Internet Limited (AIL) was set up as a subsidiary of Arvind Limited. It marked the 85-year-old textile company’s foray into the new age ecommerce space. Led by Kulin, AIL is touted as being a startup within Arvind.

Kulin’s analogy is: AIL is a startup which has its own culture, people, processes and Arvind Limited is like the venture capital firm investing in the growth of AIL. The only difference is, he says, “We are not after gross merchandise volumes (or GMV, a term used by online retailers to quantify sales through their platform in a specific time period). We are not going to burn Rs 1,000 crore to make Rs 1,000 crore.”

AIL, in 2014, launched its first venture—an online custom clothing brand Creyate, which was, and still is, pegged to be an alternative to ready-to-wear clothing. Through Creyate, consumers can get to tailor-fit their garments on a 3D visualisation platform, which would then be factory made. “It’s a niche boutique concept. But what we are launching in March-April this year is a much large-scale model, which would be integrated with Arvind’s brands and retail business,” says Kulin, who has shifted base from Ahmedabad to Bengaluru.

Bengaluru is my “new temporary home”, says Kulin, who formally joined the company in 2007 and was the driving force in setting up Arvind Store, which retails fabrics, ready-to-wear fashion, and also offers custom tailoring. Later, in 2012, he was inducted into the company’s board as executive director. “I’ve shifted to see through the launch of our digital foray. It’s a very big bet that the company is making and it requires hands-on team building.” Also, Arvind’s brands and retail business is being spearheaded from Bengaluru.

Without revealing too much about AIL’s new ecommerce venture, Kulin says the focus would be on omni-channel retail for its existing ready-to-wear brand offerings. “With 35 of India’s favourite brands and 1,100 stores across the country, we are very uniquely positioned to bring omni-channel retail into India in an exciting way,” he says. According to him, if Arvind is able to converge the online and offline journeys of consumers, it could deliver a more powerful value proposition. By the end of this decade, Arvind’s brands and retail businesses would garner $1 billion in revenue, and Kulin wants his online venture to account for 10-15 percent of that.

Sanjay Lalbhai, 61, chairman and managing director of Arvind Limited, was unavailable for comment. Also, as a policy, Arvind does not allow its executives to comment on family matters. But this much is known: Sanjay Lalbhai, the fourth generation of business leaders from the Lalbhai family, saw Arvind Limited stare at bankruptcy due to the accumulation of massive debts in the 1990s. He steered the company out of its troubles with his grit and determination.

Even though he is still at the helm, the question of succession at Arvind lingers heavy in the air. The brothers share a similar opinion: They (the family) would always put the business first and who manages the business is a secondary question. “We are both happy doing what we are doing and will fit into roles that the board and management decide,” says Punit.

On a more philosophical note, Kulin says, “This is not a world where things come to you because of your birthright or surname. Things should come to you because you are the best person to be doing it.” And the two brothers are putting heart and soul into the business to prove that they are worthy successors.


Change Quotient
Arvind Limited, synonymous with denim, textile manufacturing, is walking down a new path with its next generation of leaders—brothers Punit and Kulin Lalbhai. They are creating the company’s next billion-dollar businesses from verticals as diverse as advanced materials and ecommerce