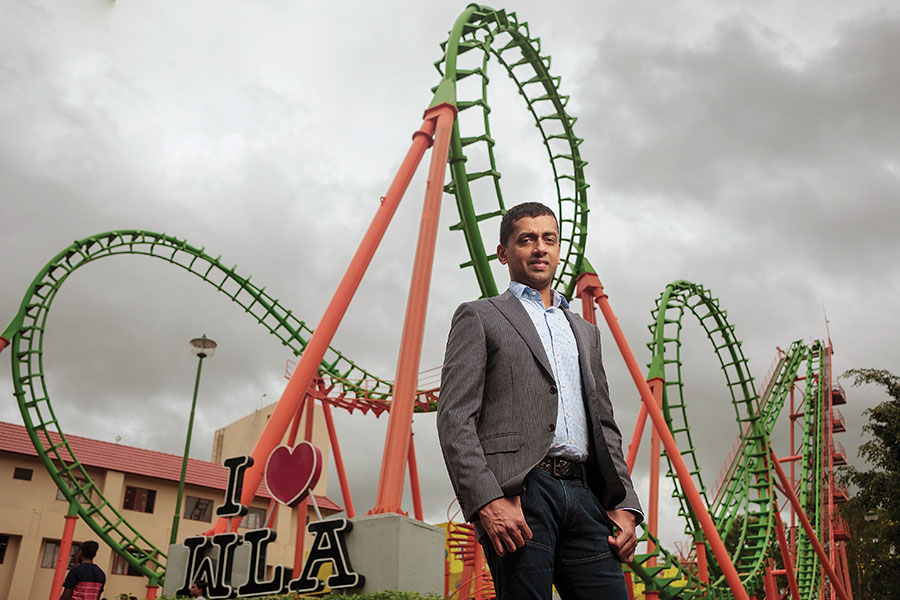 Arun Chittilappilly loves amusement parks. He makes it a point to go to three or four of them around the world every year. He has his favourite parks—Tokyo DisneySea in Japan, Universal’s Islands of Adventure in Orlando, US, Alton Towers in England, and Europa-Park in Germany—and his favourite rides. “He may well be the only person in India to visit the highest number of amusement parks around the world,” says his father Kochouseph Chittilappilly. And no, that’s not a complaint. For Arun is the 39-year-old managing director of Wonderla Holidays, which runs the Wonderla chain of amusement parks, India’s most profitable company in the sector. 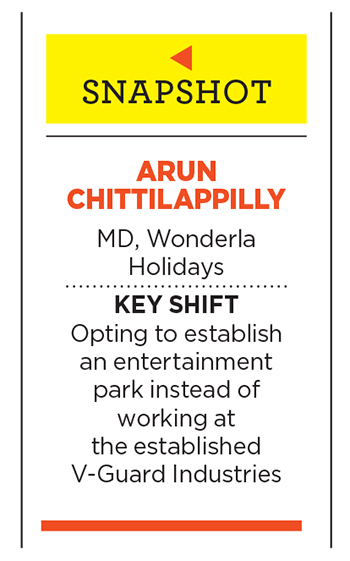 However, despite travelling the world in search of new rides on which to scream your lungs out, Arun’s most expensive splurge was actually made at home. Mission Interstellar, at Hyderabad’s Wonderla, is a virtual reality-based five-minute space-themed ride that can seat 60 people. It was designed in India by Wonderla engineers. “We imported the machines from Italy and got a Hollywood studio to make the movie for the ride,” says Arun. It cost about ₹40 crore.

In a country that has seen middle-class incomes rise, and urban outdoor activities fall, entertainment parks are where families can go for a day of fun. “What do we do when we want to step out of the house? The nearest mall or movie theatre are our limited options,” says Snigdha Sharma, vice president of equities at brokerage firm Axis Capital. “These guys provide that differentiated play when you want to spend an entire day out with a group of friends or family.”

Wonderla, with a market capitalisation of ₹1,900 crore and parks in Bengaluru, Hyderabad and Kochi, has been a good “niche play for investors” as well, says Abneesh Roy, senior vice president, Edelweiss Financial Services. After debuting on the Indian stock exchanges in April 2014—its shares listed at ₹160 as against its issue price of ₹125—the company’s share price has risen by 108 percent, to trade at around ₹333 (as on June 12). The ride has been good for all so far. But it has had its pitfalls.

When Cittilappilly gave Arun an opportunity to start the first Wonderla park in Bengaluru, he happily took it up. Arun candidly admits that he didn’t want to work directly under his father, the man who has become a bit of a legend by starting and building V-Guard Industries, a manufacturer of voltage stabilisers with a market capitalisation of a billion dollars. “I always wanted to do something on my own. I didn’t mind working with dad, but being under him directly would be a little...,” Arun trails off, with a smile. “We are different in our styles. I like to go with the flow whereas for dad everything has to be [done with] clockwork precision.” 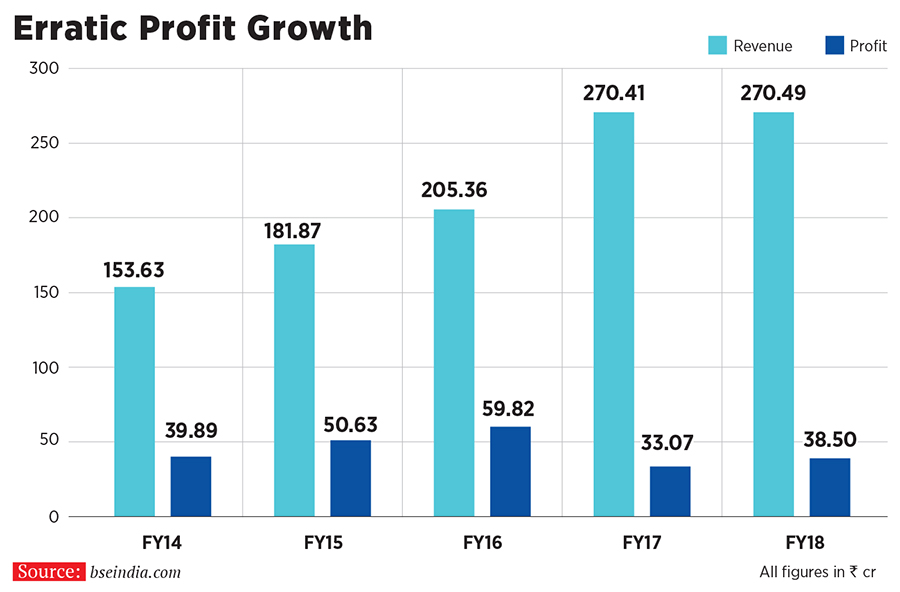 Fresh back with a master’s degree from the Industrial Research Institute of Swinburne University in Australia in 2002, and having married his long-term girlfriend Priya Sarah Cheeran Joseph, Arun could either join V-Guard Industries, or get his hands dirty in the two-year-old fledgling water park, Veegaland, in his hometown Kochi, which his father had started two years earlier while beginning to diversify his company’s interests. “Priya and I wanted to build something of our own. She was also new to the concept of family business,” he says.

Besides, having studied how to design large facilities like factories and airports, Arun picked an entertainment park over V-Guard Industries. But something bigger and better than the ₹22-crore Veegaland. So, Bengaluru it would be, with a budget of ₹100 crore and a brand new identity. In 2005, on the outskirts of Bengaluru, Arun opened the gates of Wonderla to visitors, with rides spread across 80 acres. Because of the park’s distance from the city, “We had a house there [in the park] where we lived. We still have the house, but don’t stay there anymore,” says Arun. He started as the executive director of the parent company, Wonderla Holidays, with his father as managing director. He took over his father’s position in a couple of years.

“Arun is more of a technical person; he’s good at technology, drawing, ideating, and has all the qualities to manage an amusement park. I believe that helped him get involved in the park activities,” says Chittilappilly. In the beginning, he adds, “I was there every alternate week. Slowly that came down, and for the last three to four years I have not been involved in the day-to-day activities of Wonderla.” Chittilappilly has also moved out from the daily activities of V-Guard Industries, with his younger son Mithun, 37, taking over as managing director in April 2012.

“Operationally, Wonderla is the most profitable amusement park company in India,” says Sharma, of Axis Capital. “In fact, none of its other competitors has even broken even.” Among other entertainment parks, which include Mumbai’s EsselWorld, and Chennai’s Kishkinta and MGM Dizzee World, Adlabs Imagica, spread over more than 130 acres off the Mumbai-Pune Expressway, is the only company similar to Wonderla in size. Its listed parent entity, Adlabs Entertainment Ltd, has reported cumulative losses of about ₹470 crore between fiscal 2015 and 2018. In the same period, Wonderla reported a cumulative profit of ₹180 crore.

“From a business perspective, multiple things work for Wonderla: Its pricing is extremely attractive, when compared to Adlabs Imagica; it’s much more affordable to an average middle-class Indian,” says Roy of Edelweiss Financial Services. The average ticket price in Wonderla’s three amusement parks is about ₹1,000 per person for all the rides. At Adlabs Imagica, the ticket prices are split with the water park tickets starting from ₹599, and the theme park tickets starting from ₹999. Food and beverage prices at Wonderla parks are also lower than other entertainment venues like cinema halls.

Although Chittilappilly’s Veegaland (rebranded as Wonderla in 2009-10) was the precursor to Arun’s first Wonderla park in Bengaluru, the lessons learnt from Veegaland did not apply, as they had hoped. For instance, Veegaland was built for about 1,500 people per day, but the water park began to attract about 4,000 footfalls per day, posing a challenge to Chittilappilly. Arun, to not repeat his father’s mistake, gave Wonderla a capacity of 5,000 to 6,000 people per day, and then struggled to attract visitors.

“It was a new market and we were a new amusement park located an hour’s drive outside the city,” says Arun. But the bigger problem was consumer sentiment. “Another park called Sammy’s Dreamland had a huge accident, and shut down a year before we opened.” Media reports say that part of a ride at the park had crashed 20 feet to the ground on November 21, 2004, injuring 13 people, including three children. The accident created a negative image of amusement parks. “We actually had to go from school-to-school, door-to-door to get people to come and try the park. We also issued discount coupons,” recalls Arun.

Arun has set his sights firmly on the future: One amusement park for every large city in India

By fiscal 2008, Wonderla became profitable, only to be hit by the global economic slowdown, which caused a 10 percent decline in footfalls and revenue in FY09. The following year saw the numbers improve again.

The one question that Arun gets asked a lot is whether Wonderla Holidays plans to become India’s version of the US’s Disneyland. It doesn’t. “What I admire about Arun is that he knows India is different, and a me-too version of a Western company model will not necessarily work here,” says Sharma. Arun’s idea of Wonderla is to provide an affordable entertainment option for the masses. “If you look at a Disneyland or Universal Studios theme park, it’s a six-day affair and the base fare is close to $300 [₹20,000-plus]. And that’s just for the rides,” Sharma point outs. Add to that the cost of food and beverage and hotel stay, she says. “That kind of price point is no way going to work in a country like India, which is price sensitive.”

Arun’s next park, a ₹350-crore project, has been planned for Chennai, while he has his sights firmly set on the future: One amusement park for every large city in India. And this definitely means one thing—more visits to more amusement parks around the world, and picking the best rides to bring back home.

Tweets by @forbes_india
The stream of things to come
Jeffrey Katzenberg: How failure makes a better leader