Last year, a MSCHF collaboration with Lil Nas X featuring Nike Air Max 97s modified with a bit of blood and devilish symbolism, sparked a firestorm of controversy as well as a Nike lawsuit. Now, its inventors are back, and not with just another wacko, attention-getting stunt 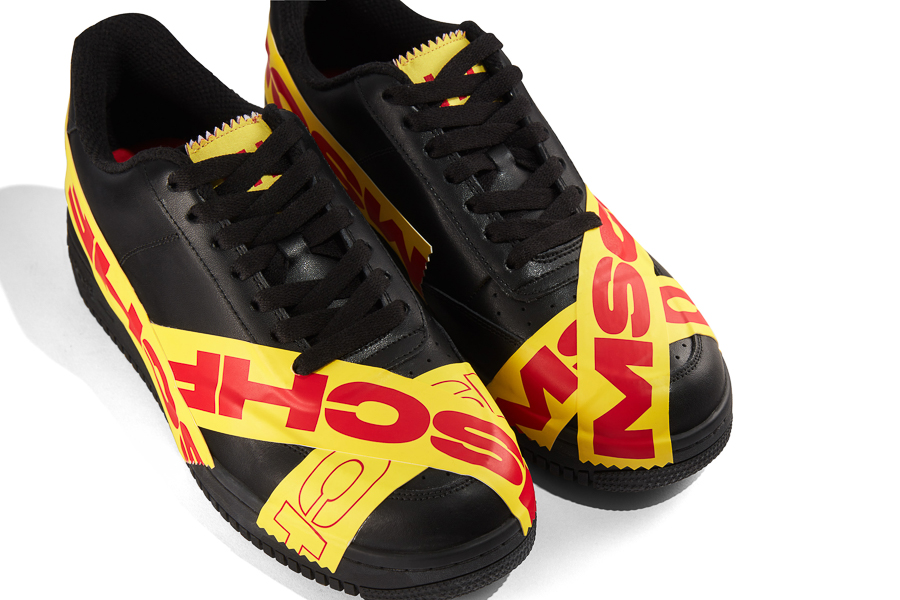 In an undated image provided by MSCHF shows, the new TAP3 sneaker by the creative collective MSCHF, the first release in a new sneaker line. The collection will be sold via app and its own website, and will take the form of mostly monthly drops of different styles, priced around $220 a pair. (MSCHF via The New York Times)

Last year, when MSCHF, the creative collective in the New York City borough of Brooklyn that styles itself as the Banksy of consumer culture, unveiled its “Satan Shoes,” a collaboration with Lil Nas X featuring Nike Air Max 97s modified with a bit of blood and devilish symbolism, it sparked a firestorm of controversy as well as a Nike lawsuit.

In the end, sales were halted and the product, if not its shadow, disappeared from the internet. Now, however, its inventors are back, and not with just another wacko, attention-getting stunt.

With an entire sneaker line. Think Nike meets Supreme meets Warhol, and you’ll get the idea.

Called MSCHF Sneakers, the collection will be sold via app and its own website, and will take the form of mostly monthly drops of different styles, priced around $220 a pair. Unlike previous MSCHF footwear — the Satan shoe; its predecessor, the Jesus shoe (a Nike that contained holy water); or the Birkinstock (a Birkenstock made from an Hermès Birkin bag) — none of the styles will be modifications of existing shoes; they will be entirely original. Which does not mean they will be without reference or a little subversion of contemporary golden calves.

The first style, the TAP3, scheduled to go on sale Monday, is a direct nod to recent history: a leather shape and sole very reminiscent of the Nike Air Force 1, wrapped in slashes of “overmolded thermoplastic polyurethane MSCHF packing tape” that have been permanently melded to the body of the shoe (weirdly reminiscent of the recent Balenciaga show, in which Kim Kardashian arrived wrapped in Balenciaga-branded packing tape). The shoes come in a seemingly familiar looking orange cardboard box with signature bits seemingly covered in packing tape. A matching roll of packing tape comes with them.

Even though there’s not a swoosh in sight, that seems sort of like tempting fate. What were they thinking?

Here’s what MSCHF, which is made up of co-founder Daniel Greenberg, chief creative officer Kevin Wiesner and chief creative officer Lukas Bentel, but, like Vetements and Maison Martin Margiela once did, likes to speak as a collective, said when I asked. This extended email exchange has been edited and condensed.

Q: Seriously, why start with a Nike reference?
A: The approximate shape of the AF1 has become the platonic ideal of a low-top sneaker. The first thing every brand that’s trying to pivot into sneakers does is make a pseudo AF1. That cultural ubiquity makes it an attractive target. And let’s be honest, it’s a bit cathartic for us to launch this particular shoe almost exactly a year after the release of Satan shoes.

Also, in some ways the entire MSCHF Sneakers program is us ensuring we can make whatever we want. When thinking of footwear, there are dozens of ideas that we had for years and years that we knew with mods were just not possible. We had to ask ourselves: Did we really want to do all this work for the reward? The clear answer was yes. We have been working silently for almost a year on these.

Q: Was it a steep learning curve, since you were starting from scratch?
A: Obviously, there was a significant learning curve. That said, while we may not necessarily know how to make shoes, shoe factories and designers did not necessarily know how to make our designs, either. As the program continues, our output gets progressively more and more bizarre. In some ways having no sense of the norms of the industry freed us from constraints. We’re opening sole tooling afresh for every shoe because we didn’t know that’s considered nuts.

Q: Why sneakers at all?
A: Sneakers are a rich cultural format. They sit at a strange nexus of fashion, collecting, hypebeasts and investing — or more accurately, whatever financialized mess sneaker flipping is. There’s a sense that the sneaker space has reached some kind of zenith where everything is a collab and companies build hype around launches practically daily. But from our perspective, everything can be pushed so much further. Who cares about endless “new” releases that are just colorway iterations? For an object that is supposed to encapsulate endgame capitalism, sneakers can still get way funkier.

We knew there was more meat there we wanted to play with in the future, and after Satan Shoes, it was clear we’d have to eliminate any outside dependencies to have creative freedom.

Q: What did you learn from the Satan Shoes experience?
A: Quite a lot about copyright law, the First Amendment and first-sale doctrine, but at the end of the day it reinforced what we already knew: Get off other people’s platforms. To anyone who’s never been on the receiving end of a massive corporation’s lawyers, let us say it stinks. In the end, Nike says we did nothing wrong, and we say Nike did nothing wrong in suing us. Doesn’t mean it was a barrel of laughs.

Q: What makes your shoes different?
A: The thing is, a lot of our sneakers are not how you’d think about sneakers or footwear, so you could argue that we have an advantage over any other sneaker designer because we are taking what is in our mind and doing it. We can literally go into Photoshop, take an iconic sneaker, liquefy it and then make it. Some of our upcoming shoes have truly started as just some members playing around on Photoshop and now they are becoming actual mass-produced sneakers. You might be seeing something like that next month.

Q: Any other hints about what is coming next?
A: In many ways TAP3 is a bit of a fake-out in that it is such a recognizable sneaker form. We have some shoes lined up that are collaborations with well-known musical artists, and we will be appropriating some iconic sneaker forms. Also, as related to the shoes, we won’t just make sneakers. We will make whatever the heck we want.

Tweets by @forbesindia
Inside Bigg Boss' fandom and what brands can learn from it
Storyboard18 - What is the brand power of an alma mater?