A full recovery rests on the return of two pillars of the business, corporate and international travel, but executives said they expected both to improve meaningfully over the coming months 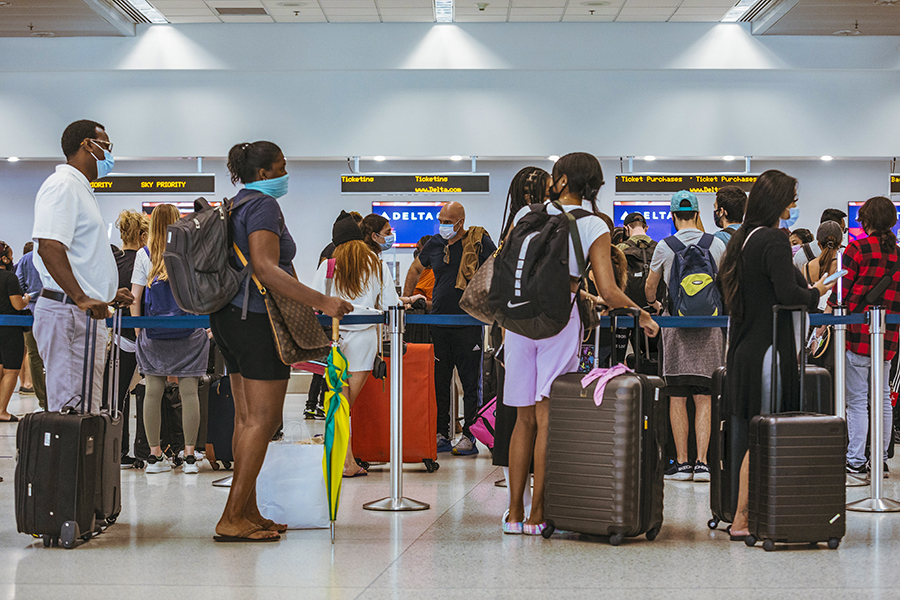 The aviation recovery is gaining momentum.
A summer travel bonanza is exceeding expectations, helping airlines earn profits again and brightening the outlook for the rest of the year. It’s a welcome relief for a battered industry and a sign that the rebound that began this spring appears to be here to stay.
The economic upturn, aggressive cost-cutting and an enormous federal stimulus that paid many salaries have helped to improve the finances of the largest carriers, which took on vast amounts of debt and lost billions of dollars during the pandemic.
This month, consumer spending on airlines briefly exceeded 2019 levels on a weekly basis for the first time since the pandemic began, according to Facteus, a research firm that monitors millions of online payments. Ticket prices have rebounded, too: In June, fares were down only 1% from the same month in 2019, according to the Adobe Digital Economy Index, which is similarly based on website visits and transactions.
And on Sunday, the Transportation Security Administration screened more than 2.2 million travelers at its airport security checkpoints, the most in one day since the start of the pandemic.
“As people have gotten vaccinated and things have reopened, the demand is just very, very strong — and I think, in general, it’s stronger than people thought it would be,” said Helane Becker, an airline analyst at the investment bank Cowen. “People have money and time, and they’re using it to travel.”
A full recovery rests on the return of two pillars of the business, corporate and international travel, but executives said they expected both to improve meaningfully over the coming months. And while the delta variant of the coronavirus could still threaten the travel rebound, customers are so far undeterred.
“We haven’t seen any impact at all on bookings,” Scott Kirby, CEO of United Airlines, said this week on a call to discuss quarterly financial results with analysts and reporters. “The most likely outcome is that the recovery in demand continues largely unabated.”
His comments aligned with those of executives at American Airlines and Delta Air Lines, who said on similar calls that they had seen no drop in demand because of the variant. Both Delta and United added that a vast majority of employees and regular customers have received coronavirus vaccines, which appear to provide protection against the variant.
The rising demand has prompted hiring across the industry. American said Wednesday that it planned to hire 1,350 pilots by the end of next year, a 50% increase over previous plans. Last week, the company announced that it planned to hire hundreds of flight attendants and bring back thousands who volunteered for extended leaves during the pandemic.
Southwest Airlines said in June that it would increase its minimum wage to $15 an hour to retain and attract workers, while Delta is in the middle of hiring thousands of employees. United last month announced plans to buy 270 new planes in the coming years, the largest airplane order in its history and one that would create thousands of jobs nationwide.
Southwest on Thursday reported a profit of $348 million for the quarter that ended in June, its second profitable quarter since the pandemic began. American reported a $19 million profit over the same period, while Delta last week reported a $652 million profit, a pandemic first for each airline. United this week reported a loss, but projected a return to profitability in the third quarter as its business improved faster than forecast.
Passenger volumes are still down nearly 20% from pre-pandemic levels, and airlines suffered widespread delays and cancellations as passengers returned in droves last month, according to data from FlightAware, a flight tracking company. About 17% of Delta’s flights were delayed at least 15 minutes in June, along with more than 20% for United, more than 30% for American and 40% for Southwest.
“While the rapid ramp-up in June travel demand provided stability to our financial position, it has impacted our operations following a prolonged period of depressed demand,” Southwest’s CEO, Gary Kelly, acknowledged in a statement Thursday. “Therefore, we are intensely focused on improving our operations as we restore our network to meet demand.”
Carriers have also struggled to get workers in place to meet that demand. American suffered shortages of catering and wheelchair operators last month, while it also accelerated pilot training to bring more than 3,000 back from extended leaves. Last week, Ed Bastian, CEO of Delta, said the airline had struggled to train new or long-sidelined employees.
“It takes a few months, and the demand has come back at such a fast clip,” he said. “It’s taken us all a little bit of time to catch our breath. But we’ll be fully back over the next couple of months.”

Tweets by @forbes_india
How much do Instagram influencers really make?
How Venice dodged UNESCO endangered listing