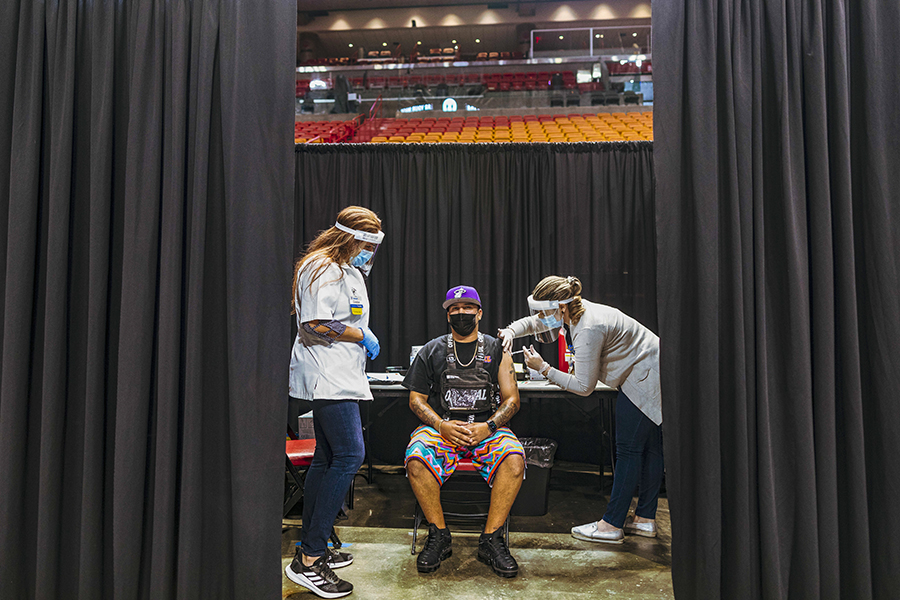 In the United States and many other nations, lower-income and less educated adults have been hit harder economically by the coronavirus pandemic.
But the relationship between class and COVID-19 is not inevitable: It doesn’t exist in some of the most egalitarian societies of Europe and Asia, according to a new global survey from Gallup, conducted from July 2020 to March 2021.
Globally, 41% of workers in the poorest 20% of their country’s income distribution said they lost their job or business as a result of the pandemic, compared with 23% of workers in the richest 20%. That gap in job loss is similar between those with a college degree (16% who have lost a job or business) and those without (35%).
The gulf in economic vulnerability is strongly linked to the prevailing level of income inequality going into the pandemic. In the most economically egalitarian nations (as measured by the Gini coefficient for household income), workers with lower incomes and less education were protected from mass unemployment, in part through national policies that sought to prevent job loss.
What we know about class and COVID
Public health experts have long understood that socioeconomic status is closely related to health outcomes and susceptibility to contagious diseases. Evidence from a handful of countries — including the United States, England and France — shows that COVID-19 has caused a higher death toll in lower-income communities and among Black people and some ethnic minorities.
These gaps appear to largely be a result of exposures generated through work, rather than noncompliance with safety guidelines. Black people in the United States are more likely than white people to report social distancing and mask use, but at the onset of the pandemic they were about 30% more likely to work in occupations requiring close physical proximity, according to research scheduled for publication in the Annals of the American Academy of Political and Social Science.
The income-based divide is even sharper: Workers in the bottom third of the income distribution were four times more likely than workers in the top 10% to be in a job that required close physical proximity. Except for doctors and a few other professions, highly educated workers rarely need to be in direct contact with other people.
Double risks
The overexposure of low-income workers to in-person and face-to-face work has created double risks for the less affluent: heightened threats of both physical and economic harm. In the United States, for example, the unemployment rate for workers in food preparation and serving jobs increased to 19.6% from 5.5% from 2019 to 2020, as people stopped dining out.
Around the world, lockdowns and social distancing ravaged lower-income jobs requiring less education. In 103 of 117 countries in Gallup’s World Poll data, workers in the bottom quintile of household income distribution experienced significantly higher job loss rates than those at the top. College graduates did significantly better than those with less than 16 years of education in 97 of 118 countries and territories.
Workers without a college degree in low-income countries fared the worst, despite tending to live in areas with a much lower reported COVID-19 death toll through the period of survey collection than in high-income European and North American countries. More than two of three workers without a college degree lost their job or business as a result of COVID-19 in the Philippines and Kenya, though per capita death rates were 7% and 2% of the rate in the United States.
More than half of those without a college degree lost their jobs in Zimbabwe, Thailand, Peru and India. Rates of job or business loss were at least 10 percentage points less for college-educated workers in these countries.
While economic damage was generally worse in low-income countries, the United States stands out among high-income democracies as experiencing both high job losses and a large gap between workers with and without a college degree. Among the 31 OECD member countries with data, the United States had the third-largest gap in job loss between college degree holders and nonholders (8 percentage points), behind Chile and Israel.
Keeping employees attached to employers
More egalitarian countries tend to have more trusting populations, research shows, creating conditions that seem to lead to cooperation and effective collective action.
It’s possible that elected officials in more egalitarian countries are likelier to create policies to protect workers from layoffs — as was the case in Denmark, the Netherlands and New Zealand, which are in the bottom quintile of global inequality measures, as well as Ireland, Australia and Britain, which are in the second-lowest quintile of inequality.
These policies directed income support to businesses affected by the pandemic to maintain their workforce. Other more egalitarian countries — like France, Germany and Switzerland — drew upon and expanded existing employer-subsidy programs devised to keep employees attached to employers.
No such policies were enacted in Chile or Israel, whereas the U.S. government created the Paycheck Protection Program. That program shared characteristics with the successful policies of Europe, but came too late to prevent mass layoffs, as Federal Reserve economists have found, with too many administrative and eligibility complications.
Still, even with those limitations, U.S. layoffs would have been drastically worse without it, according to analysis from economists at the U.S. Treasury Department. The federal government vastly expanded spending in other ways to lesson the harm to those laid off, such as subsidized unemployment insurance and direct payments to low- and middle-income households.
But there’s a good reason it’s best not to be laid off in the first place: Evidence from previous recessions shows that millions of laid-off workers will never return to their employer.
Moreover, recent data from Gallup’s Great Job Survey shows that people who were laid off because of the pandemic and rehired experienced a large drop in job satisfaction and continued to struggle to meet monthly expenses. Globally and in the United States, the world poll shows that those laid off as a result of the pandemic were significantly more likely to report a decline in their standard of living relative to the previous year.