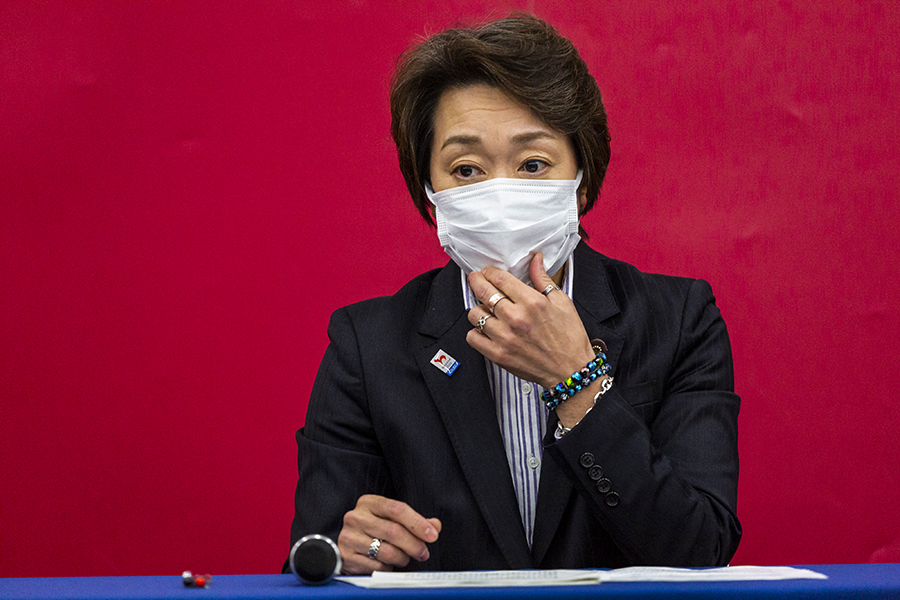 TOKYO — Bending to intense criticism from abroad and social media activism at home, the Tokyo Olympics organizing committee on Thursday appointed Seiko Hashimoto, one of Japan’s two female Cabinet ministers, to replace the previous leader, who resigned last week after making sexist remarks. The selection of Hashimoto, 56, an Olympic medalist in speedskating, represented a stark generational and gender shift for the committee. The man she is succeeding, Yoshiro Mori, is an 83-year-old former prime minister who stepped down after saying that women talked too much in meetings. The man the committee had initially planned to turn to next — Mori’s handpicked choice — is an 84-year-old former leader of Japanese soccer. The appointment of Hashimoto did not stray far from the entrenched establishment that governs Japan. But both Mori’s resignation and his successor’s ascension reflected the potent voice that Japanese people — especially women in a male-dominated society — have found online, swaying the course of what was viewed as an important symbolic decision. “In the past, he would have been just criticized, and then the issue would have ended,” said Kazuyo Katsuma, a businesswoman and prominent author of best-selling books on gender and work-life balance, speaking about Mori. “But this time he had to resign because of a lot of criticism from women who raised their voices.” Yet even as some praised the capitulation of Mori, others wondered whether Hashimoto’s appointment was much more than a cosmetic decision, made under duress, in a country that ranks 121st out of 153 countries in the World Economic Forum's global gender gap index. Some of the most significant criticism of Mori had come from outside Japan, with many traditionalists inside the country defending him. “It’s a very superficial appointment,” said Momoko Nojo, 22, an economics major at Keio University in Tokyo and one of the authors of a Change.org petition that called for systemic change in the wake of Mori’s remarks. “I think it’s kind of doubtful that this moment will make a great change to empower women in society.” Nevertheless, women of an older generation suggested that simply mobilizing a group of younger activists was an achievement. “I’ve not seen this much movement or energy for gender equality in Japan for a long time,” said Kikuko Okajima, 62, the chair of the Women Empowerment League, a newly forming professional soccer league for women in Japan. “So Mr. Mori created that moment to spur this discussion and movement.” After Mori resigned last Friday, a second outcry on social media prodded the organizing committee to abandon its original choice of Saburo Kawabuchi as his successor. The committee swiftly changed plans after critics pointed to Kawabuchi’s age, his apparent support for corporal punishment of children and the seeming back-room nature of his selection. Toshiro Muto, the chief executive of the organizing committee, then announced the formation of a new selection committee, divided evenly between men and women, to choose a replacement just five months before the Games are scheduled to open in July. Hashimoto seemed the clear leader from the start, though it took nearly a week to make her appointment official. Hashimoto is a member of Prime Minister Yoshihide Suga’s governing Liberal Democratic Party and has served in the upper house of Japan’s Parliament since 1995. In accepting her new role, Hashimoto gave up her Cabinet post as minister for the Olympics and for gender equality. Speaking on Thursday afternoon after she was officially appointed, Hashimoto said her first priority would be to implement measures to protect against the coronavirus at the Summer Games so that “both the Japanese people and people from abroad will think that the Tokyo Games are safe and secure.” In a news conference that evening, Hashimoto spoke directly to athletes, saying that as a former Olympian herself, she wanted them to “perform on this dream stage without hesitation.” She also acknowledged that she was taking up the post after a scandal stemming from her predecessor’s sexist remarks — comments that raised questions about the organizing committee’s commitment to gender equality. She said she would work to establish a “gender equality promotion team” within the month. In a statement, the selection committee said it had chosen Hashimoto because of her “deep knowledge of sport, an understanding of the issue of gender equality and experience working to achieve it, international experience and perspective, and a thorough understanding of preparations for the Games.” Hashimoto is no stranger to being a pioneer in male-dominated spaces. She was the second member of Parliament to give birth while in office, and in order to accommodate her, Parliament changed its rules to allow members to take time off for childbirth. Hashimoto took a week’s leave when her daughter was born. As an Olympian, Hashimoto was selected for a total of seven Summer and Winter Games in the 1980s and ’90s, competing in speedskating and cycling. She won a bronze medal in the 1,500-meter speedskating event at the Winter Olympics in Albertville, France, in 1992, becoming one of the first two Japanese women to win a medal at a Winter Games.

Tweets by @forbes_india
Facebook's new look in Australia: News and hospitals out, aliens still in
Ten interesting things we read this week