In his second time moderating a presidential debate, Fox News anchor Chris Wallace attempted to reset the proceedings midway through 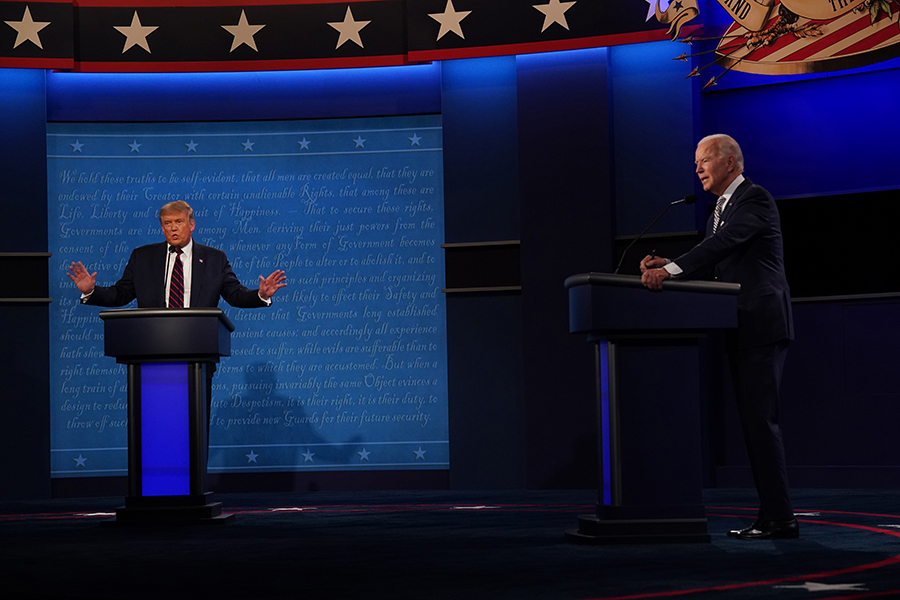 On the eve of Tuesday’s presidential debate, Chris Wallace of Fox News declared his goal as the evening’s moderator: “My job is to be as invisible as possible.” Quite. With a pugilistic President Donald Trump relentlessly interrupting his opponent, Joe Biden, Wallace repeatedly struggled Tuesday to keep the proceedings coherent, reduced at times to pleading with the president to pause and allow his opponent to speak. “Mr. President, I am the moderator of this debate, and I would like you to let me ask my question and then you can answer it,” Wallace, sounding more headmaster than moderator, instructed Trump early on. (Trump did not accede.) Known for his sharp interrogations of political figures, Wallace — at 72 the youngest of the three men onstage — succeeded in keeping Trump more or less in check during his first go-round as moderator four years ago, when the pundits declared the veteran Fox News anchor a clear winner of the night. On Tuesday, Wallace faced harsh reviews as viewers assessed his performance on social media. “Moderate this debate — now,” Michael Beschloss, the presidential historian, demanded on Twitter 15 minutes in, speaking for a large swath of the political class. In a brute-force style, Trump flouted the agreed-upon ground rules and refused to allow Biden his two minutes to respond to questions, leaving Wallace yelping at one point, “Let him answer!” Not satisfied with merely speaking over his Democratic opponent, Trump took aim at the moderator, too, repeatedly scolding Wallace. “I guess I’m debating you, not him, but that’s OK, I’m not surprised,” Trump said after one Wallace query he disliked. The debate had no breaks. But at the midway point, perhaps sensing that Trump was threatening to steamroll the event, Wallace did something unusual for a presidential moderator: He effectively called the debate to a temporary halt. “The country would be better served if we allowed both people to speak with fewer interruptions,” Wallace said, directly asking Trump to yield a higher civic ideal. “I’m appealing to you, sir, to do it.” “And him, too?” the president replied defiantly, nodding at Biden. “Well, frankly, you’ve been doing more interrupting,” Wallace replied. Few journalists envied the moderator his task heading into the night. Trump’s onstage intensity and logorrhea have proved a formidable challenge for some of the nation’s leading interviewers. And with the president ignoring the traditional parameters of debate decorum, Wallace was left with few good options to keep Trump from chattering without pause. He tried humor: “If you want to switch seats, we can do that,” Wallace told the president at one point, arching a brow. (Trump did not parry.) He said he regretted having to raise his voice, “but why should I be different than the two of you?” On social media, some viewers at home called for the president’s microphone to be shut off, but that was a power Wallace did not possess: Neither campaign would have agreed beforehand to such a mechanism. Which left the moderator, a lonely man on a large stage, having to try to cajole, joke, plead and argue to maintain order. “If you are coming down hard on Chris Wallace, ask yourself: What could a moderator have done in the face of Trump’s behavior?” veteran political strategist Jeff Greenfield asked on Twitter immediately afterward. Lester Holt, who had Wallace’s role as leadoff moderator of the 2016 debates, gave a resigned response on the NBC News telecast after the debate ended. “If hearing that this debate is over was music to your ears, you may not be alone,” Holt told viewers, adding, “I’m at a bit of a loss for words.” Wallace, son of the “60 Minutes” legend Mike Wallace, drew on the entirety of his on-screen repertoire: the defusing aside, a self-deprecating remark, a jabbing question. None seemed to knock Trump off his determination to dominate the night. It was a far cry from Wallace’s stated goal for the debate. “I’m trying to get them to engage, to focus on the key issues, to give people at home a sense of ‘why I want to vote for one versus the other,’” he had said beforehand. Instead, he closed the evening with Trump still talking off screen, attempting to argue over Wallace’s signoff. “This is the end of this debate,” the Fox News anchor said, drawing a deep breath. “It’s been an interesting hour and a half.” Two more matchups are scheduled between Trump and Biden, and the next moderator assigned to maintain control will be a TV personality known less for jousting with lawmakers than listening, quietly and attentively, to rambling on-air callers: Steve Scully of C-SPAN. The message from Tuesday night: good luck.

Tweets by @forbes_india
Why downloading CRED this IPL season will make your life more rewarding
After Covid-19, health care gets a big dose of tech