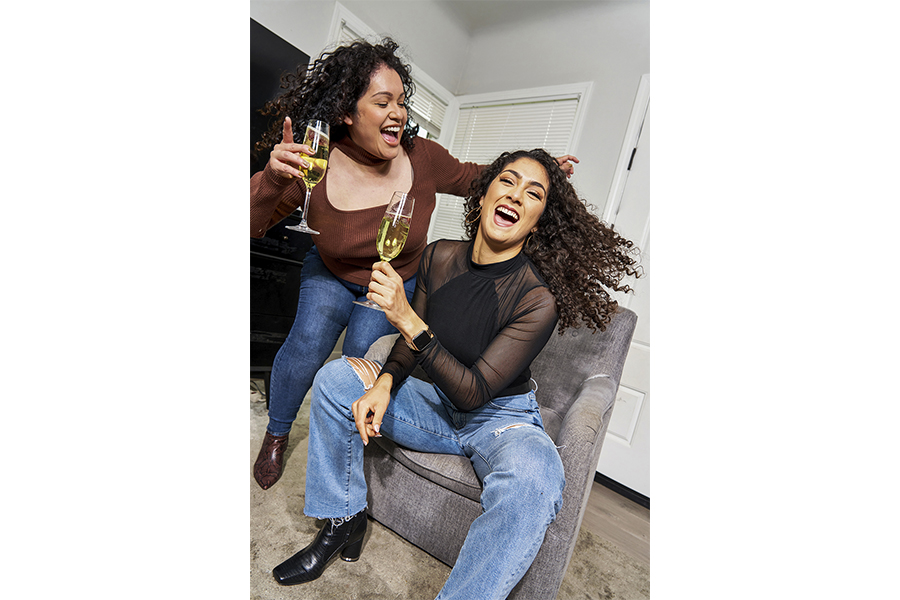 Cat Del Carmen, left, and Erika Cruz, in Los Angeles on Jan. 17, 2022, are not exactly mourning having left their jobs. According to Labor Department data, more than 4.5 million people left their jobs voluntarily in November 2021, a record high in two decades of tracking. (Michelle Groskopf/The New York Times)

Something infectious is spreading through the workforce. Its symptoms present in a spate of two-week notices. Its transmission is visible in real time. And few bosses seem to know how to inoculate their staff against this quitagion.

“There’s a shock when you see multiple people leaving; it’s like, oh, is there something I’m not seeing?” said Tiff Cheng, 27, who left her job in digital marketing in July along with five of her close friends at the 40-person agency. “Is it my time to leave as well?”

Quitting rates were high in August, September and October. Then, according to Labor Department data, they climbed even further: More than 4.5 million people left their jobs voluntarily in November, a record high in two decades of tracking.

Economists explained the numbers by noting that competition for workers led to better pay and benefits, driving some to seek new opportunities. Psychologists have an additional explanation: Quitting is contagious.

When workers weigh whether to jump jobs, they do not just assess their own pay, benefits and career development. They look around and take note of how friends feel about the team culture. When one employee leaves, the departure signals to others that it might be time to take stock of their options, what researchers call “turnover contagion.”

So quitting begets more quitting, a challenge that employers cannot always solve with raises or perks. Even a single resignation notice can breed a “hot spot,” said Will Felps, who teaches management at the University of New South Wales and was an author of a study of turnover contagion.

Felps and his team studied staffing at a hospitality company and a selection of bank branches, all in the United States, and found that one worker’s decision to leave is especially likely to inspire others who do not feel strongly embedded at the company. In a recent poll of more than 21,000 LinkedIn members, 59% said a colleague’s departure had led them to consider quitting as well.

The office has long been a petri dish for infectious behavior. Lying, cheating and job satisfaction all tend to spread from desk to desk. Financial advisers, for example, are 37% more likely to commit misconduct if they encounter teammates who have done so, what researchers refer to as “peer effects,” noting that one case of misconduct results on average in an additional 0.59 cases. Employees also mimic the nutritional patterns of people they sit with in the cafeteria. Teammates are suggestible to one another in far subtler ways than they realize.

But when it comes to heading for the exit, peer effects are particularly potent.

“When you walk by a restaurant and it’s full of people, it’s a clue this restaurant is pretty good,” Felps said. “Similarly, when the people you know, like and respect are leaving a job, you think maybe the grass is greener somewhere else.”

Cheng saw her inbox begin to fill with resignation notes last summer. Every other week she got an email from a colleague who was quitting her company, where hours were long and career advancement options seemed limited. She decided to turn full time to her own coaching business, which she now runs from Vancouver, British Columbia.

“It’s always really scary to make a decision to leave your job, and it was nice to be able to see other people were doing it,” Cheng said. “It didn’t feel as lonely, or like I was an outsider.”

A sense of workplace disaffection and restlessness started growing for many Americans in the early stages of the pandemic. For some, social media became a therapy couch, a space to vent those employment frustrations.

Back in March 2020, Erika Cruz, 31, was working at a Silicon Valley startup, where she had grown disgruntled with the hallmarks of work life: “meetings that could have been an email” and lack of control over her schedule.

She got the motivation she needed to leave that summer when she watched a friend she had met on Instagram ditch a cushy tech job to open a coaching firm. Then Cruz, who had about six months of living expenses saved up, moved back to her parents’ home in the Bay Area and put in her one month’s notice at work. She sought advice from social media about how to start a business. Cruz realized, though, that there was no one-size-fits-all approach to upending a career.

“If you Google banana breads, there’s over a million recipes online, and they’re all going to be good, but they’re all slightly different,” she said. “You have to choose your own recipe.”

It is the story of the pandemic: When people posted their banana bread photos, they influenced their friends to start baking as well. But like quitting, it was something no two people did the same way.

The friend who inspired Cruz’s resignation, Cat Del Carmen, 34, agreed that it was important to develop her own quitting strategy. Del Carmen was able to leave a job at Adobe by cutting back spending on restaurant meals, vacations and TJ Maxx splurges. The six months after she left her job were high pressure financially. Del Carmen drew comfort from her correspondence with friends on social media who were also navigating the post-paycheck territory.

Aimee Wells, 53, who works in public relations, had her own quitagion experience years ago. She had been working at a global marketing firm in San Francisco, where she bristled at the time constraints of corporate life. She was never able to drop off her son at kindergarten. She remembered watching the 1996 movie “One Fine Day,” in which Michelle Pfeiffer plays an architect who decides to make her family a priority over high-powered work. It left Wells grappling with how to reset the balance between her own corporate job and personal life (far as it was from the realities of Pfeiffer and George Clooney’s).

One evening, on the train coming home from work at 6, she ran into a neighbor carrying shopping bags full of files, office supplies and photographs. The neighbor told Wells that she had just quit the role that was burning her out.

“I went home and started thinking about it a lot more seriously,” Wells said. One month later, she put in her own resignation notice, catalyzed by the run-in with her neighbor. “She was like my hero.”

The payoffs for some pandemic quitters have been significant. Nikissa Granados, 26, was weighing whether to leave her job at an Orange County, California, school in 2020 to do freelance social media marketing. She made the leap after seeing two of her teammates resign.

Granados went from making $2,100 a month, spending days on her feet setting up cots for nap time and begging children to wear their masks, to making as much as $8,000 monthly while dictating her own schedule, she said. She realized something now viscerally clear to many child care providers: In her work at the school, the mismatch between strain and pay had been stark.

For employers, replacing just one quitter is a straightforward task. But replacing several or even dozens is far more challenging, and the interim period tends to leave existing staff members with a heavier load, while recruiters field awkward questions about what is fueling all the departures. With quitting rates soaring, some executives are wondering how to lift morale.

Seth Besmertnik, CEO of the marketing software company Conductor, had seen his company’s turnover rates hover in the low single digits for years. He even worried that his retention was too strong, making it hard to scout new talent.

Over the last two years, though, turnover rose into the double digits. Besmertnik had to get creative in his tactics to keep workers content, including adding new holidays and bringing Broadway actors from “Hamilton” and “Dear Evan Hansen” to sing “Burn” and “Waving Through a Window” (respectively) for staffers during all-company video meetings.

“There’s a little bit of a ‘take this job and shove it’ feeling,” Wells said. “If you’re in a company where people all start leaving, you’re like, ‘Why am I the last one sitting here?’