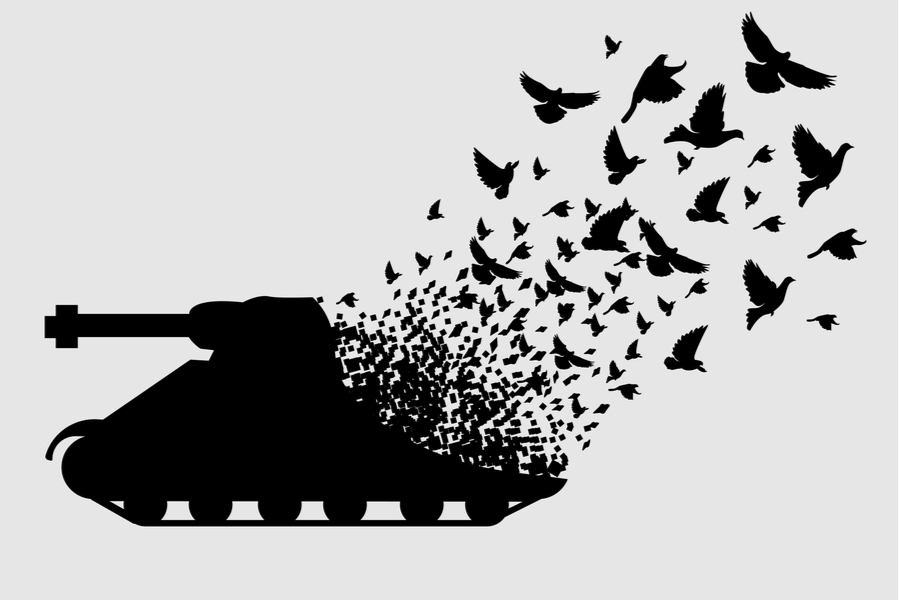 Outside the classroom, Harvard Business School Professor Deepak Malhotra’s abiding interest is war and peace–how wars begin and end, how they could have been avoided, and what lessons can be learned from them. Along with studying wars, Malhotra has advised nations with intractable armed conflicts, “to help them find a way forward,” he says.

Last spring, he took those lessons into the classroom with a new course, “War & Peace: The Lessons of History for Leadership, Strategy, Negotiation, Policy, and Humanity.” The course provides a detailed exploration of the successes and failures of leadership, strategy, and negotiations in several conflicts, ranging from the ancient Peloponnesian Wars between Athens and Sparta, to World War I and World War II, to the Korean War and the 1962 Cuban Missile Crisis.

While it may sound like a social studies course, these wars offer an array of lessons for corporate leaders and entrepreneurs. After all, leadership challenges, strategic choices, and high-stakes negotiations are constants not only in conflicts among nations, but in the business world, too, he points out. So business leaders would do well to consider the cautionary failures and promising successes on the world’s battlefields as they pursue long-term success.

“You don’t want to copy and paste the strategy and tactics” from one war to the next, says Malhotra, the Eli Goldston Professor of Business Administration. “You try to draw out different principles,” and apply that understanding to the unique challenges you confront. The process is crucial in business as well as war and diplomacy because, as Malhotra says in his course syllabus, “being smart and well-intentioned is not enough.”

For Malhotra, who has taught negotiation and other subjects at HBS since 2002, the “War & Peace” course stands out as a favorite. It even inspired him to write his fourth book and his first novel, The Peacemaker’s Code, released this month. The book is a science fiction thriller in which a young Cambridge historian is called to Washington to advise the United States president to avert a cataclysmic war.

Consider a conflict from an opponent’s viewpoint
The wars Malhotra examines in his “War & Peace” course illustrate the hazards of drawing lessons from too few salient experiences, of failing to properly diagnose the causes of past failures, and the critical importance of seeing a conflict from the other side’s point of view. Here are some observations from his course’s case studies:

Peloponnesian War (431-404 BCE): Successful agreements support both sides
Fought in three phases between Athens and Sparta, the Peloponnesian War featured a failed peace treaty and ended with Sparta’s victory and the eclipse of Athens as a power and a democracy.

For Malhotra, the war raises the question of why some conflicts seem inevitable, even when rivals try to avoid them, and how those value-destroying conflicts might have been averted. He says it also illustrates the need for balancing perseverance and flexibility when implementing a strategy.

He says this war also demonstrates the potential impact of leadership transition on strategy, and the pitfalls of negotiated agreements that do not properly account for the interests of each side.

World War I (1914-1918): Aggression often begets aggression
A political crisis sparked by the assassination of Austrian Archduke Franz Ferdinand led to escalating mobilizations, trench warfare, the collapse of the Russian Empire, and a peace treaty that punished Germany.

“You might take the lesson that, if people are too quick to be aggressive, too quick to push back on others, that will lead to conflict,” Malhotra says. “So you should be more patient, more pliant, more forgiving when conflict has the potential to escalate. But even this seemingly reasonable conclusion is dangerous to apply blindly in every future conflict—as becomes clear only a few decades later, in the lead up to the second World War.”

World War II (1939-1945): Strategies must reflect their unique circumstances
The Treaty of Versailles left Germany spoiling for revenge, and it also left its World War I adversaries in an economic depression and anxious to avoid another war. Malhotra says that viewpoint and the lessons “learned” in World War I, may have led the Allies to not be aggressive enough, thereby failing to deter Adolf Hitler and other fascists.

For business entrepreneurs, he says the takeaway is that “the approach that is successful in one venture doesn’t necessarily succeed in another.” Similarly, “what works when leading a small organization might not work with a larger one, and a strategy that you have relied on gainfully in past negotiations might need to be entirely discarded in the next deal.”

The case also led to a fascinating discussion about whether the failure to avoid World War II was primarily a failure of leadership, strategy, or negotiation. “It is not as easy a question to answer as it might seem, and it leads to a better understanding of the role each of these aspects play in determining success versus failure,” he says.

Korean War (1950-1953): Action can’t always wait for ideal conditions
After escalating tensions, Communist North Korea, supported by China and the Soviet Union, invaded South Korea. United Nations forces led by the US entered the fray on behalf of South Korea, and China later entered the war to support the North. An armistice has held since 1953. A peace treaty has yet to be signed.

Malhotra says this case study was deeply engaging for his students when the class examined the question: At what point would this conflict have been easiest to resolve?

“It leads to a conversation about how one might recognize opportunities that others miss, and what stands in the way of leveraging these opportunities,” he says. “It also raises the question of what conditions are necessary to improve the odds of success, and whether and when it is worth investing in changing conditions, rather than waiting for the right conditions to emerge.”

Cuban Missile Crisis (October 16-29, 1962): Empathy is an essential skill
Precipitated, from the US perspective, by evidence that the Soviet Union was installing nuclear missile sites in Cuba, 90 miles from the United States, the showdown is considered the closest to a nuclear war the world has ever come.

Malhotra has used the missile crisis as a case study for years because he says the resolution of the standoff offers many lessons for leadership, strategy, and negotiation. One of the chief lessons, he says, is the importance of cultivating a high degree of empathy–not sympathy in the sense of pity, but the ability “to see the world the way others see it.”

“If there’s one characteristic common to success in all three of these areas—leadership, strategy, and negotiation—it’s the need for a high degree of empathy,” he says. “If you want to lead, you need to understand how those you lead think and feel. If you are to strategize, you must understand how the other side sees the game and is likely to play it. If you want to negotiate effectively, you must understand the interests, constraints, alternatives, and perspectives of the other sides in the negotiation.”

How the world works
Malhotra is on sabbatical this year, but he’ll offer the “War & Peace” course again next spring. The 2020 debut was popular: Approximately 100 second-year MBA students took the class, with 10 spots reserved for students from outside of HBS.

His main goal in creating the course wasn’t necessarily to provide his students with business skills, but to prepare them for the world beyond the boardroom.

“I want them to see how the world works and why others around the world might have very different views, so that they will more effectively engage those people,” he says. “Ultimately, it is much more important that we graduate students who will be informed, value-creating citizens of the world, and who exhibit moral courage, than to ensure that our alumni are competent businesspeople.”
About the Author

Lane Lambert is a writer based in the Boston area.