Who’s the Fairest of Them All? 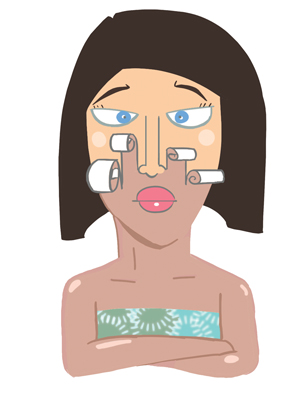 "Say it Loud — I’m Black and I’m Proud", James Brown famously sang during the height of the US civil rights movement. While mass popularisation of whitening creams would fuel a politically charged debate in the West, the excitement for these products in countries such as India, China and Japan overwhelms any public sentiment. Estimates give the growth of the half a billion dollar fairness market at 20 percent a year in India, with an even stronger stand-alone growth in the rural areas. A controversial Facebook app by Vaseline in which you can lighten your profile photo has over 11,000 active monthly users with only 330 members in a group protesting it.

Why is the Indian market for whitening creams so crazy? On the eve of Independence Day, I would put the first culprit as the British Raj that hammered into people’s heads a mental model where light skin means greater affluence and social mobility. Building upon that sentiment, contemporary creative marketing minds developed household brands that spread the influential notion that careers and matrimonial prospects go up when skin tones go down.

One truism is that societies across the world have used physical appearance to convey status. England’s nobility were people of such leisure that compared to the labour folk who needed to toil and tan under the sun, the blue blood of their superficial veins could be seen through their pale skin. Being a blueblood was to be noble. Then around the time that the Tricolour was raised, the swimsuit was lowered and the bikini first worn. Leisure and high status in the West started to be associated with tanned skin. This trend continues as a recent study in Australia showed that young men and women consider tanned skin to be healthier and more attractive than lighter skin.

Value judgments aside, the explosive popularity of skin fairness products behooves a little inspection into their mechanisms of action and safety.

Skin tone is determined by the amount of pigment or melanin in your skin. If you lounge under the sun, a class of ultraviolet rays (UVA) makes your melanin darker. The other class of ultraviolet rays (UVB) causes some DNA damage that triggers the expression of more of the protective pigment. Alarmists read DNA damage and run for shade. That is a mistake. Dr. Edward Giovannucci, a professor of nutrition at Harvard School of Public Health describes how for every one death caused by skin cancer, exposure to the sun’s ultraviolet rays prevents 30 deaths. The reason is that UVB radiation on the skin is the most important source of Vitamin D.

If sun causes pigmentation, wouldn’t a simple sunscreen suffice to keep skin fair? Yes, most whitening creams are composed of a sunscreen along with melanogenisis inhibiting compounds. Some compounds such as resveratrol, found in the skin of grapes, stop the formation of melanin. Others such as Niacinamide block its transfer to the skin. Fair & Lovely’s Web site explains how their patented formula has a “synergistic combination of Vitamin B3 (Niacinamide) with UVA and UVB sunscreens.”

Unregulated cosmetics may contain steroids, mercury, or hydroquinone (over 2 percent) and should be avoided due to potential toxicity. Also remember that too much sunscreen will decrease the amount of UVB reaching the skin, lowering Vitamin D levels.

The most important moral of our story can be learned again from Fair & Lovely’s Web site: “It is not possible for any cosmetic to make anyone fairer than their original complexion (i.e. the color their skin was at the time of their birth).” If you find yourself asking your mirror some deep questions, make sure the answers you are seeking are not just cosmetic.

Vikram Sheel Kumar, MD The author is a graduate of Harvard Medical School and founder and vice president of Doctor Kares Hospital

Tweets by @forbesindia
Once Upon a Time: History of Indian Business
How to Speed Up Energy Innovation