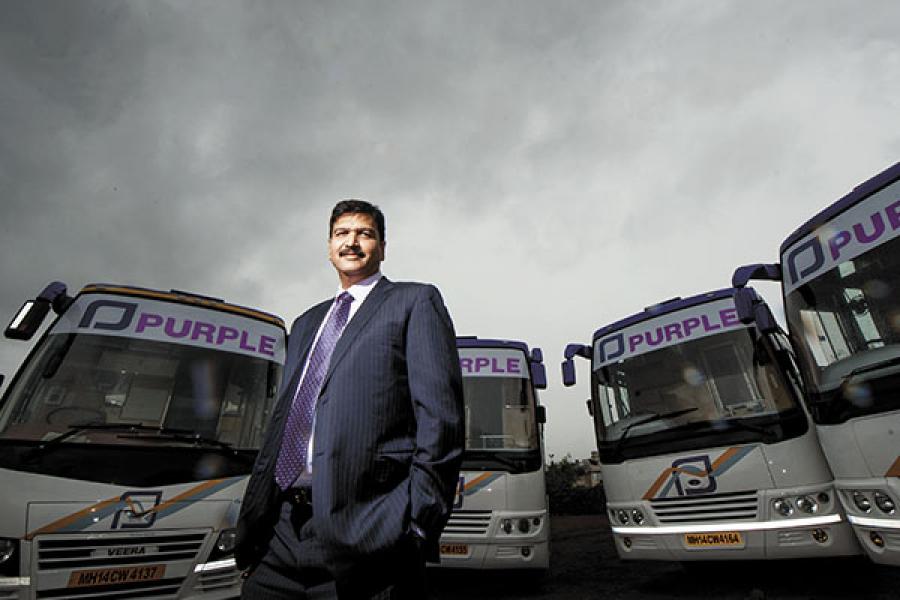 When one door closes, another opens, or so goes the old adage. But in 1985, when Pune University decided to trim the size of its transportation contract with Prasanna Travels, not one but many new doors opened for the company. The university had decided to merge the cars of its various departments to create a common pool of fewer vehicles that could be used by its entire staff. The restructured contract took a toll on Prasanna Travels, its sole vehicle contractor. 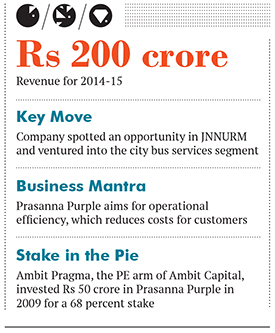 Forced to supplement the university business, Prasanna Travels ventured into corporate taxi services. It already had a fleet of taxis plying on the Pune-Mumbai route at the time. Between 1988 and 1992, the company also started intercity bus services across Maharashtra and nearby states.

But the company’s big break came in 2009 when it entered into public-private partnerships (PPPs) with civic authorities in Jalgaon (Maharashtra) and Indore (Madhya Pradesh), to run intercity bus services. Today, the majority of the company’s revenue comes from city bus services in various parts of the country.

In 1996, the company had an annual turnover of Rs 21 crore, which increased to Rs 200 crore by FY2015. In 2010, the company changed its name to Prasanna Purple Mobility Solutions to become a pan-India brand. (There was a feeling that Prasanna was a South Indian name and the company catered to only that region.)

The person behind it
Prasanna Patwardhan, chairman and managing director of Prasanna Purple, took over his father’s transportation business by chance in 1986. After completing his BSc, and a course in marketing management, he was running a small chemical trading company.

His father, who was running Prasanna Travels at the time, wanted one of his sons to join the business and take it forward after the Pune University contract was trimmed. Since his elder brother’s inclination was more towards science than entrepreneurship, Patwardhan inherited the family business.

In 1988, he got a permit to operate air-conditioned coaches in Maharashtra and started bus services on the Pune-Mahabaleshwar route followed by Pune-Jalgaon. In 1992, Patwardhan started a tours business called Prasanna Tours and Travels. In 1996, Patwardhan started operating bus services on the Mumbai-Pune route. In the same year, he also got into the business of motels which did not do well but Patwardhan calls it a “good learning experience”.

In 2007, Patwardhan came up with the idea of running city bus services to cash in on the Jawaharlal Nehru National Urban Renewal Mission (JNNURM), which aimed to develop the country’s urban transport infrastructure.

Patwardhan knew that his dreams of expanding his business called for massive investments to buy new buses. He started to eye private equity seriously and was introduced to Rajeev Agrawal of India Value Fund in 2007. Agrawal later moved to Ambit Pragma Ventures, the private equity arm of Ambit Capital, and that is when he decided to invest Rs 50 crore in Prasanna Purple in 2009. “Anybody can run a transport business. But we try to bring in operational efficiency which in turn reduces costs for our customers,” says Patwardhan, 53.

Today, the company operates around 1,000 buses (of which 750 are owned by the company itself) across Madhya Pradesh, Maharashtra, Karnataka, Gujarat and Delhi.

Why it is a gem
As the fleet of state-owned public transport buses start to age, governments are slowly moving to the PPP model where private companies are being roped in to operate bus services. Prasanna Purple has been at the forefront of capitalising on this, having entered into PPP agreements with city authorities in Indore, Bhopal, Pune, Surat, and also the Delhi Metro and the Delhi Tourism department.

“We have been with Prasanna Purple for a long time. This is a business that has great potential in a country like India where public transport will see big changes in the years to come and this is one company that will benefit from the change,” says Nirmesh Prakash, a partner with Ambit Pragma, which owns 68 percent of Prasanna Purple.

Besides this, the company has also ventured into corporate transportation, which is another big opportunity. Today, out of the 10 lakh buses that run in India, around five lakh serve corporate houses and schools. “The next step is to grow the business in areas of corporate and school transport in cities like Pune, Hyderabad and Bengaluru,” says Patwardhan.

The business itself is scalable and Prasanna Purple is using technology to bring in change. “I think the next change in transport is going to happen in the public transportation system and we will be the company that will drive in the change,” says Patwardhan who oversees the business using big data analysis. He and his team scourge through massive databases to correct inefficiencies. For instance, if a bus is speeding and skips stops, the driver can be immediately hauled up.

Why it was hidden
Almost 60 percent of the business for Prasanna Purple comes through city bus services, which is outsourced by local administrations. Over the last few years, the company has overly concentrated and invested in this area.

Risks & Challenges
The company operates in a segment where there is fierce competition from the unorganised segment. Besides, the sector is highly regulated and at the mercy of government policies that can go against private transport players. To grow in this business, the company requires huge investments to buy its own buses. It also faces competition from app-operated taxi aggregators like Uber and Ola, which are asset-light companies.