By catering to adults and babies, Kamal Kumar Johari's diaper business has grown its revenues five-fold in five years 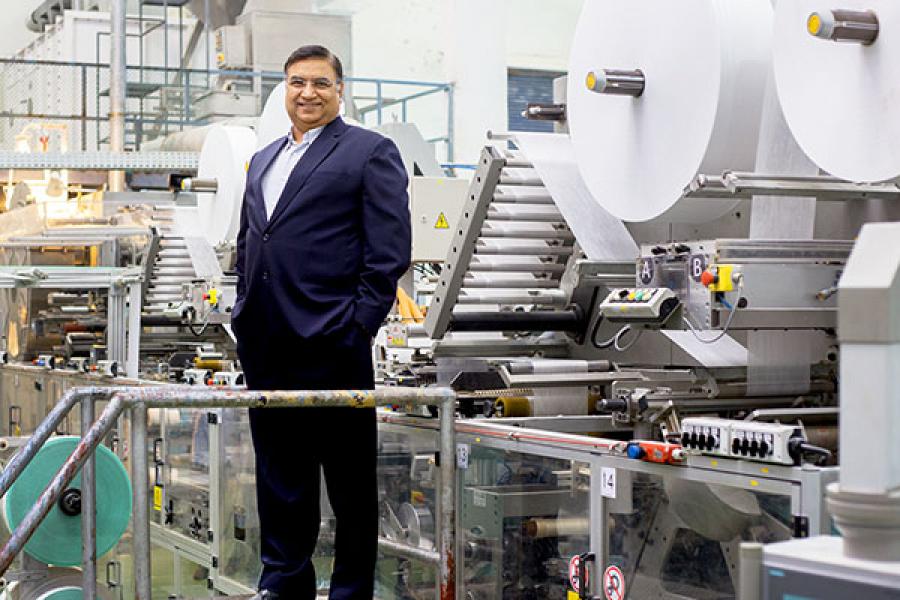 Fifteen years ago, shopkeepers in Mumbai used to laugh at Nobel Hygiene’s salesmen when they came to market adult diapers. “Will I wear an adult diaper under my lungi?” they would say with a guffaw. It took Nobel Hygiene’s founder and managing director Kamal Kumar Johari six months to sell a 25th of a container of 30,000 ‘Friends’ diapers, the first Indian brand in this segment. 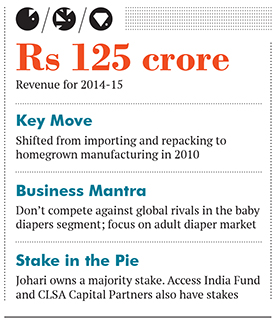 But Johari knew that there was a demand for his product. After failing to convince shops to stock adult diapers, he published a 16x2-inch advertisement in The Times of India. That very day, he got a hundred calls from people across the country, from Chandigarh to Bengaluru. Working professionals wanted diapers for their grandparents, and doctors wanted to prescribe them to elderly patients. He began selling a container a month; soon this doubled to two. Today, apart from selling regular disposable diapers for babies, Mumbai-based Nobel Hygiene sells 25 containers of adult diapers a month across India.

The person behind it
Johari, 55, is a first-generation entrepreneur who came to Mumbai from Varanasi in 1986 with a “suitcase and a wedding ring”. He was a science graduate from Banaras Hindu University who did his chartered accountancy in Mumbai. But Johari had one ambition: “Growing up, I always wanted to do business,” he says. And for 10 years, while he worked as a chartered accountant, he kept an eye out for the perfect business opportunity.

He got a shot at it in 1997, and started a small business that offered product distribution services to companies such as Beiersdorf (German personal care products giant that manufactures skin care brand Nivea), Pepsi and Samsonite. A couple of years later, he was approached by a disposable diapers company that wanted to distribute its product in Mumbai. “I saw that all its employees were leaving as the boss, a wealthy businessman, was more interested in making movies than selling diapers.
Some employees suggested that I start my own diaper business, and said that they knew the suppliers and sellers, etc.”

Johari jumped at the chance to diversify, and in 2000, he used his personal savings of Rs 50 lakh to start Nobel Hygiene with two diaper brands, Teddyy (for babies) and Friends (for adults). He claims that Nobel Hygiene has been profitable ever since. For nearly a decade, he imported diapers from Israel, Taiwan, Thailand and China and sold them under his brands. He priced Teddyy at about four to five percent lower than that of his competitor and then market leader, Huggies. (Today both brands are similarly priced at roughly Rs 500 for 48 small baby diapers on online marketplaces.)

By 2009, Johari decided to start manufacturing diapers to enforce high quality standards instead of relying on suppliers. Besides, by then, “any trader could go to Alibaba.com and start importing from China”. That’s when he set up a manufacturing plant in Nashik, Maharashtra, and bought two $5 million Italian machines.

Why it is a gem
In 2010, after Nobel Hygiene started manufacturing its own diapers, it began making Rs 20 crore in revenues. Today, with five Italian machines at its Nashik plant, the company’s revenues stand at Rs 125 crore. It caught the attention of Access India Fund in 2011, which invested $11.5 million for an undisclosed stake. “As a fund, we like first-generation, professionally qualified entrepreneurs,” says the private equity player’s founder and managing partner, Sangeeta Modi. “He (Johari) staked his entire net worth...and you know he’s really passionate.”

Johari claims to be a leader in the adult diaper segment with a 50 percent market share, and the fourth largest seller of baby diapers after Pampers, MamyPoko and Huggies. “Initially, we used to see a 50:50 revenue split between the baby and adult diaper range, but now the baby diaper business is going ahead because the market is growing at 25 percent year-on-year,” says Johari, adding that only six to seven percent of consumers in India use baby diapers and that “80-90 percent penetration will take 30 to 40 years”. A report from Nielsen pegged the Indian baby diaper market (a subset of the total baby care market) at Rs 1,200 crore in 2013, growing at 29 percent per annum.

In February 2015, CLSA Capital Partners invested $10 million for “under a third” of Access’s stake in the company, according to VCCircle. (Johari refused to give details, but says he continues to hold a majority stake.)

Why it was hidden
One reason why Nobel Hygiene is not well known is because the adult diaper business in India is still in a nascent stage. Johari estimates that in India, it is only worth Rs 300 crore. Modi adds that this segment is a niche market here but globally, it accounts for two-fifths of the  diaper segment ($9 billion as of 2011). It doesn’t help that a majority of Indians are not comfortable talking about adult incontinence.

In the baby diaper sector, most of Johari’s competitors like Huggies (by Texas-based Kimberly-Clark) and Pampers (marketed by Procter & Gamble) are well-known international brands with deep pockets. “For international competitors, the Indian market is only 1-2 percent of their total revenue. They come with a loss budget of 7-8 years,” claims Johari.

Risks and challenges
The challenge Johari now faces is how to make Nobel Hygiene’s brands of diapers as popular as those of his competitors. The business is capital-intensive and highly technical. “You can’t buy a shoelace or have a cup of tea for Rs 10, but you sell a baby diaper which is made entirely from imported (raw) materials, manufactured from a $5 million machine, for Rs 10,” he says.

There is also the possibility of more brands getting into the adult diaper space. That said, Nobel Hygiene is in a comfortable position: A 10-pack of Friends sells online at Rs 400 or Rs 40 per piece, almost four times the price per piece of the baby diapers.

And shopkeepers are no longer cracking jokes about the product. For now, Johari is laughing all the way to the bank.