CarTrade: On the fast lane in auto classifieds 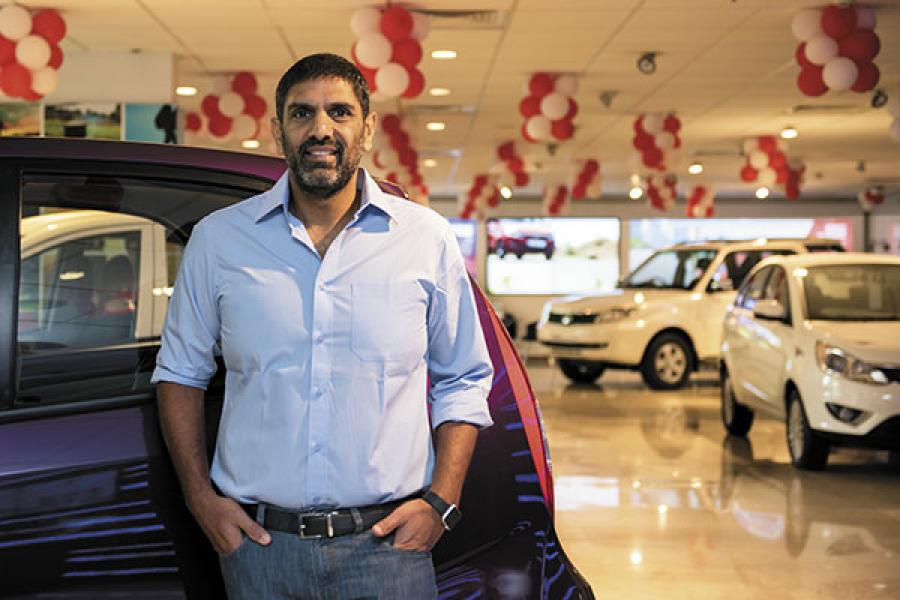 Image: Mexy Xavier
Vinay Sanghi launched CarTrade in 2010 with an initial capital of Rs 1 crore from his own pocket

For Vinay Sanghi, founder and CEO of CarTrade, the journey of entrepreneurship has been a ride like no other. Sanghi’s five-year-old auto classifieds portal, which started with a simple business idea of helping consumers buy and sell cars through the internet, has proved to be tempting for marquee global investors and consumers alike. 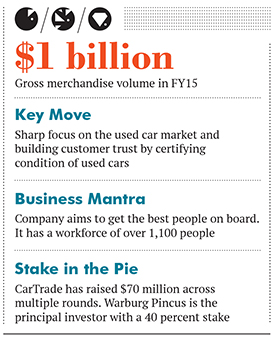 At last count, Mumbai-based CarTrade, which focuses on the sale of used cars, had an investor lineup that includes private equity major Warburg Pincus and JP Morgan, besides individual investors like Chip Perry, founder and former CEO of US-based AutoTrader.com—one of the world’s largest online automotive marketplaces—and Austin Ligon, co-founder, CarMax, which is one of the largest used car retailers in the United States.

“He (Sanghi) tracks several key metrics for his business, which his board and team agree are extremely valuable in managing CarTrade. Both the clarity of his approach and the alignment of his entire organisation to execute his vision are impressive,” says Nitin Nayar, managing director, Warburg Pincus, which led a $30 million (around Rs 185 crore) round of funding in the company in October last year. According to a report in The Economic Times in February 2015, the funding valued the company at $100 million (over Rs 600 crore). So far, CarTrade has raised a total capital of $70 million (approximately Rs 450 crore) across multiple rounds.

The online automobile classifieds platform also operates a business-to-business (B2B) auction portal called CarTradeExchange. The auction site, started in early 2010, is used by big dealers with unsold inventory and also about 110 institutional clients, which includes banks, NBFCs and insurance companies who look to dispose of repossessed cars and salvage vehicles. “They don’t know how to dispose of the vehicles, we provide them that platform,” says Sanghi.

The person behind it
Sanghi, who has done his BCom from Mumbai’s Sydenham College, comes from an affluent business family. The 45-year-old entrepreneur had early lessons in the nuances of the trade from his family’s auto dealership business, Sah & Sanghi, which has been in operation since the 1920s.

After learning the ropes at the family venture for seven years, in 1999, Sanghi started Mahindra First Choice Wheels Ltd, a retailer of multi-brand used vehicles, in a three-way joint venture with Mahindra Group and HDFC Ltd. “I spent almost ten years building the business (Mahindra First Choice) as founder-CEO. I was managing the board, investors, employees and customers. I looked at strategy and setting up of new businesses,” says Sanghi, who moved out of the operating role and board position of the company in 2009 to start CarTrade. Mahindra First Choice currently has over 500 outlets across 270 cities in India.

The experience he gained from his first venture proved to be handy later in his career. “I realised that one of the things I’m good at, is bringing people together and building a team, be it investors or the right talent,” says Sanghi. Confident of his skills, Sanghi launched CarTrade in January 2010 with an initial capital of Rs 1 crore, his personal money.

Why it is a gem
Despite operating in a fiercely competitive marketplace, CarTrade has managed to maintain an edge over its ecommerce rivals. In the five years since its inception, the company has been developing, testing and rolling out key components of an online ecosystem dedicated to cars. There were issues of trust and financing in the sector, and the company addressed those. It put together a certification method to inform customers about the condition of a used car. CarTrade has 200 automobile engineers, on its payroll, who certify cars on its website.

Traffic to CarTrade’s website is twice that of competition. The portal gets 5 million unique (excluding its Android and iOS apps) visits per month and its listings number 1.85 lakh, claims Sanghi. Key competitors include OLX, an online classifieds marketplace for used goods, and automotive portal CarWale.

Sanghi points to the scalability of the industry—approximately three million used cars are sold annually in India. “It’s such a huge market, but consumers don’t know how to go about buying used cars. Currently, India has about 15,000 used car dealers. But, it is a fragmented market, the options available with the dealers are limited in terms of variety of models, colours and price points,” he says. Sanghi shies away from disclosing the company’s revenue due to investor confidentiality. However, he says CarTrade’s gross merchandise volume (GMV) was about $1 billion in FY15, adding that the company plans to double this figure by the end of the current fiscal. (Typically, the GMV of an ecommerce company is the value of all goods sold on its platform. Online retailers in India don’t share their revenues but offer the GMV figure to show the firm’s financial health.)

Why it was hidden
Even though the used car market offers immense growth potential, new car sales are generally perceived to be indicative of the robustness of the auto sector. The fact that 70 percent of CarTrade’s business is focussed on the used car segment kept the company’s profile low in its initial years.

There are just four to five major players in the auto classifieds segment right now and it is only in the last one year that investments in such startups have picked up.

Risks & challenges
In the overcrowded ecommerce industry, where companies clone services in no time, it becomes critical to differentiate offerings, especially in a category influenced so heavily by consumer and market sentiment. And, Sanghi is fully aware of the competition he’s up against. “The biggest challenge for us right now is how fast we can build the brand. We are spending a significant amount of money on advertisements and marketing to make CarTrade a household name,” he says.

Having built a solid foundation for growth, Sanghi now seems set on the fast track to success.