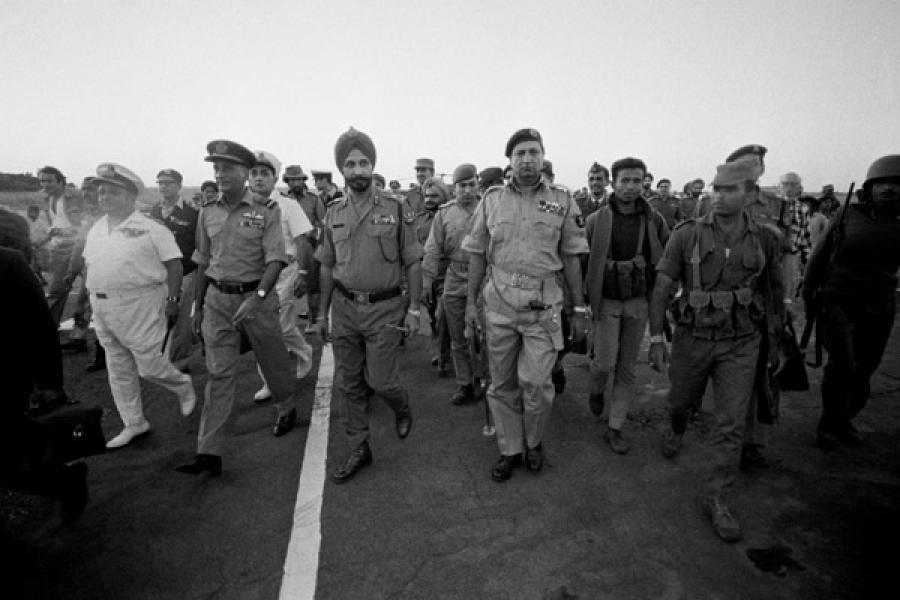 In international diplomacy, every country speaks the language that is advantageous at the moment. Words are one thing; actions quite another.

This universal truth came to the fore in the form of India’s reaction to the attacks on Libya by Allied Forces. It chose to abstain from voting at the UN Security Council on the question of military action, but back home roared its condemnation once the attacks took place. “What is happening in a country, within their internal affairs, no external powers should interfere in it,” Finance Minister Pranab Mukherjee said.
Good advice. Something someone forgot to give Indira Gandhi, Pranab Mukherjee’s first boss, in 1971. During her regime, India warred with Pakistan to help split it into two countries.
Then there is Sri Lanka. After the government in Colombo carried out a genocide against Tamils in 1983, India armed and trained the terrorist group, Liberation Tigers of Tamil Eelam, on Indian territory, and sent them back to Sri Lanka to escalate the civil war. India’s concern for Tamils was only part of the reason for this; it also wanted to thwart American attempts to set up a naval base in Trincomalee by squeezing Sri Lanka. In 1987, it pushed a peace treaty on President Junius Jayawardane and LTTE and sent its army to implement that shaky accord. Indian soldiers virtually ran the north of Sri Lanka for three years until 1990.
In November 1988, India carried out Operation Cactus to foil a coup d’état against the government of Maumoon Abdul Gayoom. Indian Prime Minister Rajiv Gandhi despatched 1,600 troops and a couple of naval frigates. The mere presence of Indian soldiers ended the coup.
Go back in history and there is enough to suggest India ticked off its neighbours by commenting on their internal affairs. In 1950, when China invaded Tibet and tried to assert its sovereignty over the region, India began expressing ‘concerns’ over what it saw as the destabilisation of South Asia. Moa Zedong was irritated by this, which led to the deterioration of the previously good relations between the two nations, according to a paper by Professor Chen Jian of the University of Hong Kong. Mao’s officials told India that it had “treated a domestic problem of the Chinese government, namely, the exercise of its sovereign rights in Tibet, as an international dispute calculated to increase the present deplorable tension in the world.”
India signed a peace treaty with Nepal in 1950 that was seen in the land-locked nation as an intrusion into its sovereignty. Two years later when the Communist Party of Nepal tried to seize power with Chinese support, India intervened under terms of the treaty. It sent a military mission to Nepal, which was resented by most Nepalis.

One may wonder why India advises the US and UK to lay off other countries’ affairs when it frequently dabbles in its neighbours’ politics. Perhaps it doesn’t want the Western powers to suffer the same ignominy that it suffered wherever it intervened. LTTE terrorists eventually turned against India. Bangladesh has become a breeding ground for cross-border terrorism. Nepal is joining Pakistan and China in its hostility towards India.
But then, the other eternal truth in international diplomacy is that nobody learns their lessons.

Tweets by @forbesindia
SAP India's Peter Gartenberg: I Like to Get Bad News Fast