Swami Parthasarathy’s Vedanta originates in the Upanishads, but his teachings apply to boardrooms as well 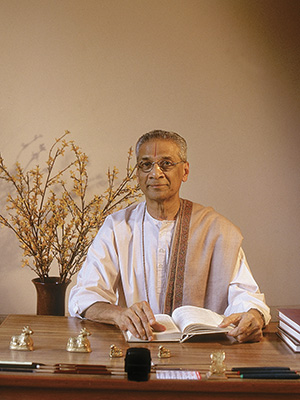 More than 3,000 years ago, pupils sat down with their gurus in the seclusion of Indian forests with the intent of learning Vedanta, which in Sanskrit means the end (anta) of knowledge (veda). Their discussions on the nature of the mind, the intellect, the senses, the world, and of cause and effect, were transmitted through oral tradition first, and written in a series of dialogues later; these dialogues and ancient texts went on to become the Upanishads, derived from the words upa (near), ni (down) and shad (to sit)—as explained by Dr S Radhakrishnan in The Principal Upanishads.

Eknath Easwaran in The Upanishads, a translation, compared these pupils to adventurers. But unlike mountaineers or explorers, these seekers wanted “not so much to know the unknown as to know the knower”. To put it simply, who is it that wants to know? The process helps the seeker understand the relationship of the self with the rest of the world and deal with it in contented ways.

Like John Sutherland’s frustration with his new motorcycle in Robert M Pirsig’s classic Zen and the Art of Motorcycle Maintenance, this relationship is often not understood. But the philosophical narrator in the story is so attentive to his old motorcycle that he detects even the tiniest of variations in it and attends to it.

Forty years ago, A Parthasarathy, a graduate from University College in London, quit his corporate career to study and teach Vedanta to students at Harvard and Wharton universities, employees at Microsoft and Nasa, and economists and politicians at the World Economic Forum and the World Bank.

According to him, Vedanta is not a retirement plan but a technique for dynamic living. The Indian government has accorded his Vedanta Cultural Foundation, which runs the non-profit Vedanta Academy in Malavali, Pune, the status of a Scientific and Industrial Research Organisation (Siro).

At six feet, the 85-year-old Swamiji, as his students call him, cuts an imposing figure. He still plays cricket and follows a daily schedule of jogging and yoga. Clad in white, and sporting a thin vermillion streak across his forehead, he casually mentions that he has maintained a 32-inch waistline for 60 years.
“Vedanta teaches you to use the intellect to hold the mind in its present job. You do that by developing the intellect,” he says.

While Parthasarathy’s teachings are derived from the Upanishads, his language belongs to boardrooms. For example, he says the formula for efficiency and productivity has three Vedantic elements—concentration, consistency and co-operation. In The Katha Upanishad, a parable of the chariot compares the mind to horses, the body to the chariot, and the intellect to the reins which, through reason, governs the impulsive and reactive mind.

Larry Moon, chairman and CEO of Sandstone Group, took to Vedanta in 2007 and has since been able to make decisions quickly and consistently. “I attribute my studies to improving the skills I need as a leader. My clarity of purpose is sharper than it has ever been in my life,” he says.

He continues, “I find that I stick to my beliefs more often and have a deeper conviction about them than I ever had in the past. That constancy has led me to make decisions to keep pushing the envelope, when in the past I would have been more conservative, and stuck to what I knew would work for fear of failing.”

Reza Etedali, chief executive of retail investment advisory firm Reza Investment Group, attended his first Vedanta seminar in 2009 for members of Young Presidents’ Organization (YPO), an uber elite global network of C-level executives aged 45 or below. “The essence of Vedanta for business people is to throw yourself into the action and to fully play the part, but not to become so involved and attached to the outcome that your judgement gets impacted and you lose objectivity,” he says.

Etedali says the practice [Vedanta] has helped reduce his negotiation time because now he understands the other person’s point of view better. “Business schools teach you the mechanics of negotiation. They don’t teach you how to use your mind and your intellect to transact. It’s all about case studies. You don’t get to study the person or learn about how your inside works and how you relate to the world,” he says.

Now he’s more conscious of putting the other person’s interests in front early on, so that both sides have a win-win situation. “The past year, I can attribute [to Vedanta] about $100 million worth of deals because of this approach,” Etedali says.

He’s also been able to walk away at times after months of negotiations because he’s willing to let go of a deal if the price is not fair, rather than spend more time negotiating. Though, most often, he has found that people have come back to sign the contract.

Swami Parthasarathy feels that most business schools teach students to manage budgets, people and projects, but not themselves, a skill essential to achieving better work relations, higher productivity and stress-free fulfillment of goals that are mindful of others. He often cautions [people] about the mind’s natural tendency to slip into memories of the past and anxiety for the future, a habit that impacts current action negatively.

Etedali (of Reza Group) cites the game of tennis as an example. “When the pressure to win a match becomes intense, you almost always lose.” He says the trick is to practise hard, and throw yourself into the game without worrying about the outcome, and Vedanta teaches you that kind of detachment. That’s an important lesson for someone who routinely negotiates transactions in the $100-million range and whose clients include the likes of General Electric, Cigna, and ING Realty.