How An Israeli Organisation Could Help Accident Victims In India 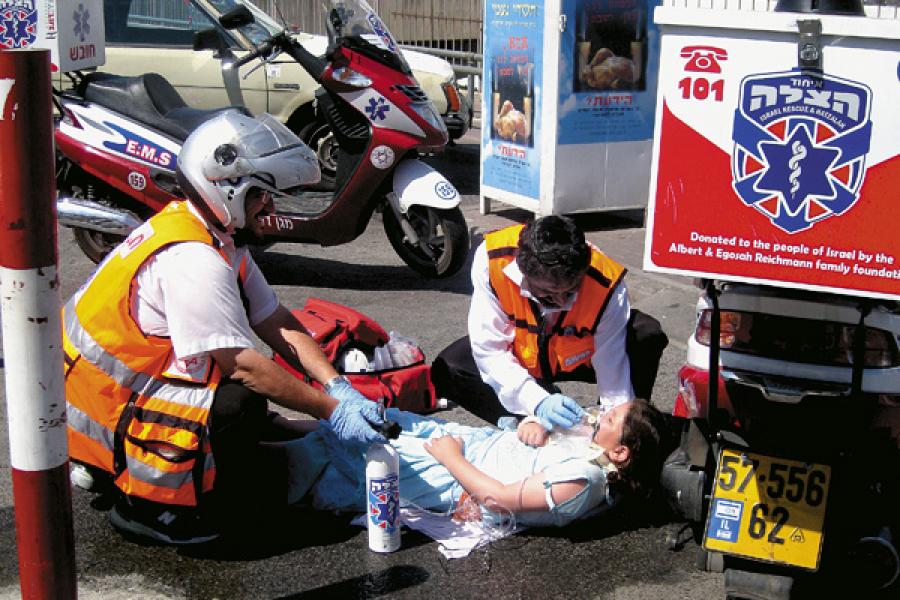 HANDY HELP United Hatzalah volunteers give fi rst-aid to an accident victim in Israel. The organisation has brought Arabs and Jews together in the trouble-torn region

On a bright Sunday evening, in a suburb near Chennai, the highway to Sriperumbudur, a manufacturing hub, was almost empty. There were a few men standing by a line of shops, some bicycles, a couple of autorickshaws, and a speeding Ford Ikon. Suddenly, the car swerved to the right, climbed the platform that divided the road and crashed against a lamp post. The bonnet squeezed into a confusion of metal and wires. Two web-like patterns formed on the front glass from the impact of the passengers’ heads.

A woman, her face covered with blood, jumped out of the car and dashed away, then turned back and ran towards the car shouting “Anna!”. A man, with streaks of blood flowing down his face, limped out of the driver’s seat. A crowd gathered around the car and pulled an old woman from the rear seat. She was unconscious, unaware of the confused activity all around. A cyclist from the other side of the road rushed to the scene with a towel; another man came with a few packets of water.

Several minutes passed. Some got down to discussing how it happened, and others what needs to be done. Eventually, someone hailed two autos, helped the couple into one and lifted the old woman into another. The commotion and the confusion eventually subsided, and people went back to their routines.

Such accidents are common on the highways in India. In 2010, 1.6 lakh people died in road accidents and 30-40 times that number were hospitalised with serious injuries. In most cases, the response from the bystanders is confusion. This goes against the rule books which instruct people at such spots to call an emergency service, secure the accident spot from the crowd and not let lay people handle the victims.

But emergency care is at a nascent stage in India. Demand outstrips the supply of ambulances and the crowded roads invariably delay their arrival. Often death strikes during this window. About 30 percent of deaths in accident spots are estimated to be on account of lack of pre-hospitalisation care. What happens between an event—it could be a road accident, a fall or severe chest pain—and the arrival of the ambulance is critical. Across the world, emergency care experts have been struggling to find a way to send expert help more quickly.

An Israeli organisation, United Hartzalah, might have just cracked the code. The idea is simple; it depends on a network of volunteers and smart use of technology. The organisation recruits volunteers, gives them 100 hours of training, equips them with a kit containing medicines and devices that fit on a two wheeler, and lets them get on with their normal lives. When an emergency strikes, it locates the volunteer closest to the scene and alerts him. The volunteer rushes to the scene and provides first aid. There are 1,700 volunteers across Israel and they arrive at the scene in a matter of minutes. Eli Beer, who founded United Hartzalah, says he is aiming to crunch this number to 90 seconds.

United Hatzalah has not only saved hundreds of lives, it has also had a positive impact on the social fabric. Recently, Al Jazeera aired a documentary on how the organisation brought Arabs and Jews together in a region that’s defined by extreme hatred. Mark Gerson, co-founder of Gerson Lehrman Group and chairman of United Hatzalah, says right now they have an oversupply of people wanting to volunteer in Israel. Beer and Gerson hope to replicate the model across the world, including India.

However, India might turn out to be different, given its size and background. Israel is a small country, and its population—76 lakh—is smaller than that of Hyderabad. What works in Israel might not work in India. But the size of the countries shouldn’t matter, says Gerson. The ideal way to go about it would be to take one city at a time, get the fundamentals right, put the system in place, and scale up over time.

In fact, in Brazil, they have started with Sao Paulo. The experience has been good—the volunteers were easy to come by and the technology works as well as it did in Israel. “We are looking to assist the Sao Paulo group to expand in Rio de Janeiro. Operational plans are already underway. United Hatzalah is assisting in a similar programme in Panama as well,” says Beer.

A bigger challenge in India will be in recruiting volunteers. Israel has a long culture of volunteerism, strengthened by mandatory military service. In Brazil, they were approached by members of the Jewish community who were impressed with the organisation’s operations and wished to replicate it. The community leaders made speeches and distributed flyers, says Beer. Word of mouth, however, was the most effective outreach tool. “There were more volunteers than [we] were able to initially accept,” he says.

But India is different from both Brazil and Israel. However, Beer doesn’t think that will matter at all. In fact, the two wheeler and mobile penetration in the country make the model adaptable. “The groundswell of good-hearted people wanting to help their communities is universal,” he says.  “Given a chance to save a life, who will say no?”