The sound of (India's) music 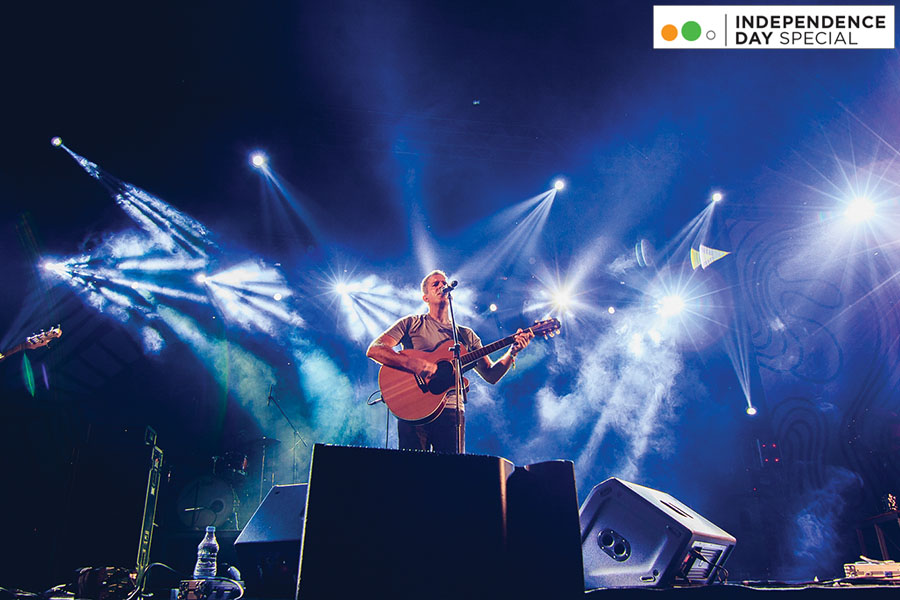 Indian rock had found its footing and bands like Indus Creed were digging it
Image: Amborishnath.com
My parents’ generation was the last of the colonial crossover tribe.

Just before Partition exacted its savage toll on the hapless pawns of imperial machinations, my mother’s family swifted themselves out of Peshawar, leaving behind their material possessions and restarting their lives in Delhi. My parents met on the Delhi English-theatre circuit. My father was an announcer on All India Radio, when he wasn’t on stage. My mom handled production-related stuff in the wings. They moved to Bombay when they hitched up, and jumped into the city’s burgeoning advertising scene. English was their first language, and it became my brother’s and mine too. Growing up in South Bombay in the ’70s we had little reason to speak in any other tongue (the Goan maids who took care of us while our folks were at work all spoke English).

My father’s bookshelves were stuffed with the works of Western writers: PG Wodehouse, Joseph Conrad, Robert Ludlum, Isaac Asimov, John Irving. I devoured them, and exulted in their use of imagination and language. I wallowed in the ideas of Bertrand Russell and Ken Kesey. Our movie outings consisted almost exclusively of Hollywood entertainers—The Magnificent Seven, The Great Escape, Mackenna’s Gold, Butch Cassidy and the Sundance Kid.

As soon as my older brother started college our music tastes began to be shaped by the British and American rock albums he brought home. I spent hours fantasising by the turntable as LP after LP wore down their grooves. I pictured myself on stage before an audience of thousands, fronting a band like Deep Purple or Santana or The Who. I connected with the sardonic wit of Steely Dan and Frank Zappa, who referenced things I had no clue about, but sounded so cool that they resonated far more deeply than the Amar Chitra Katha comics I grew up on.

I was the archetypal colonial hangover: Born and raised on the Western (and Westernised) fringe of independent India, educated in a public school (as our colonial masters bafflingly called private institutions), bred on the arts, literature and philosophies of distant lands that felt closer to home than the not-so-distant suburbs of the very city I was growing up in. It’s those ideas that fed the music I created with the rock band I joined, itself a career decision that was more American rebel than well-bred desi lad.

For close to 15 years I made a British and American kind of music. At one point we experimented using an Indian instrument, an act that was consider ‘pseudo’ at the time. The song, ‘Pretty Child’, went on to become our biggest hit. We went further, convincing our favourite multi-percussionist, Taufiq Qureshi, whose brother Fazal had played tabla on the album recording of ‘Pretty Child’, to come on tour with us. He brought a sound and style that bridged our obverse upbringings—ours liberal Western, his traditional Indian. Though the audience loved it, it was still an anomalous mix—an Indianising of a Western sound, rather than a seamless interleaving of the two forms.

By the time the century turned, so did the tide. Musicians in India were becoming less and less encumbered by an alien legacy. Indian pop music had begun to adopt a sound and an image that was unpretentiously and unashamedly local. Indian Ocean, a band that had been blending rock and hinterland poetry to small audiences, found sudden national acclaim with their soundtrack to the Aamir Khan-produced film Peepli Live. They began to headline large music festivals, once to a crowd that chose to watch them over a well-known American heavy metal band playing at a stage further down the festival grounds. 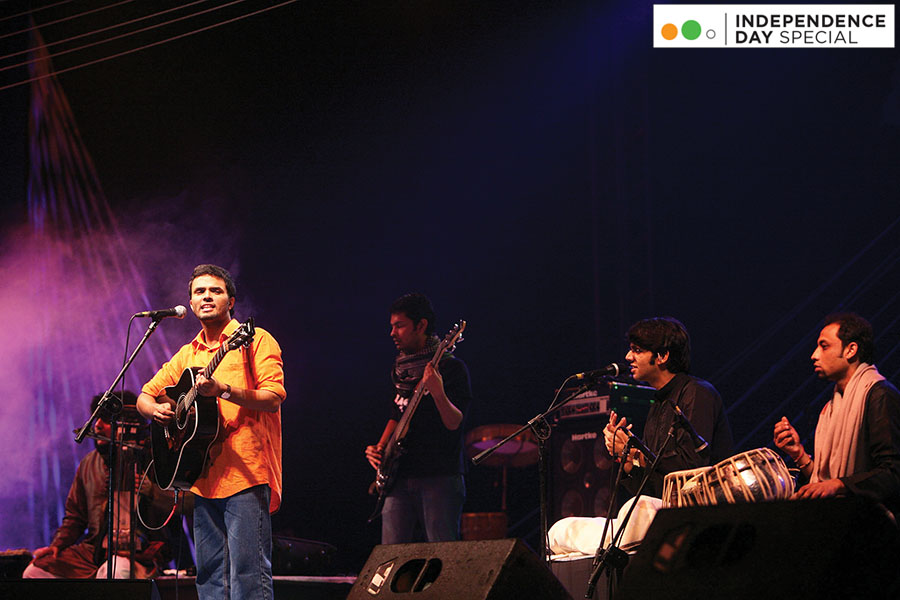 Bands like Advaita ensure the sound is Western and unequivocally Indian at the same time
Image: Jyoti Kapoor/ India Today Group/ Getty images
Indian rock had found its footing and people were digging it. Expat Indians jumped on the wagon too. Other Hindi-language artists began to gain recognition: The Raghu Dixit Project, and Advaita deftly wove together Indian folk and classical sounds with drums, guitars and synthesisers. The sound was Western… but unequivocally Indian at the same time.

As the Hindi-isation of rock and pop was taking form, across the country regional-language bands were busy carving out their own homegrown niches. Bangla rock had been a sound in the making for a while, with bands like Fossils, Cactus, Prachir, Mfour and Bhoomi claiming sizeable fan followings. The northeast, a region rich with a highly musically aware people, produced multiple indigenous-tongued artists, including Warklung and Shades of Retribution from Assam, Rough Road, Rip Rap and Snow White from Meghalaya, and Ruben Masangwa and Eastern Dark from Manipur. Nagaland’s Tetseo Sisters continue to spread their delightful folk sound. 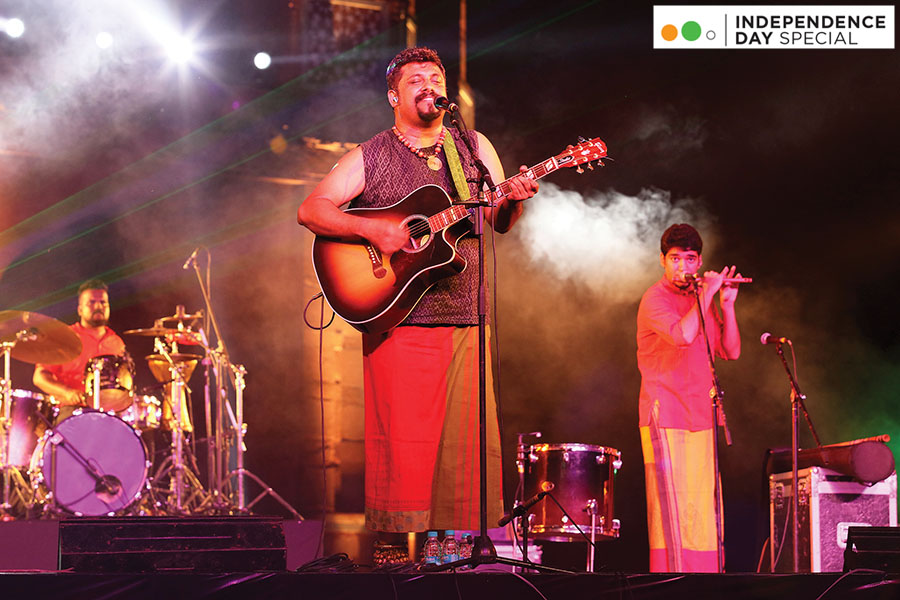 Raghu Dixit weaves Indian folk and classical sounds with drums, guitars and synthesisers
Image: Anand Prakash Gupta/ Getty images
Southern bands were equally proud of their cultural origins, and employed the mathematical wonders of Carnatic music. Bands like Yodhakaa, Agam and Motherjane infused their songs with the languages, scales and modes unique to the region south of Kanara. Kerala’s record-scratching, hard-riffing alt-rockers Avial were particularly skilful in blending their ethnic heritage with their occidental influences.

India’s non-traditional, non-film music universe is now richer and more diverse than it’s ever been. The EDM craze that began in the affluent clubs of India’s metropolises found its way first to urban chawls and slums and then to the rural areas. You’d be hard-pressed to find any respite from mind-numbing bass and drums anywhere in India these days; even the most remote village boasts its own DJ with an impressively up-to-date library of songs. But the merging of east and west can often result in some pretty bizarre cocktails: The slum that abuts my apartment building frequently blasts Sai Baba bhajans set to pumping electronic beats.

One of the earliest electro-producers to recognise the mass appeal of big beats set to Indian sonic and visual kitsch was a DJ/producer from Ahmedabad. Udyan Sagar, or Nucleya, as he’s better known, devised his own unapologetically desi electronic sound that quickly found its way to the sound systems of hipster festivals, corporate shows and village melas. Nucleya’s live concerts feature humongous garishly coloured mythological characters that backdrop his music, itself the sonic equivalent of that ethnic opulence. While the base of his art is entirely Western, the form it takes on is undeniably Indian.

The bland populism of electronic dance music created an opening for another, more artistic, beat-driven form: Hip-hop. While EDM is content to remain within the safe boundaries of banal melodies, predictable arrangements and vapid phrases, hip-hop’s lyricism provides a more expressive and creative outlet for boundary pushing—musically and topically. Rappers and hip-hop artists in various Indian languages are rapidly proliferating across the country. What began with Yo-Yo Honey Singh’s narcissistic hedonism has evolved into poetic cries for social justice and rebel yells, as evidenced in the verses of rising hip-hop stars like Naezy, Divine and MC Prabh Deep. The beats could easily be mistaken for something off a Jay-Z or Kanye West album, but the words and context are unmistakably personal and local.

The other stars in ascendance are the young bedroom performers amassing huge followings with their talent-contest renditions of Bollywood songs. The term ‘YouTube sensation’ has become nearly as common as ‘pop star’. To be fair, a trend that began in small-town homes has become much slicker in look and sound. Record companies, music producers and artist management agencies vie these days for the attention of the established ones, some of whom boast followers upwards of 2 lakh. Shraddha Sharma, one of India’s early internet darlings, is one example. Others include the US-based Vidya Vox, with 47 lakh subscribers, Shirley Setia, who moved from Auckland to Mumbai to exploit her 23 lakh-strong fan base, and Aakash Gandhi, a pianist who records Richard Clayderman-esque versions of Bollywood hits featuring dulcet-voiced crooners to the delight of his million-plus viewers. The colonial divide is further obviated by the internet’s fence-breaking ways: Setia’s online popularity was no doubt instrumental in US dance producer Marshmello’s decision to appear in a 42-second video with her, hip-synching to the song ‘Kala Chashma’.

Another platform that’s increas-ingly thinking global and acting local is music theatre. Until recently it was all about recreating templates of such international hits as Jesus Christ Superstar, Beauty and the Beast and The Sound of Music. But the runaway success of the stage adaptation of Mughal-e-Azam, with large-scale set design, elaborate costumes, grandiose lighting and skilful choreography, has ushered in a new trend. This October will see the premiere of a new musical theatre production that is entirely Indian. Mumbai theatre veterans Rahul da Cunha and ‘Bugs’ Bhargava Krishna will be unveiling a play about a singing contest called Sing India Sing (full disclosure: I play a role in it) under the ambit of Kumar Mangalam Birla’s Aadyam series. Neither shy on scale nor production ambitions, the play will feature an entirely local story starring an all-local cast supported by a wholly Indian crew.

The cloak of colonialism has a few threads left but the weave has been mostly replaced by a far more colourful tapestry of pan-Indianness.

Tweets by @forbes_india
Escorts: Lord of the field
As the club season kicks off in Europe, here's a look at some of the top transfers