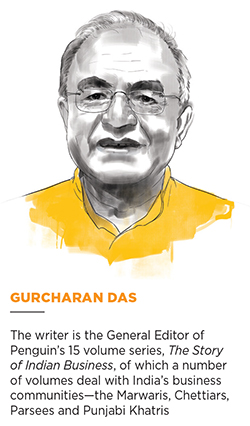 Unlike the mood of diminished expectations in the West, ours is an age of rising expectations. India has risen in the past quarter century on the back of liberal economic reforms. Sixty-four countries, however, made the same reforms as India, but why did India become the world’s second fastest-growing economy? I am not sure if anyone really knows, but my own ‘politically incorrect’ answer is that if you make reforms in a society where there are groups who know how to accumulate and conserve capital, your reforms will have a bigger bang. Historically, India is fortunate to have had its Vaishya or Bania business castes—the Marwaris, Chettiars, Gujarati Bhatias, Sindhis, Khojas, Jains, North Indian Banias, Punjabi Khatris/Aroras, even Parsees, and more—and they have played a major part in India’s growth story. Not surprising then, that year after year, two-thirds of the surnames in the Forbes list of Indian billionaires are Vaishya. Our much-maligned caste system may have actually given us a competitive advantage.

There are many reasons for the extraordinary and continuing success of our ancient trading communities. I shall focus on three: An enormous appetite for risk, the central place of trust (sakh) in their business culture, and a family support system that grooms entrepreneurs. Let me illustrate with stories from one community: The Marwaris.

The virtue of risk taking
The business world rewards those who take risks. ‘You don’t want to compete with a Marwari!’ is the wisdom of the bazaar, partly because of the community’s astonishing risk-taking ability. GD Birla’s colossal success in the market for jute futures during World War I was the result of his extraordinary stomach for risk. It laid the foundation for the great Birla industrial empire.

Less well known is the remarkable story of Ramkrishna Dalmia, who came from arid Rohtak in Haryana, not far from Rajasthan—the homeland of the Marwaris. Although his great-grandfather had been wealthy, Dalmia grew up in penury in Calcutta during the Great Depression of the 1930s. He was 22 when his father died and had to support seven persons in a single room, which he rented for Rs 13 per month. Dalmia was young, adventurous and wanted to get rich quickly. He had speculated in silver, lost, and suffered the humiliation of defaulting on his debts.

Declared insolvent, he was persona non-grata in the marketplace when he received a cable from London informing him that the market for silver was set to rise.

Dalmia rushed to the bazaar and entreated his friends and associates to buy silver, but he was spurned. Friendless, he went to a wealthy astrologer (who had predicted that Dalmia would one day grow very rich) who agreed to purchase silver worth £7,500. Dalmia jumped on a tram and sent off a cable from the General Post Office. But the next day, during his daily dip in the Ganges, he was informed that the astrologer refused to honour the transaction. On returning home, he found a cable confirming the transaction along with the bad news that the market had gone down. He was in serious trouble.

The market, however, turned very quickly in the next few days and since he had not squared his account, he suddenly found that he had made a significant profit. A prudent man would have booked the profit, but Dalmia was a risk-taker. He stole his wife’s only ornament, pawned it for Rs 200 and made a fresh bet through another agent for £10,000. The silver market rose again and he doubled his capital, which he used to buy more silver. Soon his profits had risen seven-fold. 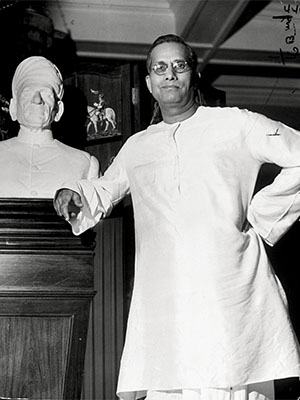 Image: Getty Images
GD Birla, whose risk-taking ability brought him much success in the market for jute futures, laying the foundation of the Birla business empire

Dalmia wanted to unburden himself and he confided in his mother. She ordered him to square off immediately, retrieve his wife’s ornament and never again earn from stolen capital. She told him to get a job, earning Rs 50 per month, on which they could live comfortably. He complied with his mother’s wishes, cabled his agents to book his profits. But as luck would have it, his cable got garbled in transmission; the market rose again dramatically, and now, his profits were fifteen times his capital and he had become a very wealthy man, which laid the foundation of a vast industrial empire. When I was young, the names Tata-Birla-Dalmia were mentioned in a single breath.

Dalmia seems to have employed intuition, not unlike George Soros, when he bet against the British pound, but most Marwaris will tell you that they have a method and an art in managing risk. Despite their rationalism, the truth is that luck plays a big part.

Trust is at the heart of it
One of the lessons from Dalmia’s story is the central place of trust in business life. When Dalmia defaulted on his debt, he broke a promise, and the market punished him swiftly. By losing the trust of his peers in the market, he turned from a somebody to a nobody, a terrible thing to happen to any human being. In the world of Marwaris and Banias, the word for trust is sakh and it is linked closely to honour. It is a crucial indicator of a merchant’s standing. Sakh is at the heart of creditworthiness and business integrity and means much more than wealth and financial strength. It is acquired through an unblemished record in honouring obligations and being generous to the needy.

The legendary cotton trader Ramvilas Poddar began as a humble broker in raw cotton but soon reached an eminent position in the bazaar by quickly building a reputation for honesty and acquiring sakh within the community. This helped Poddar set up an independent brokerage and encouraged older and established firms to entrust their money to a relative newcomer in the bazaar.

GD Birla confirms the importance of sakh. In describing his life as a jute trader, he tells us that most of his transactions in buying raw jute or selling the finished product were based on the trader’s word. The commodity fluctuated on a daily basis and there were often great swings in the price between morning and evening. Sellers and brokers presented their offers on a rough sheet of paper in the morning, but the mills made their decision in the evening. The offers were invariably honoured no matter how the market had moved during the day.

Raju Kanoria, who also started his life in the jute business and went on to become president of Ficci, the prestigious chamber of commerce, corroborates that at the East India Jute and Hessian Exchange, prices were confirmed through a handshake. He adds that a similar system based on trust operated in the case of finished stock. The jute mills held finished goods in stock for buyers, against Pucca Delivery Orders (PDOs) made months in advance and the mills never dared to default on them. When Kanoria was eighteen, he had the good fortune to meet GD Birla, whose advice to the young man was ‘to trust people if you want to succeed’. 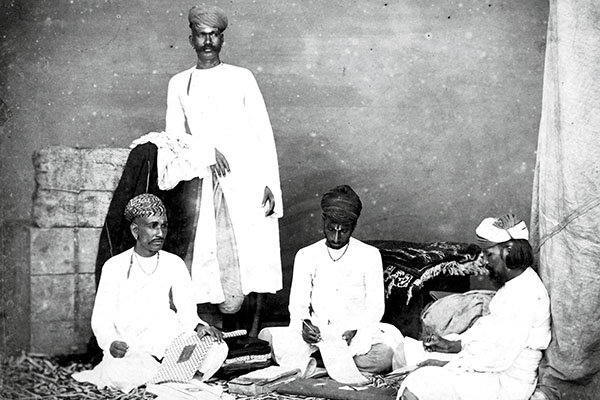 Image: Getty Images
Marwari cloth merchants in India in 1870. The trading community has made managing risk, an art

The visible embodiment of sakh is a negotiable financial instrument called the hundi. A centuries-old Bania innovation, it was akin to a bill of exchange: It allowed a merchant in a remote village to remit or receive large sums of money on the basis of trust. A merchant from Gujarat, for example, who sold his raw cotton in distant Bombay could, instead of receiving payment in cash with all the risks during transit, take a hundi of the equivalent amount drawn by the buyer in his favour. He could present the hundi to an agent in his village and collect his money there. This made it possible to transfer funds without having to physically carry money. While the hundi began as a remittance facility, it evolved over time for credit purposes: The lender extended the loan amount at a discount on the value of the hundi and subsequently encashed it at par. In short, the hundi became a negotiable instrument.

We forget that at the heart of the market system is trust between self-interested strangers who come together to exchange in the marketplace. The reason that buyers and sellers are able to trust each other is, in part, due to the underlying belief that the average person acts honestly—that he or she wants to do the right thing—and this gives people a sense of safety when they transact. This is why a seller readily accepts a cheque from a buyer. Millions of transactions in the global economy are conducted daily, based on trust without resorting to contracts.

Community Support System
Indian capitalism has always been family-based, and the extended family and community has always provided strong support.

Not only Marwaris, but other commercial communities apprenticed their young early. They provided them with rigorous training in technical skills. When they came of age, they were encouraged to set out on their own. They gave them venture capital from the corpus of the family or the community. They expected it to be returned after the person made a success in order to become capital for the next generation. When the entrepreneur travelled, he could stay in guest houses (called basas in the case of the Marwaris), run by their community which attended to the traveller’s commercial and other needs in a strange town.

There was also a system of checks. The young person who travelled invariably left his family behind in the care of the community elders, which deterred a young man from absconding abroad with the community’s capital. The community was always extremely mindful of its reputation, for one rotten egg could spoil the reputation not only of the family, but also of the community. This ethic continues even today.

The legacy of India’s business communities is to have historically harnessed the country’s great productive capacity. On the back of economic surplus generated in the home market, they built a rich trading history along a 5,000-mile coastline. As a result, India commanded as much as a quarter of world trade during certain periods and had a positive balance of trade with the world throughout history until the Industrial Revolution.

Tweets by @forbesindia
There is a clear and present agenda for skills: Manish Sabharwal
Biocon, Syngene looking at overseas listing