Aruna Sundararajan: IAS Officer who thinks like a Businesswoman 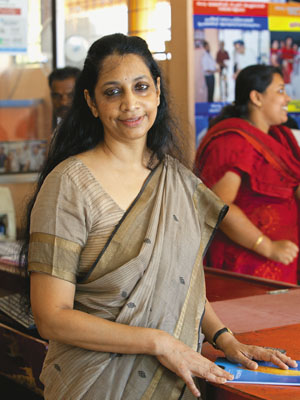 In 2003, Tulip, then a fledgling company, applied for a computer networking project in Kerala. It had no experience implementing big projects, having just entered this segment after starting out as a re-seller of software. Tulip's technology was untested in the dust and grime of the real world. Yet it was bidding for a state government project—a project it seemed to have no chance of winning.

Any bureaucratic machine is primed to be risk averse, avoiding any decision without reams of documentary evidence to justify it. Established players had a chance. New players didn’t.

So Colonel Hardeep Singh Bedi, Tulip’s chief, was pleasantly surprised when the Kerala government took an unconventional route. It asked the bidders to set up pilot projects, and chose the ones that performed best. Tulip passed the test. That one unlikely decision, by an IAS officer who chose to think different, gave the company a big push. Its revenues last year were Rs 2,700 crore.

The project that gave Tulip its kick-start was Akshaya, and the IAS officer in charge was Aruna Sundararajan. “She was an IAS officer, but she worked like a business person. She always had that trait in her,” says HS Bedi. That trait—the ability to balance public good with private enterprise—helped make Akshaya one of the best thought-out and best-executed state-run projects in the country.

It offers lessons for any project whose success hinges on how well government, business and citizens work together, like India’s current effort to create the world’s largest biometric identity programme.

Akshaya started as an e-literacy (computer skills) project in Kerala’s Malappuram district, quickly spread across the state and evolved into a service delivery centre for all citizens. At least one person in each of Kerala’s 3.25 million families became computer literate through Akshaya centres. When the government launched a scheme to provide life insurance coverage to the poor, the network of Akshaya centres helped ramp up registrations quickly. More recently, 75 percent of all UID (Unique Identification number) registrations in Kerala happened in Akshaya centres. What’s impressive is the way Akshaya scaled up and endured, says Nasscom’s K Purushothaman. He attributes that success at least in part to Sundararajan’s vision.

“The interesting part is that the demand came from the people, the panchayat. They wanted to make their district 100 percent e-literate. We responded to that need,” says Sundararajan. But that was no easy task back in 2002. There were no similar projects that she could look to and learn from. Infrastructure was lacking and the solution had to be both scalable and enduring, drawing sustenance from citizens seeing value in the services provided in the centres and from entrepreneurs who saw a business opportunity.

During the early stages of the project, Bedi remembers Sundararajan visiting each and every centre, asking questions and getting feedback from users. The attention to detail helped. Citizens saw the value in the service Akshaya provided, and the huge public support for Akshaya is one of the reasons it succeeded, says Purushothaman.

Government, as well as citizen demands, can drive innovative projects. Impressed by Akshaya’s success, Rajasthan’s government wanted Sundararajan to lead an ambitious financial inclusion project, though a change in government meant it was never completed. “Political risks are inherent in some of these projects. That’s what you learn,” she says. But given a chance, they can succeed.