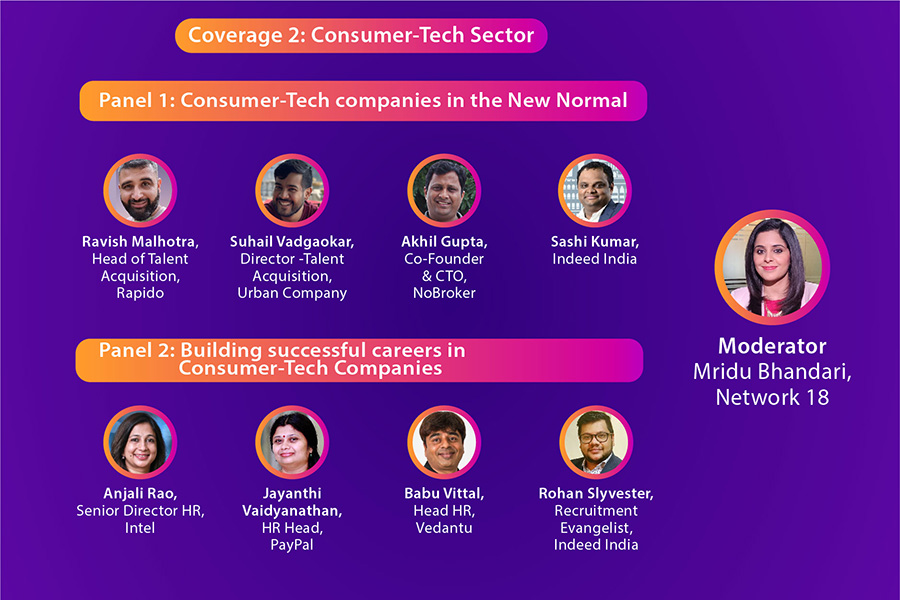 Consumer behaviour has undergone a transformation since the pandemic began. Access to basic services, like healthcare, education, financial services and shopping for essential commodities, have moved online and there is a tremendous increase in the use of digital payment gateways. All these new trends have implications for consumer-tech jobs of the future.

Forbes India Jobs of the Next Decade, powered by Indeed, endeavours to give job seekers a glimpse of opportunities of the future. A recent virtual webinar under this banner deep-dived into different industry sectors, to find out what can be expected in the consumer-tech job space over the next few years.

By itself, consumer-tech is a huge field and there are various nuances and roles that fall within this broad domain. Even before the pandemic, there has been a considerable interest in consumer-tech. However, as businesses innovate to meet changing consumer demands and behaviour, it has influenced the dynamics for employment opportunities in this space.

“As access to the internet grew, we saw consumer-tech growing in tier 1 cities,” recounted Sashi Kumar. “However, social distancing compulsions, in conjunction with the increased smart phone base, meant that the use of consumer-tech went into smaller cities and towns in India too.”  Another factor that has helped accelerate consumer-tech, specifically in the Edutech sector, has been the need to upskill. “People who are already in jobs feel the need to upskill to compete effectively,” he added. “So, there has been a 12% increase in number of job-postings in the Edutech sector between March and Aug, 2020, while the number of job searches increased by about 34% during the same period.”

Touching on the sensitive subject of job losses during the ongoing crisis, Ravish Malhotra said, “Last year, 4 million people lost their jobs. But as an organisation, we are expecting a V-shaped recovery after the second wave of covid. People with talent will always be in demand, but more specifically, we expect a boost in jobs related to ML, automation, AI and profiles for the education sector.” He pointed out that with the recovery, there would be a different perspective towards job roles. Another change driver was that organisations have realised over the past one and a half year that there are certain roles that do not require a person to come into the office.

Sharing his view on the future, Suhail Vadgaokar said, “One thing is clear, whatever we build now will be built on the back of phenomenal technology. That’s where the investments in terms of hiring and building talent is going to be. Whether it is engineering or product or design, everything will be digital.” In the foreseeable future, investing heavily in human resource professionals will also gain importance with remote or hybrid working arrangements, which have their share of challenges. “It will take a lot of business partnering to ensure that people succeed and feel good about what they are doing and the organisation’s morale remains high.”

Offering the real estate sector perspective on consumer-tech, Akhil Gupta said, “Previously, home viewing was a physical exercise and no one could have imagined that flats could be purchased on video calls. But now, people virtually visit numerous flats, using video and live tools. Then, once they shortlist a few, they may visit and close the deal.” With the pandemic, people are moving more towards digital solutions, using AI, VR and other tech tools. “Technology was going to play a role as we went forward anyway. But the pandemic has catalysed the use of technology by about 5-7 years.” He expects the demand for people with technology skills, software engineers, app developers, etc. to increase. “But there will also be a greater need for people with a sense of human understanding. Work from home needs a lot more investment in mental health and ensuring that people are at high morale. So, companies will have to invest heavily in human capital also.”

The participants went on to discuss the kind of human capital that consumer-tech companies were looking for and how the youth of India could upskill themselves to take advantage of these opportunities. They also touched upon the growth of the freelance and gig economy as a result of tech facilitation and the constant need and opportunity for online skilling. They highlighted sectors which will lead, in terms of hiring for new age jobs, like AI, automation, product design and cyber security and the kind of qualification required by start-ups that are hiring. Last, but not the least, they highlighted the importance of attitude over conventional degrees, on the job training offered by corporates, corporate collaboration with educational organisations and the ability to develop soft skills and customer connect skills. The panellists also shared their optimistic views on their own company’s hiring numbers, need for caring for mental health and creating work-life continuum.

The second panel discussion focused on “Building successful careers in consumer-tech companies”. Eminent industry guests, including Anjali Rao, Senior Director HR, Intel; Jayanthi Vaidyanathan, HR Head, PayPal; Babu Vittal, Head HR, Vedantu and Rohan Slyvester, Recruitment Evangelist, Indeed India, shared their insights and experiences.
They discussed a range of issues from what it takes to build a successful career in consumer-tech to promising high-growth career tracks that will be available over the next couple of years. They also offered counsel on how job seekers should innovate and really stand out in the current competitive environment.

Fascinated by the ancillary changes that had been wrought by the pandemic, Jayanthi Vaidyanathan observed that there has been an explosion of demand in consumer-tech related segments, such as on-demand delivery services for fresh produce, online education, social engagement platforms, gaming, OTT, collaborative tools, e-pharmacies, online consulting, and many more. “It’s like we’re at the turning point to a super-highway which has opened up for us.” An interesting development she recounted was that at Paypal, there was a significant rise in ‘silver tech’, which simply implies that older generations had begun adopting digital payments. “People over 50 were the company’s fastest growing segment since March-April 2020,” she shared.

Babu Vittal agreed, saying, “It’s been a very interesting year. Within a matter of one week, our sales went completely online from being completely feet-on-the-street.” On the technology and product front, his company recorded a lot of new job openings. “There are also jobs that are completely new and not so well defined – like ‘Engagement’,” he said, “which involves engaging multiple people from an organisation who are spread across multiple geographies. This is not housed within human resources or community development. It’s spread across multiple facets within the organisation.”

Rohan Sylvester shared some interesting statistics from Indeed’s database. He said, “This is not specific to the consumer-tech sector but overall, job openings for AI related jobs saw a 28% increase from Aug 2019 to Aug 2020. Job-seeker’s searches for remote teaching jobs jumped by 212% and postings for these roles also increased by 93% between March and Aug 2020.” He added that Sales and marketing roles and content, particularly in the Edutech space, can also expect to see increased demand.

Against the backdrop of the need for constant innovation, Anjali Rao advised, “For job seekers in the tech space, this translates into going deeper into domains and gaining greater technical expertise. It also requires a mindset where one is comfortable with ambiguity, building virtual connects with dispersed teams and constant innovation.” She highlighted emerging trends in talent acquisition, on account of dispersed work forces. “For people wanting to put themselves out there, it’s all about personal branding and being very comfortable with that brand in a non-physical kind of set up,” she said. Finally, she concluded that instead of talent going to the organisations, organisations will be going to the talent, as a result of all these trends.

The panellists offered the audience tips on the kind of skills and training that should be acquired and where job seekers should find these jobs. They highlighted promising jobs of the future for the youth and what the entire job search process should entail. The discussion also moved to the emergence of the gig economy and how job seekers can differentiate themselves, the need for flexibility and openness and the right attitude and finally the role of regulatory policies, like the New Education Plan, and their impact on skilling and eventually, job-readiness.

Both panel discussions concluded with invitations to virtual attendees to participate in question-and-answer sessions, where the panellists offered advice to those who had lost their jobs and were looking to join the consumer-tech space, described the prospects of technology veterans and first-generation learners, shared their views on the future of various specific lines of work and the possibilities of diversity hiring, amongst other concerns raised by the viewers. 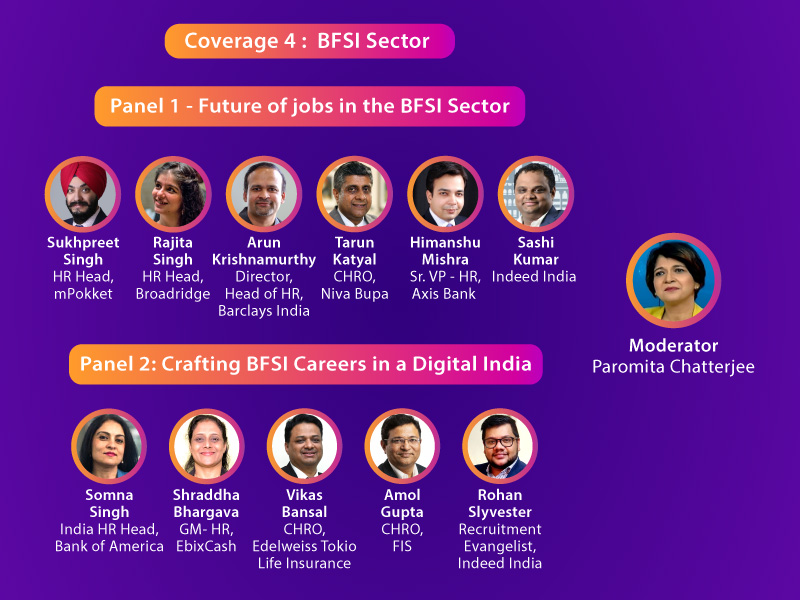 Resurgence of hiring trends in the BFSI sector 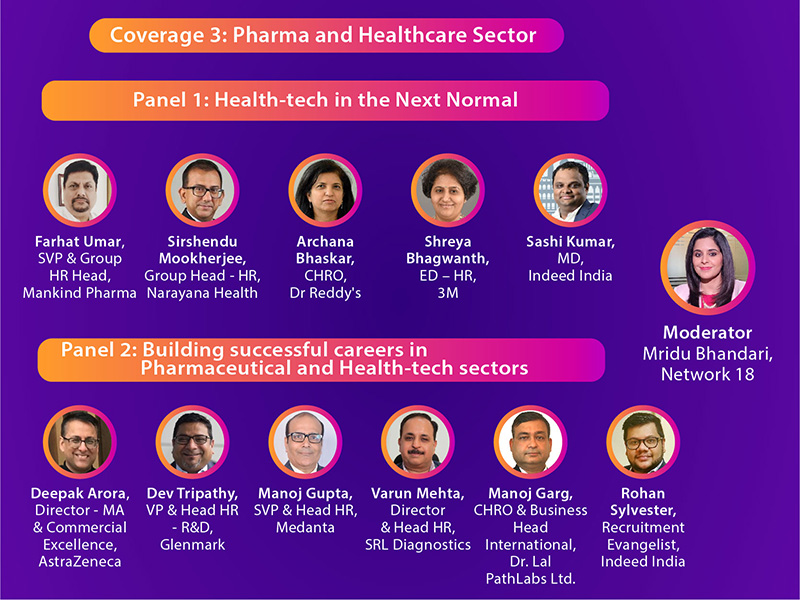 Emerging job prospects in the pharmaceutical and healthcare sectors 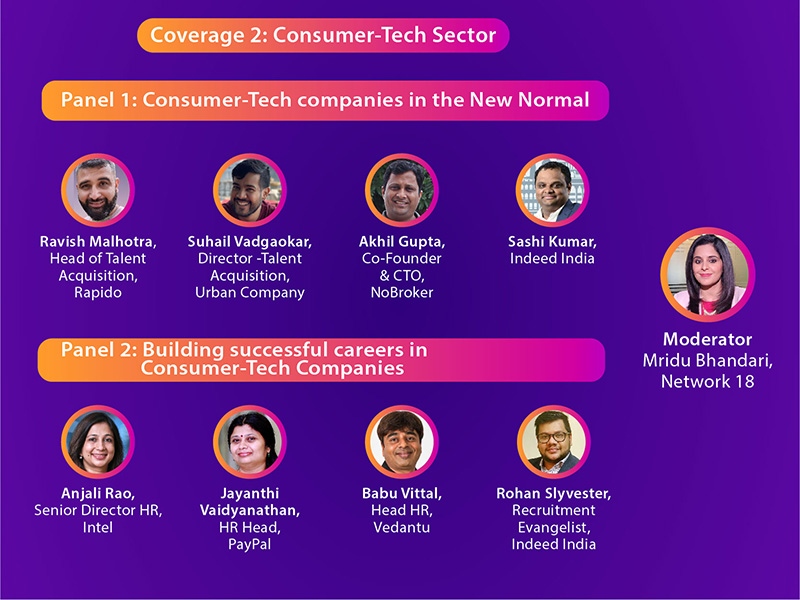 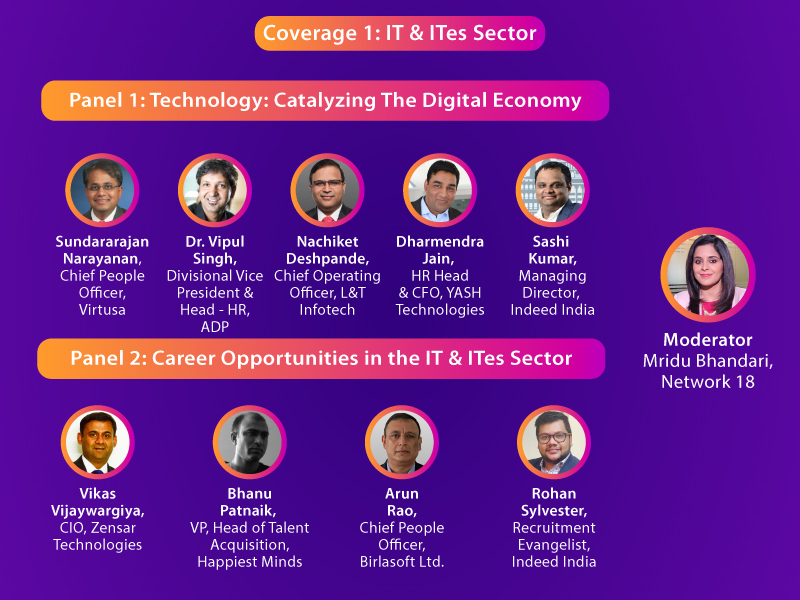 Forbes India, Indeed and industry leaders come together to explore jobs of the next decade 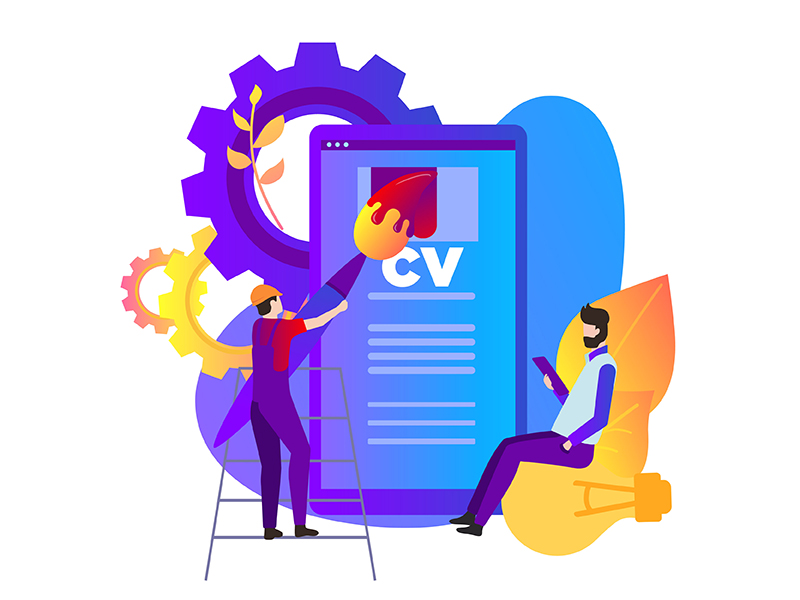 Everything you wanted to know about creating a Curriculum Vitae (CV) 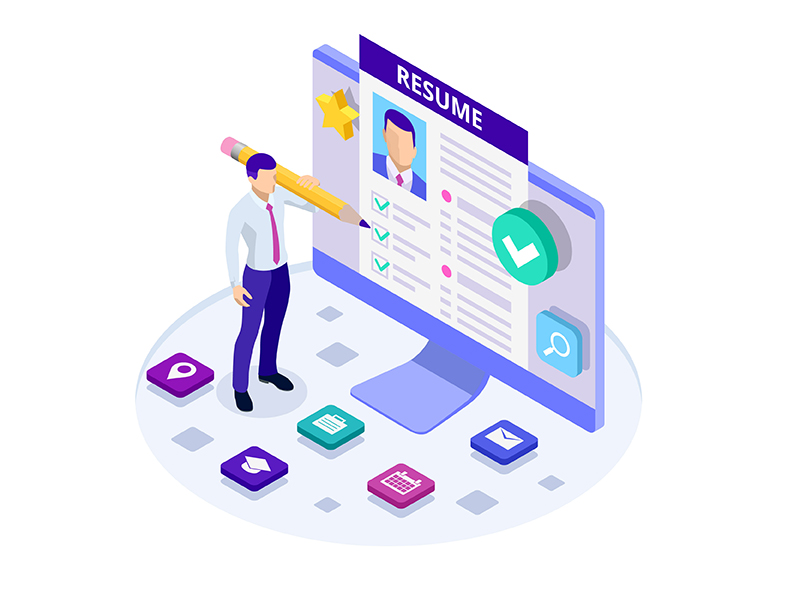 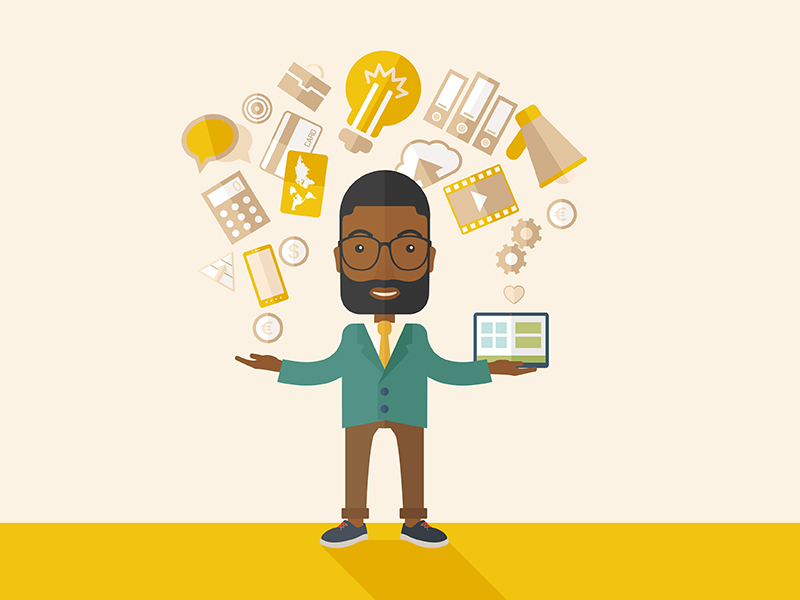 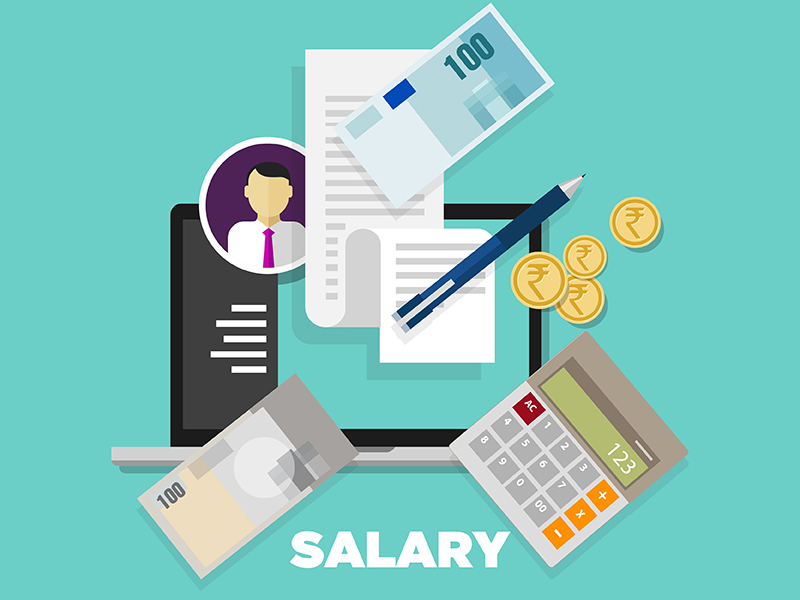 Your salary history: how to share it with potential employers