Prices of bitcoin have hit heady levels globally but there may be some method in the mania, although back home the Reserve Bank has advised caution 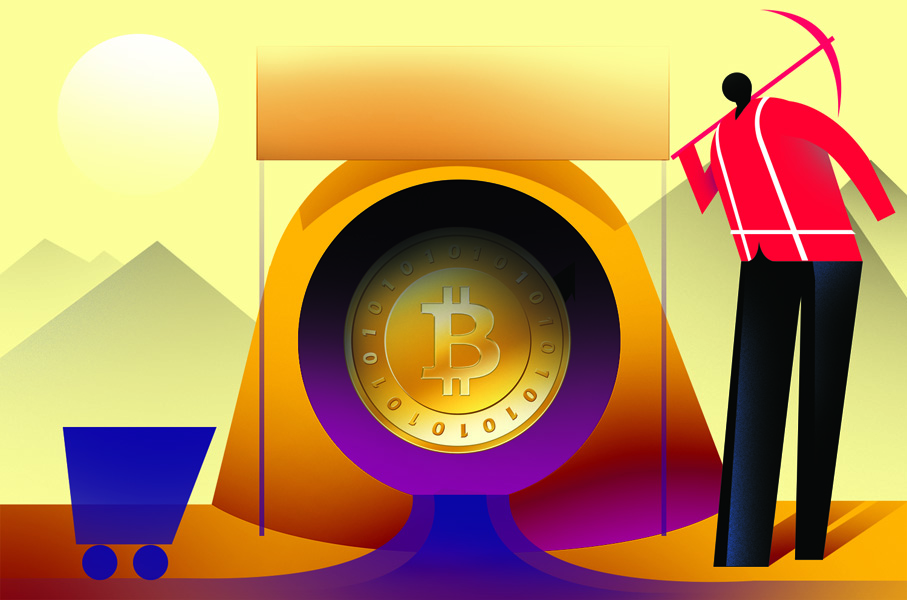 
On December 10, a new bitcoin futures contract listed on the Chicago Board Options Exchange (CBOE) and started trading at $15,400 levels.Nothing unusual there, considering that the digital currency was quoting a little over $16,000 that day in the spot market.

But the new contract didn’t quite stay around $15,400 that day. Soon, it surged to $18,850 before settling at $17,800. The heavy activity on the CBOE made one thing crystal clear: Bitcoin, as an asset class, had entered the investment mainstream—not just in the US but in India, too, where investors have been riding the boom, throwing caution from the Reserve Bank of India to the winds. Over the past month, the price of the virtual currency has shot up by 60 percent on the news of the CBOE listing.

The listing also means that bitcoins are now slowly, but surely, getting into the hands of institutions. The expectation is that this will bring sanity to valuations. After all, retail investors are not known for pricing an asset correctly. Now, at such high prices, individual investors are more likely to sell their bitcoins to institutional investors like hedge funds and alternative asset funds.

Most investors are valuing bitcoins as digital gold. Just like gold, bitcoin needs to be mined and is also available in limited quantity. Mining of bitcoin requires a lot of electricity and as long as prices remain high there will be more miners who will join the bandwagon. According to an article in Bitcoin Bytes, a website dedicated to news on cryptocurrencies, bitcoin mining consumes 9,636 gigawatts of energy a year in current conditions. In other words, bitcoins consume as much energy as 5,20,000 Canadians on a daily basis. But that may not be a reason to panic. Here’s why.

A bitcoin block—transaction data is permanently recorded in files called blocks—consumes an average of 183 MW, which costs $3,600. At a price of $18,850, the venture is still profitable as miners will now put in more powerful machines to mine bitcoins. The process will go on till there is an equilibrium where the incentives for new miners should ideally decrease as many of them will try to sell bitcoins at high prices.Around 1,800 bitcoins are mined daily through a million machines. If more machines come to the network, then the cost of production rises.

“Assume that today, miners are getting 1,800 bitcoins as rewards on a daily basis. In 2020, this number will go down to 900 bitcoins per day. So the number of bitcoins is reducing and miners are increasing,” explains Vishal Gupta, CEO, SearchTrade, a search engine company that uses bitcoins to pay users when they search on the platform. “This is raising the cost of mining. So if someone says bitcoins will touch $100,000 in some time, I don’t see that as unrealistic at all. Every time mining doubles, the price goes up by ten times,” adds Gupta.

Valuing bitcoins though may be a hazardous task. Aswath Damodaran, professor of finance at the Stern School of Business, reckons that since bitcoin is not a traditional asset class it does not have cash flows.

So what can go wrong? In a word, everything. While there is a strong case for bitcoin prices remaining high there is a chance that mining can become unsustainable due to oversupply.

More importantly, if bitcoin starts moving from a commodity to a currency then the currency will need to be put to use. If the use of bitcoins does not increase then there’s only one way for its price to go—down.


Toss of a Bitcoin

The digital currency has been on a bull run like no other.Stakeholders weigh in on the frenzy

Fair value is around $1,000
“I am a firm believer in blockchain technology and bitcoin but the current price rally is pure speculation. It’s a pump-and-dump scheme led by traders who are artificially raising the price of bitcoin. It’s a bubble that has to burst. In my view, prices will crash by around 80 percent in the second quarter of 2018. I have already started shorting my bitcoins, and am moving to altcoins [alternative cryptocurrencies], which are currently more stable. I think the fair value of bitcoin should be around $1,000.”
Sanjay Mehta
Serial entrepreneur-turned-angel investor

This is not a bubble
“With the launch of bitcoin futures trading by CBOE and CME, its credibility has increased and the big boys of finance—hedge funds and institutional investors—are taking positions. The recognition is also prompting retail investors to buy bitcoins for the fear of missing out. As more investors get involved, the demand for bitcoin increases, and because supply is limited [at 21 million bitcoins], the price is bound to increase. This price volatility will go on in the short term but in the long term, bitcoin’s value will go up. This is definitely not a bubble. It is the most amazing technology to have been invented after the internet.”
Saurabh Agrawal
CEO and founder of the bitcoin exchange Zebpay

Madness on both sides
“Which is more crazy: That bitcoin has a market capitalisation of a couple of hundred billion dollars, or that 11 trillion dollars of bonds are trading at a negative yield, which means that people are lending money with the full knowledge that they will not even receive the full principal back let alone earn any interest? After the global financial crisis of 2008, many feel that the actions of central bankers have been reckless, and it is no wonder that these people are attracted to a currency that is not subject to the whims and fancies of central bankers. There is madness on both sides (fiat currencies of advanced countries and cryptocurrencies) and it is best to view both with equal detachment.”
Jayanth R Varma
Professor of finance and accounting, IIM Ahmedabad and former Sebi board member

RBI reiterates its concerns
“In the wake of a significant spurt in the valuation of many virtual currencies and rapid growth in Initial Coin Offerings (ICOs), the RBI reiterates its concerns regarding the potential economic, financial, operational, legal, customer protection and security-related risks associated in dealing with such currencies… RBI has also clarified that it has not given any licence/ authorisation to any entity to operate or deal with bitcoins or any virtual currency.”
Reserve Bank of India
(From a circular dated December 5)