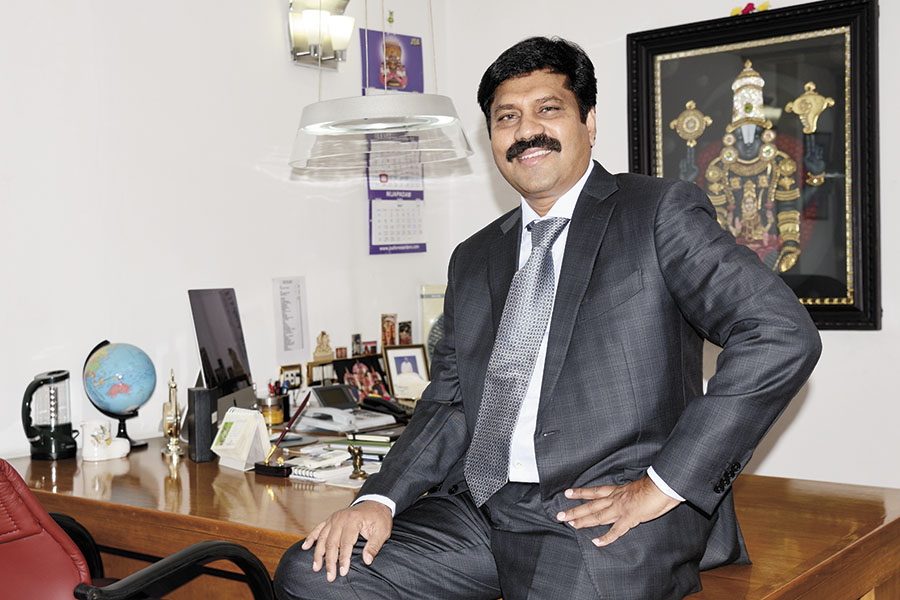 Alluri Indra Kumar, 55, the chairman and managing director of Avanti Feeds, is a man of few words. In the early 1990s, when he was executive director of the Hyderabad-based Avanti Feeds, he spotted an opportunity in the shrimp feeds market. The company, founded by Kumar’s father Venkateswara Rao in 1993, was at the time mainly involved in manufacturing proteins for medicinal and food products.

He foresaw the boom in aquaculture and believed that, as a ripple effect, the market for shrimp feed would expand. He started meeting fish and shrimp farmers to understand their requirements. “Farmers want quality feed. Over the years, we have supplied farmers quality products and thus our market share has kept increasing,” he says. In 1993, the company had a market share of 7 percent, which has gone up to 45 percent today.

Kumar had to consistently maintain the quality of the product year after year because farmers would not stay with a sub-standard product; shrimp feed is the single largest expense for the farmer and if the quality of the feed is not right, farmers quickly move to other manufacturers. Kumar understood this and created a customer-focussed company. The result now reflects in the stock price of the company as well. Over the last 10 years, the share price of Avanti Feeds has grown from ₹10 to ₹2,860—an annual growth of 76 percent, against the Sensex’s 6.5 percent in the period. In the last one year, the stock has shot up 400 percent, giving the company a market cap of around ₹12,800 crore as on November 3.

Simply put, Avanti Feeds is one of the fastest growing mid-cap companies in the Indian market and investors feel there is still a lot of steam left.

The stock is discussed at investor forums and many funds—such as the L&T Emerging Business Fund for which Avanti Feeds constitutes 1.94 percent of net asset value—have reaped the rewards of believing in it.

In FY17, Avanti Feeds reported total revenues of ₹2,732.66 crore and a net profit of ₹226.74 crore. While revenues grew at 35 percent, net profit went up by 42 percent over the last one year. Also, over the years, Avanti Feeds has maintained a very high return on equity (RoE) of close to 40 percent, and investors feel it can sustain this for quite some time. “We believe we will grow at around 20 percent for the next few years to come. That should keep our RoEs in a comfortable position,” says Kumar. The stock market too believes the company can maintain its growth rate; the price-to-earnings (P/E) ratio of the stock works out to 31 times its FY17 earnings.

Investors prefer companies that have a global market and one that grows fast. According to a 2013 World Bank research paper, aquaculture is the fastest growing form of food production in the world, with total fish supply expected to increase from 154 million tonnes in 2011 to 186 million tonnes in 2030. Aquaculture is projected to supply over 60 percent of fish destined for direct human consumption by 2030.

India is one of the fastest growing markets in this segment, where shrimps account for the bulk of seafood exports. The country has become the second largest exporter of shrimps to the US market, and Indian shrimps are sold at a premium. The overall export of shrimps in 2016-17 was pegged at 4.34 lakh tonnes; dominated by whiteleg shrimps, production of which touched 3.3 lakh tonnes in 2016-17, according to data from the ministry of commerce & industry.

Many people credit the success of whiteleg shrimp farming to Kumar. In 2009, the government of India allowed the commercial cultivation of whiteleg shrimps, which grow faster and are more resistant to diseases compared to black tiger shrimps. Avanti Feeds needed a partner to get the technical know-how for the manufacturing of feed for whiteleg shrimps. In 2009, it sold a 25 percent stake to Thai Union Group, one of the largest seafood companies in the world, for ₹5 crore in exchange for technical know-how. The move worked: The market share of the company went up from 25 percent in 2008 to the current 45 percent.

In 2008-09, Kumar also decided to expand to Gujarat, to cater to shrimp farmers along the west coast, by setting up a 50,000 metric tonne manufacturing plant at Pardi in Valsad district, at a cost of ₹40 crore. Most other feed manufacturers had their plants in Andhra Pradesh and Tamil Nadu. Avanti Feeds’ other plants are in Kovvur, Vemuluru and Bandapuram in the West Godavari district of Andhra Pradesh.

Kumar feels that the global market has huge potential for Indian aquaculture and that is the reason why many shrimp farming capacities are being added across the nation, especially in new places like West Bengal and Haryana.

The biggest challenge, though, is the lack of sufficient feed. To address this problem, Avanti Feeds is adding 1.75 lakh tonnes of capacity at ₹50 crore, which will take its total capacity to 6 lakh tonnes by February 2018. “But from here onwards the company will take time to move to 10 lakh tonnes. The growth of the company is also a function of the capacity that it adds,” says an investor, who did not wish to be named but who has been invested in the company for the last 10 years. The general rule is that every ₹100 crore of investment in capacity expansion will result in ₹1,000 crore of additional sales.

A long-term and meticulous planner, “he has been able to put up additional capacities at smaller costs than competitors due to in-house planning and execution,” says a senior manager who works closely with Kumar.

He has also built a team of in-house experts who help out with the planning process. The company follows project management techniques like Program Evaluation and Review Technique (PERT) and Critical Path Project Management (CPM). Kumar plans for two to three years and then spends time executing the projects; in fact, he likes to keep an ear to the ground and often lives at the project sites.

“The most important thing is to understand the market and how it is growing. Then we forecast our requirements. We take the approvals from the board and immediately start to implement the plans. I guess that is what has worked for us,” says Kumar. But to do this in-house, Kumar is totally dependent on his team. “To implement plans the team needs to be flexible. If you are not flexible and have a strong view then you have to prove your point,” he adds.

While Kumar is known for his compassion among his employees, his customers (the farmers) know him as the man who rescued them from the clutches of credit. Avanti Feeds changed the way feed companies worked with farmers. Earlier, distributors would take the feed from the companies on credit and give it to the farmers on credit. This led to problems because when diseases struck and farmers lost their earnings, they were not able to repay the company.

Avanti Feeds decided to do away with credit in their transactions with distributors, and switched to cash. This meant that even in the case of a disease outbreak or a natural calamity, Avanti Feeds’ earnings would not be affected. “We have a simple theory. Credit kills. It tempts people and allows them to take their business casually,” says Kumar. Farmers can now make better estimations of their yield and adjust their costs accordingly, since they know that they can’t rely on credit.

This system also means less pressure on the company’s working capital, as almost 85 percent of receivables are in cash. The company receives money throughout the year and gets credit of 15 days on payables. It has a cash surplus of around ₹400 crore.

Kumar, who is on the lookout for related areas to invest his funds in, would like to fully integrate his aquaculture business. Currently, he is looking at new fish feed as well as new species to develop for the farmers.

He has also entered the frozen foods sector, which accounts for 10 percent of his total turnover but is expected to grow. In 2015, Avanti Feeds set up Avanti Frozen Foods, with a 40 percent equity from Thai Union, and is working on a new export-focussed shrimp processing plant in the village of Yerravaram in the East Godavari district of Andhra Pradesh. He is also considering cultivating sea bass, a protein-rich fish with a strong demand in the export market.

Presently, Kumar’s focus continues to be on the end user. The farmers invest around ₹6 lakh per hectare in ponds to create infrastructure for shrimp farming; shrimp feed comprises 45 percent of the total costs. The company is working towards reducing the cost of the feed. “Feed is the single largest expense for farmers. Earlier, this expense was around 55 percent [of total cost], which we have brought down to 45 percent over the last eight years,” says Kumar.

Avanti Feeds is also looking to reduce the feed conversion ratio (the amount of feed given to the shrimps compared to their increase in weight). At present, 1.5 kg of feed generates 1 kg of shrimp; the company is trying to generate the same amount of shrimp with 1.3 kg of feed.
But achieving this target is easier imagined than done, since feed is a finely balanced mix of dried fish powder, deoiled soya cake and white flour. Thai Union is involved in the formulation of this feed.

That Kumar and Avanti Feeds are true value creators is endorsed by competition too.

“I could make out that he had planning and execution capabilities. He clearly had a growth path for the company,” says P Brahmanandam, managing director of Devi Sea Foods, one of the largest exporters of shrimps in India. And Kumar has proved him right, growing Avanti Feeds in leaps and bounds into a highly profitable company.

(This story appears in the 24 November, 2017 issue of Forbes India. To visit our Archives, click here.)