Manish Arora, and the making of kitschy cool 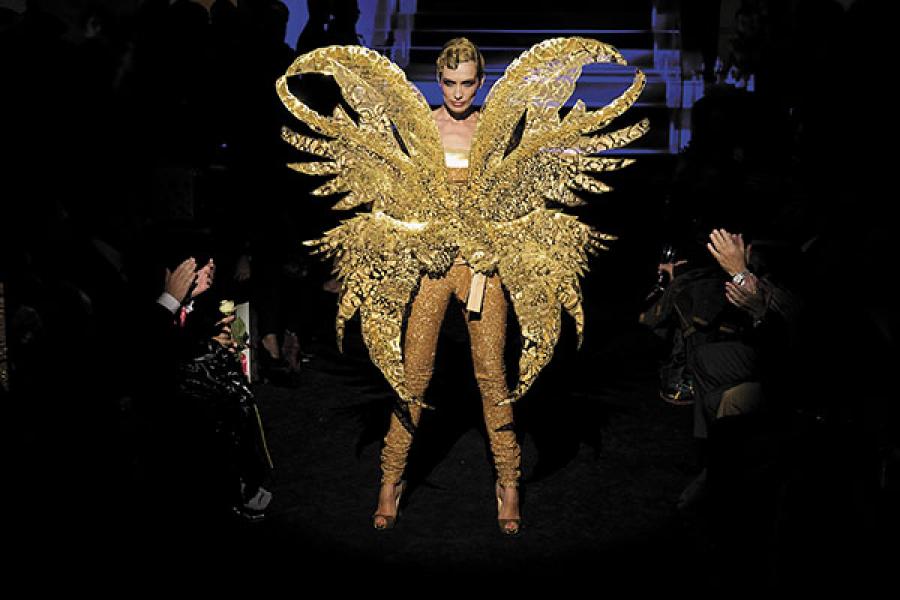 यहाँ पेशाब करना मना है (you are not allowed to urinate here.) This was not the sort of opening statement, emblazoned on a T-shirt, you would expect from a young designer; that too, right from his first collection, and in the first ever fashion week held in India, in 2000. Hopped up on energy and extravagance, the referencing of popular culture—a first for Indian fashion—was both camp and caustic. And while it might have caused a moment of shock and awe, by 2002 when Manish Arora sent down his other iconic Tee which read, ‘Full power, 24 hr. No sleep. No shower’, it seemed as if he was simply charting his trajectory. This show was under the label Fish Fry, a diffusion line of sportswear produced with Reebok, who had signed up with the maverick designer in 2001.

Right from the get-go, it was clear that the sense and sensibility of design was forever going to be inverted and subverted by Manish. His inspirations were commonplace but the execution was incandescent. Drawing from street art, calendar art, truck art, Manish, with his love for saturated colours, proved that pink really was the navy blue of India. Bright florals, Bollywood’s visual exuberance and Indian hyperbole were all infused with a shot of graphic psychedelia. It took me a while to understand why I had an instinctive, emotional reaction to his style, but then it hit me. Manish’s clothes looked like how legendary band Pink Floyd sounded: A sign of the times, with an eye on the future. Sharp, edgy, definitive.

In what can only be described as visual overload, Manish gave expression to a new movement in Indian fashion. Till then, the term kitsch was used dismissively, often to describe bad taste. A sensibility best left to the masses. But in a particularly Andy Warholesque moment (the artist is a huge inspiration for Manish), he elevated

the ordinary to the iconic. And the humble lotus/autorickshaw/cycle took its place next to the exalted paisley in Indian design.

What made it work was the irony and humour behind what I like to describe as the “Horn OK, Please” revolution. From god-printed T-shirts to the mudras of Kathakali dancers, there was an irreverence that altered the language of kitsch. If Manish worked on the world’s most famous mouse for Disney, you could be sure Maharajah Mickey would be carrying a mace. Once, he even used an Amar Chitra Katha story for an entire collection. The theatre of fashion seemed to be a term created for Manish’s showings. My all-time favourite is a scarf with typical Bollywood hero asking a buxom heroine: Will you marry me?

As early as December 2008, The Washington Post reviewed Manish glowingly: “Arora’s work in the past eight years has signalled the flowering of India’s pop art movement, which has elevated images from the streets and bazaars often dismissed as lowbrow and low-art. And as the chaotic nation of a billion-plus people hurtles toward becoming an economic powerhouse, rising consumerism and rapid urbanisation have brought small-town kitsch to the big cities. Artists and designers who chronicle “the new India” are now choosing these images and giving them the status of high art.” In the same piece, Manish had said, “There is no difference between my design and the sign on the roadside juice stall.” 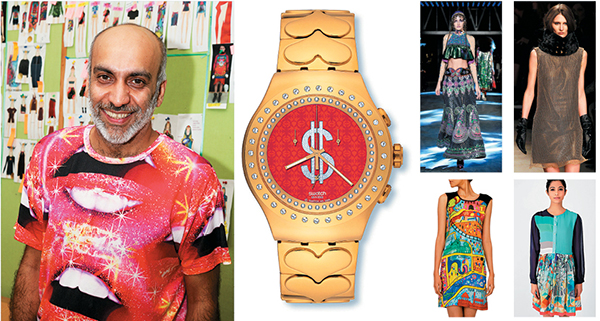 Images: Manish Arora, Paco Rabanne; Getty Images; 2016 shows: Manish Arora
(Clockwise from left): Manish Arora has given expression to a new movement in Indian fashion; among the designer’s prestigious collaborations is the one with Swatch; his collection at the Summer 2016 show in Paris had a strong Indian influence; he also had a stint with Paco Rabanne as creative director; Arora’s tie-ups have helped design houses like Play Clan and Quirk Box create a strong Cool India brigade

And yet, he is the only designer to have taken his co-opted Indian sensibility and translated it into a global idea through prestigious collaborations. My favourites include the ones with MAC (October 2008), Swatch (Spring/Summer 2009) and coffee-maker Nespresso (November 2010). Back home, his collection for Amrapali (Spring 2013) resonates with such savage beauty that the traditional label from Rajasthan gets a huge infusion of uber cool.

What these tie-ups have done is pave the way for other voices like Play Clan and India Circus to create a strong Cool India brigade. These design houses use graphic representation to celebrate and change the idea of “Horn OK, Please”. In fashion, successful names like Nida Mahmood and Masaba Gupta encourage a breed of new entrants like Quirk Box and The Jodi Life. At a moment when everything is being globalised and homogenised, this is an important moment for local identity.

Today, India may no longer be Manish’s favourite muse, but he references it constantly with his bold use of colour and inference. His Spring/Summer 2016 collection, at the Parisian nightclub Faust, drew from the ’70s but arrived there via India. Later, in an interview to WWD, he said, “My girl is going to the disco now, she wears heels, she needs to grow up. I was thinking Jerry Hall and Bianca Jagger at Studio 54, but mixed and matched with my Indian-ness.” Hearts, rubik cubes and floral patterns—all things that

were peculiar to that era back home—made their way on to the clothes.

Gravely-voiced, compact and quietly hyperkinetic, the 40-something started showing at London Fashion Week in 2005 and moved to Paris Fashion Week in 2007—where he still shows. After a stint at Paco Rabanne as creative director (2011-2012), he went back to focusing on his label and opened a flagship store in Paris in 2014. But whenever he can, Manish comes home to show. In fact, his label Indian by Manish Arora (launched in 2012 in collaboration with Biba) was one of the 16 labels at the Amazon India Fashion Week Spring Summer 2016 finale, this October.

In the past, Manish Arora was often described as “India’s John Galliano”. But I like to think of him as an original. A man who used his maximalist approach not to shout out change but to effect it.